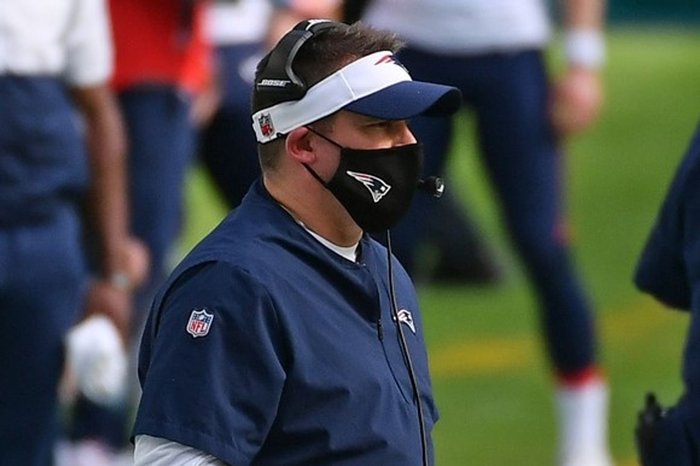 The Patriots didn’t have an obvious candidate to replace offensive coordinator Josh McDaniels.

McDaniels interviewed with the Philadelphia Eagles for their head coaching vacancy in a day-long vetting on Sunday in Palm Beach, Florida. After meeting with owner Jeffrey Lurie and members of the Eagles’ front office, McDaniels emerged as a favorite. However, Lurie was hesitant to hire the Pats offensive coordinator and a second round of interviews commenced.

The 44-year-old told reporters at the end of last season that he still has aspirations of being a head coach. However, failing as a head coach in Denver, leaving the Colts at the altar in 2018, and finishing 23rd in offensive DVOA this past season is taking away the shine.

There’s even a growing feeling among some Patriots fans that McDaniels isn’t the right coach to direct New England’s offense through the early stages of the post-Brady era.

For a team entering a massive offensive rebuild from a new quarterback on down, retaining McDaniels is good news that avoids even more uncertainty in Foxboro after Brady’s departure.

Along with running meetings and offensive periods at practice, McDaniels is the teams’ primary offensive play-caller and architect. Bill Belichick might have a hidden gem up his sleeve, but identifying an obvious replacement for McDaniels is challenging, especially given the vast amount of responsibilities in McDaniels’s job description.

Former Patriots wide receiver Troy Brown joined Belichick’s staff in 2019. Brown has worked with wide receivers, running backs, and returners. He’s a rising star in the building, but running the offense with just two years of coaching experience is a big jump.

After Nick Saban and Alabama named former Patriots staffer Bill O’Brien as offensive coordinator, the best external candidate was off the board.

Here’s a shortlist of external candidates with Patriots ties that could’ve worked. O’Shea coached New England’s wide receivers for years and ran their red zone offense towards the end of his tenure. He was at the top of my wish list for outside hires. But who knows if there was mutual interest for a reunion, and many of these options come with complications.

Bringing in a new offensive coordinator with zero experience in New England’s system would mean an overhaul of the playbook.

Former Pats quarterbacks coach Jedd Fisch spoke about his challenges with learning the current playbook in his one season with the team. Fisch is a veteran coach with two decades of experience, yet he said it could take years to learn the entire offense.

You’d have to let the new guy run his offense, or it wouldn’t work, which is another seismic shift for Belichick, who has maintained the offense’s foundation for his entire Patriots career.

With McDaniels back, he now begins his biggest challenge as the Patriots’ offensive coordinator yet: building a productive offense without quarterback Tom Brady. Something McDaniels has struggled with in his previous stints without Brady.

If McDaniels succeeds, it could reignite interest around the league in his candidacy as a head coach. Failing would mean he could be a coordinator for a while, maybe even the rest of his coaching career.

Current Patriots quarterback Cam Newton openly admitted to struggling with New England’s passing system’s complexities. The Pats run a passing scheme with tons of optionality. Routes can change based on the coverage, and it’s on the quarterback and receivers to read the defense’s structure in a timely manner and execute accordingly.

Although it’s difficult for receivers, it’s even harder on the quarterback, as he needs to read the coverage, know how every route converts, and then deliver an accurate ball to the open man.

A pocket-passing robot with 20 years in the system had it all figured out. A new quarterback with a different skillset? The timing and consistency weren’t there, so McDaniels shifted to locking routes and more half-field reads, which bogged things down even more.

Due to their issues passing the football and a strong rushing attack, the Patriots were arguably the NFL’s most conservative offense in 2020. New England passed the ball on just 40.2% of early downs, the lowest rate in the league, and Belichick ranked 26th out of 32 head coaches in go-for-it decisions on fourth down.

In an era where the best offenses are pass-heavy and aggressive, the Pats were run-first conservatives that never trusted their offense.

Along with Newton’s struggles in the old scheme, McDaniels, affected by lacking practice time due to the pandemic and Newton signing late in the offseason, couldn’t do enough to amplify Newton’s running abilities.

The Patriots quickly integrated basic designed quarterback runs, read-option schemes, and a couple of run-pass option plays. However, the entire operation desperately needed more motion and compliments to their base running quarterback concepts.

New England ranked 17th in percentage of plays with pre-snap motion despite having an offense that needed deception, multiple running threats, and to switch the point of attack and create extra gaps on the line of scrimmage.

In their defense, the Ravens followed a similar path with Lamar Jackson. In his rookie season, Baltimore ran a similarly pedestrian option package until they promoted current OC Greg Roman. He brought all kinds of intricate details to catapult Jackson to league MVP in 2019. Roman did this once before in his first iteration of the Ravens’ scheme with former 49ers quarterback Colin Kaepernick.

So here is the challenge for McDaniels and Belichick, as the latter Pats coach needs to give McDaniels the groceries to make a better meal.

Every offensive coordinator would be hard-pressed to build a successful offense around the personnel New England had last season, and that’s on Belichick the GM to figure it out.

For McDaniels, he needs to put a non-Brady quarterback in a position to succeed, which could mean changing his system.

Earlier in the offseason, we discussed McDaniels going all-in on Newton or a young mobile quarterback (Trey Lance?) with a Ravens or Cardinals-style attack that creates organized chaos through option schemes to threaten defenses.

In the passing game, simplifying reads and route designs will help both the quarterback and new receivers hopefully joining the team this spring.

Still, with simplification can’t come ineffectiveness like it did in 2020. Adopting things like McVay/Shanahan bootleg plays, empty formations, or RPOs can organically create easier reads while still challenging the coverage.

Ultimately, McDaniels’s success or failure hinges on Belichick’s ability to give him something to work with in terms of personnel next season.

Like Belichick, McDaniels has a lot riding on succeeding without Brady. His hopes of becoming a head coach again are contingent on fixing the Patriots’ offense.