Lazar: Getting to Know the Three Newcomers on the Patriots Offensive Line 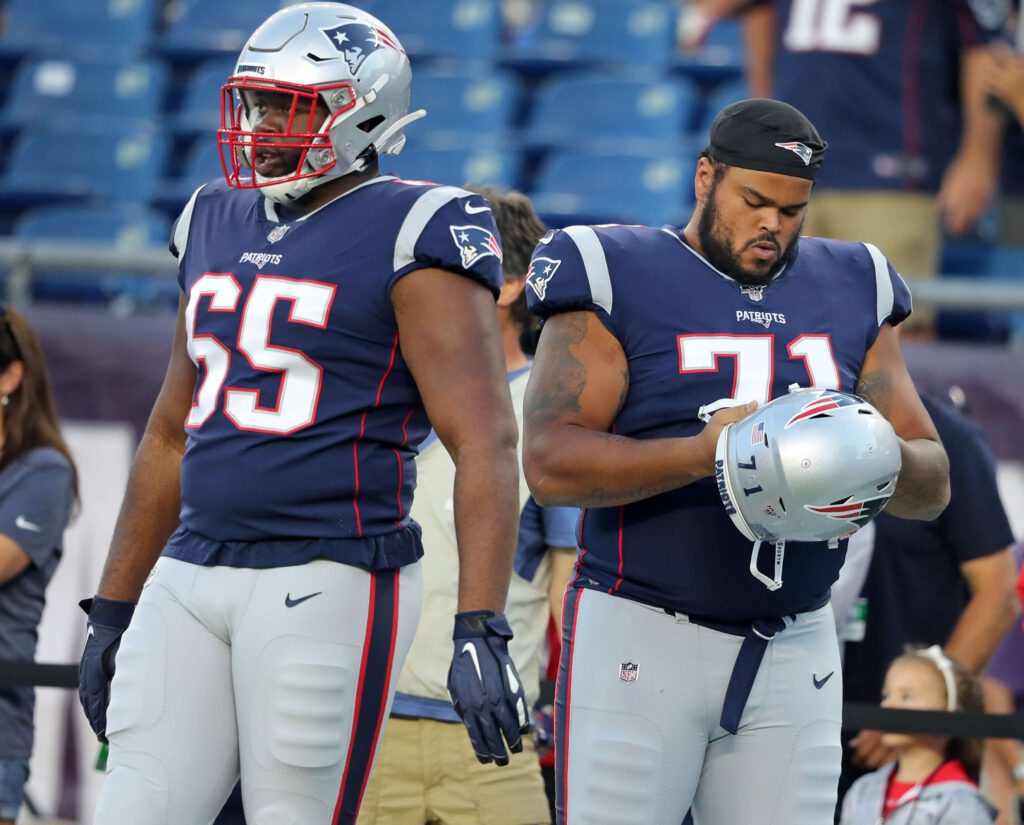 Instead, the Patriots will go with three newcomers behind the top unit trading for Jermaine Eluemunor (Ravens), Russell Bodine (Bills) and Korey Cunningham (Cardinals).

Skipper rejoined the team on the practice squad.

Andrews is out for the entire 2019 season due to blood clots forcing backup Ted Karras into a starting role, taking down a layer of depth on the interior.

Out of that group, Froholdt was the best bet to backup Karras after a great career at the University of Arkansas as one of the best interior pass protectors in the SEC.

“There are habits that we have to fix and techniques we have to get better with him. He’s working hard and trying his best to do it right. We are pleased with his development, but we have a ways to go.”

The rookie injured his shoulder in the preseason finale, which along with his slow development landed him on season-ending injured reserve.

The Patriots had depth concerns at offensive tackle all summer.

Starting left tackle Isaiah Wynn worked his way back and is now a full go for Week 1, but the talent was lacking behind him and Marcus Cannon.

During camp, Dan Skipper, who has ten NFL snaps under his belt, took starter reps at left tackle before Wynn was back to full health.

And he struggled with poor technique often lunging and looking awkward as he slid to mirror pass rushers.

The Patriots felt like they needed more game-ready talent, and that’s why they made the moves.

The last of three acquisitions to join the Patriots is former Bengals and Bills center, Russell Bodine.

Bodine has 74 career starts, which is the third-most by any center in the NFL since he entered the league in 2014.

However, the reviews on the veteran from his previous stops are mixed.

His former position coach in Cincinnati offered some optimism describing Bodine as a Patriot-type player due to his toughness, ability to communication and physical strength.

“I think he’s a perfect fit. Let me say this: he’s one of the toughest human beings I’ve ever been around,” coach Paul Alexander said via Greg Bedard.

“I think he really fits in well with what they do. He’s more of a traditional, NFL-style, blocky, big — he’s big for a center — and he already plays with the type of temperament and tenacity that the Patriots are really known for.”

Since NFL combine tracking began in 2003, Bodine’s 42 repetitions on the bench press are the eighth-most by any player at the scouting event.

“I don’t know about 42,” he said when I asked him if he could replicate his performance on the bench. “I’m excited to be here, excited to be apart of this organization. Obviously, have a reputation for winning, and my goal is to jump in with two feet and get caught up as fast as I can. Do what I can to contribute.”

On his 74 career starts, Bodine replied, “I’ve been fortunate enough to play a good amount of football, and I don’t think you can replace experience in this league. You pick one thing up from every game you play. It’s a new system, so you just try to get caught up as fast as you can.”

The Patriots also acquired the versatile Eluemunor from the Baltimore Ravens.

Baltimore’s fifth-round pick in 2017 said he feels comfortable playing either guard or tackle spots, serving as a backup to four positions.

This was interesting: #Ravens running zone read out of the pistol. Baltimore lined up new #Patriots OL Jermaine Eluemunor as a tight end on the right side. Defender tries to jump inside, and Eluemunor does a nice job of moving his feet to wall him off as the run hits his gap. pic.twitter.com/7WX9DOm8ba

When the Patriots traded for Eluemunor, I did a twitter thread with some film from his start at left tackle against the Pittsburgh Steelers last season.

Eluemunor has an explosive initial kick slide, and it’s challenging for pass rushers to go through his chest to knock him back.

The spin out of Baltimore was that Eluemunor came in out of shape, failing his first attempt at the conditioning test, and didn’t meet expectations.

Although the 24-year-old acknowledged the issues, the Patriots’ conditioning program is already having an impact on him.

“I heard about the conditioning, but I didn’t know it was like this. It’s full effort, so even if you’re tired, you think you’re done with practice, and you aren’t done, you have to run the hills. That was new to me. I’ve never run after practice like that.”

In college at Texas A&M, Eluemunor was a standout on the offensive line in his final season starting at both right guard (three games) and right tackle (nine games).

And that’s also where he first met coach Scar at his Pro Day, signifying that the Patriots’ interest in him dates back to the 2017 draft.

“My college OL coach, coach [Jim] Turner and him are good friends. Coach Scar actually came to my pro day to work me out. So I got a feel for it then, but I’m excited to come here. Play, get coached by him, it’s definitely a grind out there.”

As far as learning the playbook and getting caught up goes, Eluemunor told me that he’s working together with fellow newcomer Korey Cunningham.

“Me and Korey [Cunningham] worked with Coach Scar early this morning until now. Trying to get in the playbook, trying to ask questions, looking at the film. Me and him [Cunningham] are just working together trying to get everything.”

“Try to catch up to the rest of them because the season starts now. I don’t think you’re going to have the ‘oh, it’s okay you’re new here,’ it’s the Patriots. You have to learn the playbook and go out there and perform.”

Cunningham, a seventh-round pick by Arizona, started six games at left tackle for the Cardinals last season and flipped over to right tackle during the 2019 preseason.

“I actually went to college as a 200-pound tight end, and then I grew there. Being able to start two seasons at both right and left tackle, that was a great experience,” Cunningham said of his time at Cincinnati.

On his time in Arizona, he called starting, “a humbling experience to get a chance to play ball against some of the greats in the league.”

In those six starts, Cunningham gave up 18 quarterback pressures and ranked 62nd out of 80 tackles in PFF grade (60.4).

Evaluating his tape, he’s explosive off the ball and strong, but he struggles to change directions and his feet are a bit heavy.

He also spoke about “a lot of face time lately” with his new position coach and teammate in Eluemunor.

“We’ve gotten a lot of face time with him [Scar] lately. Over the weekend, all that stuff. Sitting down, meeting with him. Learning the playbook, and he’s a great teacher.”

The Patriots added players with more NFL experience, starter-level physical traits and versatility to back up multiple positions.

Although the moves put into perspective how thin they were along the offensive line, at least they took an aggressive approach to address the problem.