Lazar: Great Year for the Patriots to Need Linebackers, With Several Popping at the Senior Bowl

The 2022 NFL Draft is a great year to need a youth movement at linebacker. 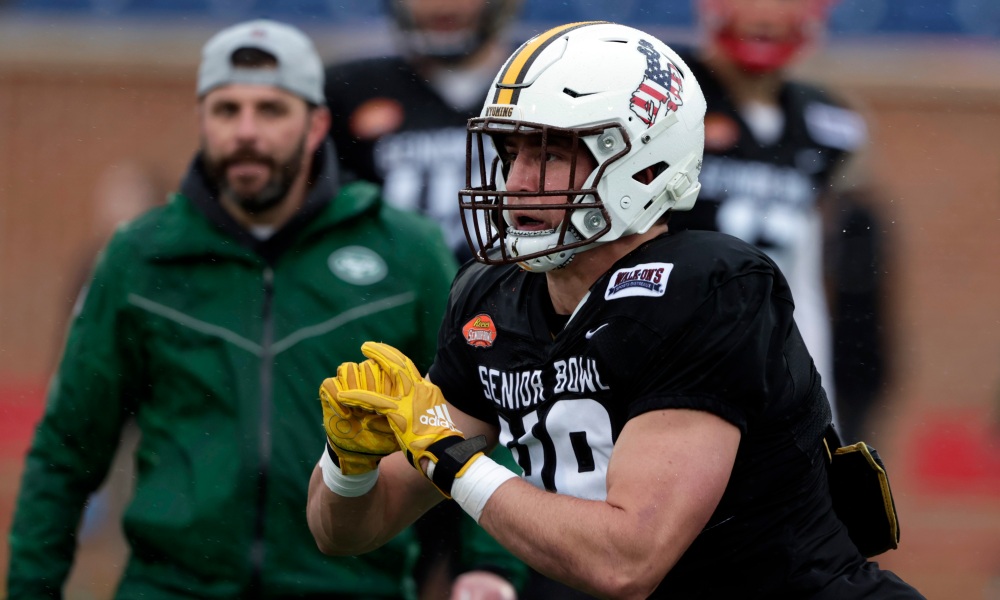 Arguably the biggest area of need for the Patriots defense heading into the offseason is at linebacker.

With an aging Dont’a Hightower and Ja’Whaun Bentley heading towards free agency, the Pats are at a crossroads at a position where they were exposed at times in the 2021 season.

New England needs sideline-to-sideline movers who can chase down ball carriers in space and hold up in coverage. There will always be a place for hard-hitting second-level defenders in Bill Belichick’s scheme, but a compromise between the two styles is needed in Foxboro.

After several popped during last week’s Senior Bowl, the good news for the Patriots is that the 2022 NFL Draft is a great year to need a youth movement at linebacker.

The Patriots are always searching for talent at the Senior Bowl, and there were three standouts from last week’s event that have intriguing tools that fit New England’s prototype at the position.

Starting with Wyoming’s Chad Muma, the Mountain West’s Defensive Player of the Year measured in at 6-foot-2, 241 pounds with some size to go along with his athleticism. Muma’s instincts to diagnose blocking schemes, sure-tackling, and fluidity in coverage make him a tackling machine.

On the final play of the half in Saturday’s showcase, top quarterback Malik Willis nearly ran for a touchdown as time expired, but Muma chased him down in the open field to make the stop short of the end zone.

Another Senior Bowler that fits the Pats’ mold is Cincinnati’s Darrian Beavers, whose athleticism surprised everyone in Mobile.

At 6-4, 252 pounds, Beavers meets the Pats’ typical thresholds for an every-down MIKE linebacker and plays the game with terrific physicality and a nose for the football against the run and as an interior blitzer.

However, scouts were concerned about Beavers’ ability to play in space and in coverage at the next level due to his size.

Darrian Beavers (#Cincy LB) with the fantastic coverage rep on Trey McBride, really impressed with the quickness and physicality he put together here. pic.twitter.com/VZPfxdxAiR

With a terrific week in coverage, Beavers put some of those concerns to bed in Mobile, showing plenty of athleticism and excellent instincts to guard running backs and play in low zones.

Then, there’s Georgia linebacker Channing Tindall, who has less in-game experience than Muma and Beavers but makes freaky plays in space as part of the fastest defense in college football with the national champs.

In fact, the top three linebackers in our initial rankings are potential first-rounders come April with Nakobe Dean, Devin Lloyd, and Alabama’s Christian Harris, while Georgia’s Quay Walker dropped out of the Senior Bowl and is also an intriguing player.

Alabama prospects always have a leg up when predicting Pats draft targets, and Harris is another ‘backer that is just what the doctor ordered.

The Crimson Tide linebacker has elite play speed with ridiculous closing burst to the football, makes plays in coverage, and uses good pad level and a sturdy frame to take on blockers in the trenches.

We could go on and on about this linebacker class, which features 12 top 100 prospects and eight defenders who have immediate-impact potential in our view. There are also intriguing day-three options in Montana State and Senior Bowler Troy Anders=n and Wisconsin’s Leo Chanel.

Although Belichick doesn’t always do the obvious, looking for the next Dont’a Hightower or Jamie Collins in the middle of the Patriots defense feels like a necessity heading into the 2022 draft.

Speaking to those who attended the Senior Bowl, the Pats’ lack of speed on defense and the talent and depth at linebacker were two hot-button topics when you brought up New England’s draft strategy.

If you’re a team that needs a new chapter at linebacker like the Patriots, this is a great year to draft at the position.