Lazar: Here’s Why Patriots LB Josh Uche is Only Playing 40% of the Defensive Snaps 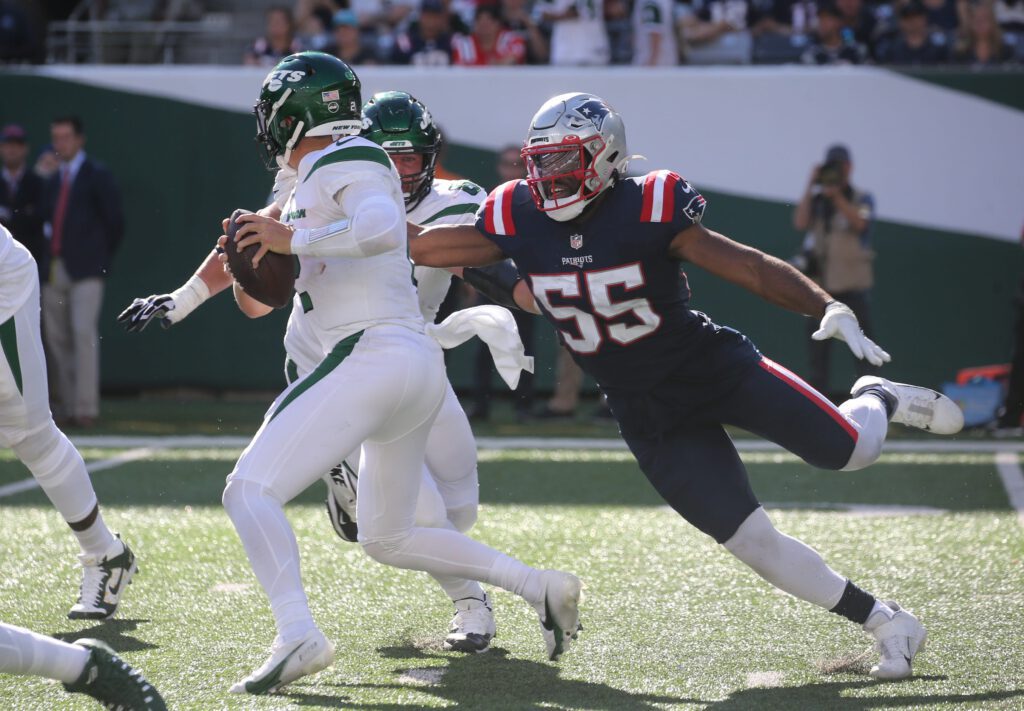 Second-year linebacker Josh Uche is an explosive athlete whose play-speed pops off the tape.

Bill Belichick’s linebacker mold typically looks like big-backers Dont’a Hightower and Ja’Whaun Bentley, who are physical run-stuffers and downhill pass-rushers. But are limited in space.

Uche brings a different level of athleticism, and it shows in his production as a pass rusher.

As he did this summer, Uche looks dominant at times as a pass rusher. In Sunday’s win over the Jets, the Pats stood him up over right guard Greg Von Roten to rush rookie quarterback Zach Wilson, and Uche recorded two sacks in a three-play sequence late.

In the season-opener against the Dolphins, Uche’s speed-to-power rush overwhelmed left tackle Liam Eichenberg, who tripped over his left guard as Uche went through him to Tua Tagovailoa.

Even Belichick sees a second-year leap in Uche’s play to start the season telling CLNS Media, “he’s [Uche] had a lot of improvements in his game and is gaining more experience, so hopefully he’ll continue to work hard and benefit from those snaps and experience and continue to be productive.”

Despite having a huge impact in the pass rush, the Michigan product only played 39.4% of the defensive snaps against the Jets and Dolphins. An athletic linebacker who plays fast, can rush or drop into coverage, and is often around the ball; what gives with the playing time?

An examination of the tape shows that the second-year pro is currently in the same conundrum as 2019 third-rounder Chase WInovich, who is also a productive pass-rusher.

In 50 defensive snaps, Uche was only on the field for ten run defense plays compared to 40 passing plays. In other words, he’s only in New England’s passing downs packages.

As we know, Belichick’s edge defenders’ responsibilities are to play disciplined and assignment-sound football to set a firm edge to keep rushers from turning the corner.

The Patriots’ system in run defense is not for players who want to scream upfield to make flashy plays or don’t possess the play strength to take on blockers at the point of attack.

Here, Uche is the play-side edge defender on an outside zone scheme. He loses the leverage battle with Jets tight end Ryan Griffin, and Griffin pancakes him to the ground, opening a path to the edge for rookie running back Michael Carter.

On Tua Tagavioloa’s rushing touchdown in Week 1, Uche was the read defender against a read-option design. As the “read” defender, Uche’s job is to contain the quarterback, leaving it up to the interior defenders to stop handoff to the running back. Instead, Uche crashes down and vacates his assignment as Tua walks in for six.

To those that watch the Patriots every week, it’s abundantly clear that Uche is a player on the rise, and it feels like he should be out there more than 40% of the time. And the decision to play practice-squader Tashawn Bower, for example, over Uche on early downs might seem odd.

However, we’ve been down this road before with players like Winovich, who are standout pass-rushers but don’t fit the system as sturdy edge-setters on first and second downs.

With only 11 NFL games under his belt, there’s hope that Uche will develop into a stouter edge-setter or improve as an off-ball linebacker to carve out more playing time.

So far, Uche has only played six snaps at inside linebacker. None of those came against the run, and he looks raw on his zone-drops over the middle. A work in progress there, too.

The Patriots are high on Uche’s physical traits and already trust him fully on passing downs in his second season.

Hopefully, he’ll grow into a more prominent role as he makes improvements in run defense.