The Patriots are playing not to lose based on their conservative decisions. 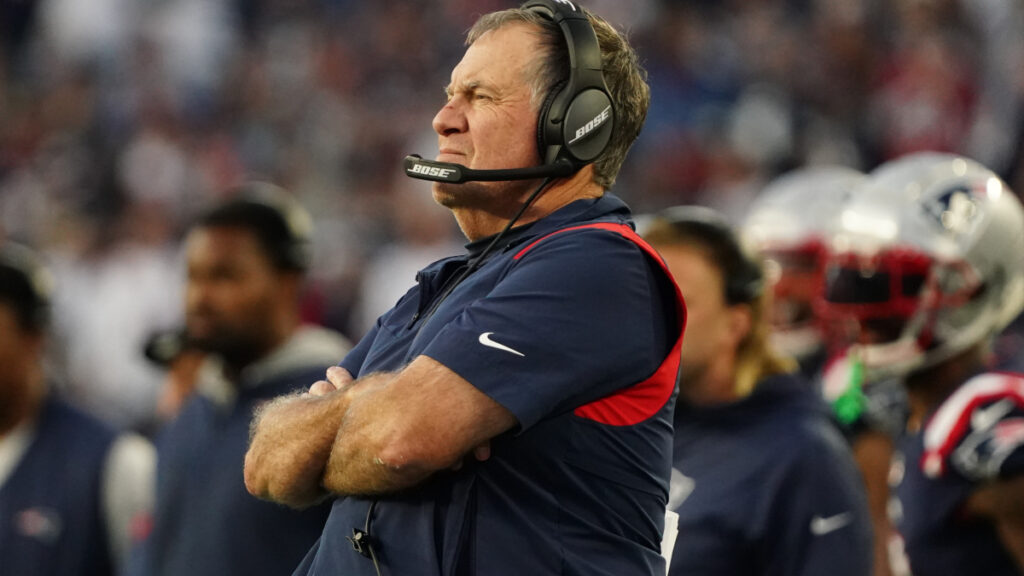 The Patriots were facing a fourth-and-two from their own 28-yard line while clinging onto a 34-28 lead against Peyton Manning and the Colts on the road at Lucas Oil Stadium.

Patriots head coach Bill Belichick knew that punting the ball back to Manning, who had led touchdown drives on three of Indy’s last four possessions, was a death sentence.

With one more play before the two-minute warning, Belichick trusted Brady and his offense to convert on fourth-and-two in their own territory rather than punt; the Pats were going for the win.

Unfortunately for New England, running back Kevin Faulk was tackled short of the line to gain in the flat, and Manning scored the game-winning touchdown four plays later on a short field.

The second-guessing of Belichick immediately began due to the outcome of the game, but what we didn’t know then was that the Pats’ head coach was ahead of his time.

Although Belichick’s decision to go for it on fourth-and-two was ultra-aggressive, the rest of the NFL is now becoming exceedingly aggressive with their fourth-down decision-making.

As win probability models take over for many decision-makers, teams are going for it on fourth down more now than ever.

The infamous fourth-down stop by Indianapolis’s defense in 2009 wasn’t a clear turning point. In fact, Belichick’s mindset on these decisions didn’t change until a few years after the loss in Indy (while Tom Brady was still here).

The Pats’ head coach has slowly become more conservative over the years, while the rest of the NFL zigs, Belichick, is zagging, going in the other direction by becoming the least aggressive fourth-down decision-maker in the entire league in 2021. 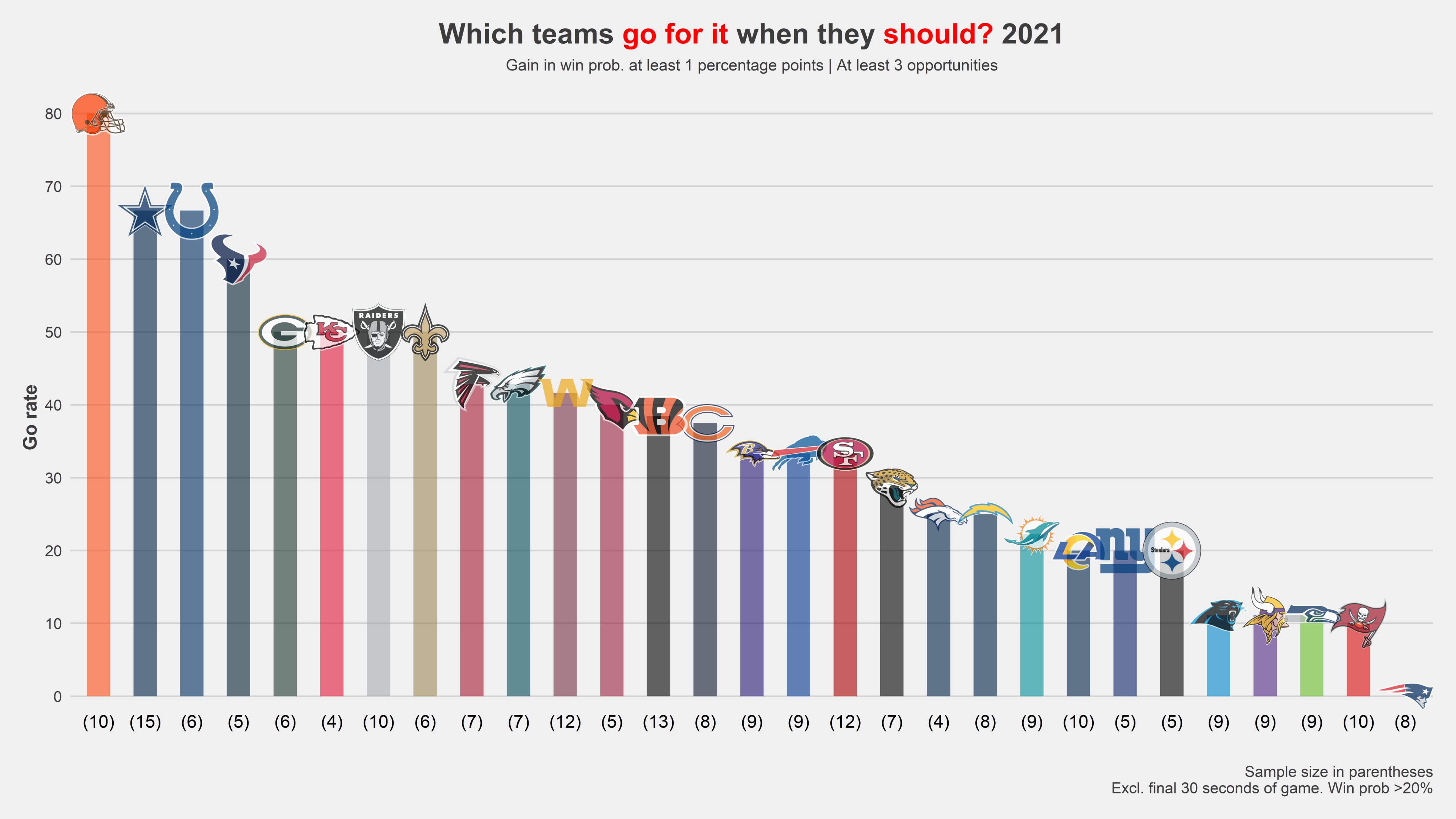 According to win probability models constructed by RBSDM.com, the Patriots are dead-last in how often they are going for it on fourth down when they should. New England has been in 41 fourth downs this season and has gone for it just three times, with 23 punts and 15 field goal attempts. On those 41 fourth downs, there were eight instances where going for it would’ve increased their win probability by at least one percentile, and they’ve punted all eight times.

In their most recent loss to the Dallas Cowboys, the Patriots punted the ball on three instances where their win probability would’ve increased if they had gone for it: fourth-and-one from the NE 35 (+3.4 go for it), fourth-and-two from the 50 (+2.0 go for it), and fourth-and-four from the NE 46 (+2.2 go for it).

Plus, despite the defense being on the field for over 80 plays already and Dallas driving into scoring territory on eight of their ten drives, Belichick punted the ball back to the Cowboys’ offense in overtime instead of going for a fourth-and-three from their own 46.

“No, not really,” Belichick told WEEI radio when asked if the Patriots considered going for it on fourth down in overtime. “With [Greg] Zuerlein, his field goal range, they can play on a pretty short field there, so if that’s when you’re talking about one first down could probably beat you there. So, no, not really.”

Belichick’s ultra-conservative approach is creeping into other decisions with his offense as well.

On top of the decisions to punt the ball on fourth down, the Pats ran one play (a one-yard run by Damien Harris) before kneeling out the clock before halftime with a 14-10 lead despite using their last two timeouts on Dallas’s final possession of the half to conserve 1:30 on the clock for Mac Jones.

Why didn’t Belichick give the Pats’ rookie a chance to put more points on the board at the end of the half? For years, New England won football games by dominating the “middle eight” minutes.

Despite setting up the “double score,” presenting his team the opportunity to control the middle eight, Belichick sat on a 14-10 lead. But why?

“Because we were getting the ball to start the second half,” the Pats head coach told CLNS Media. On Monday morning, Belichick then elaborated on that answer, saying, “ We went back and wanted to get settled in on the second half at halftime.”

Belichick’s answer is hard to justify. Getting the ball to start the second half is irrelevant since the Patriots would receive the second-half kickoff regardless of the outcome on the final possession of the first half.

Do you hold off on cashing your Christmas bonus because you also got a paycheck on the same day? Of course not. You take both checks to the bank and put that pool in your backyard, Clark. Maybe Belichick is worried about getting a one-year subscription to the jelly of the month club instead of a Christmas bonus?

As we found out a few years ago, Belichick scoffs at the idea of win probability models. In fact, he and I had an exchange about how he makes fourth-down decisions back in 2019.

Lazar: “How much of a role does analytics (win probably) play in your fourth-down decisions?”

Belichick: “For us? Less than zero.”

Lazar: “So is it a gut thing (if it’s not based on win probability, how do you decide)?”

Belichick: “I’m not saying it’s a gut thing. It’s an individual analysis based on the things that are pertinent to that game and that situation. I don’t really care what happened in 1973 and what those teams did or didn’t do. I don’t really think that matters in this game — or ‘83 or ‘90, pick out whatever you want. It’s not really my thing. And I like math, too, by the way.”

Belichick’s point that past performance does not equate to future success is fair, as is his take on the game flow, opponent, and situation factoring into the decision.

But here’s the question then: how does a head coach that went for it on fourth-and-two from his own 28-yard line against an MVP QB over a decade ago make an extreme slide in the opposite direction? What changed? And before you say it, this began before Tom Brady’s departure.

Cowboys quarterback Dak Prescott is not Peyton Manning. However, wouldn’t Belichick’s “individual analysis” of Sunday night’s game consider that Dallas has the number two scoring offense in the NFL, which the Pats failed to keep out of scoring range for most of the night? Why isn’t that a time to be aggressive like Belichick was in Week 10, 2009 in Indy?

Good luck getting a straight answer from Belichick as to why his in-game approach has changed so dramatically; we’ve tried on several occasions to no avail.

By the looks of it, the most recent plunge to the bottom of the league in aggressive decision-making relates to rookie quarterback Mac Jones and the Patriots offense.

Without an answer that makes sense from the head coach, it appears that the Pats don’t trust Jones and the offense fully to convert on fourth down or avoid a catastrophic play like a turnover that swings momentum.

Instead, they’d rather play not to lose than go down swinging trying to win. Belichick’s response to why he didn’t go for it in overtime is textbook loss aversion bias, the overwhelming fear of loss causing someone to make bad decisions.

Once upon a time, we chuckled at opponents who would play the Patriots tough but play not to lose by punting, kicking field goals, and not maxing out every possession. More times than not, it caused them to lose. Now, the Pats are the conservative underdogs.

The Patriots played well enough to win against two of the best teams in the NFL, Tampa Bay, and Dallas, and although Damien Harris’s fumble in Week 1 isn’t a game-management issue, they coached scared in that one too. In other words, this contributed to three out of four losses.

Belichick is his own blessing, and in this case, curse, which makes evaluating his performance as a head coach even more difficult.

New England is competitive because Belichick’s systems on both sides of the ball are sound, and he’s excellent at coaching his core techniques. Plus, the Pats’ game plans are still solid. From a schematic standpoint, Belichick gives the Patriots a clear advantage every week.

Still, for the Patriots to dig themselves out of a 2-4 hole, Belichick needs to start coaching to win rather than trying to avoid losing.

Celtics down Wizards 130-121 Without Tatum