Lazar: How the Patriots Should Approach Draft, Free Agency at Wide Receiver 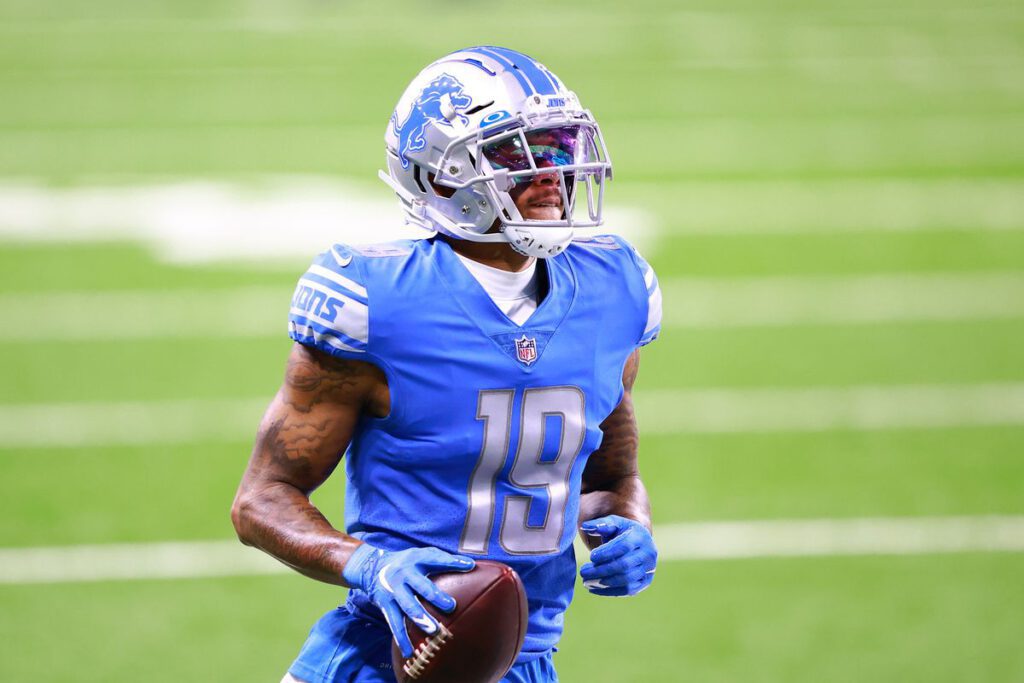 The Patriots need to overhaul their wide receiver room, and head coach Bill Belichick is prepared to do what it takes to make it happen.

According to multiple league sources, Belichick is ready to be a big spender in free agency, and his focus will be on the wide receiver position when free agency opens on March 17.

It’s unclear if Belichick will be bidding at the top of the market, but he will aggressively pursue offensive weapons, and there could be some sticker shock with New England’s signing if a top receiver bites.

Instead of trying to predict the Hoodies’ moves, here’s what I would do if I were the general manager of the Patriots after a thorough review of the draft and free-agent class.

My top priority would be acquiring a wide receiver that I would call a “space” player or a receiver with three-level speed that creates explosive plays before and after the catch.

Last season, the Patriots were 25th in yards after the catch, which was way too low. It goes beyond the need for a field-stretcher; it’s also a need for a playmaker with the ball in his hands.

Although it’s impossible to replicate his speed, the prototype is Chiefs wideout Tyreek Hill. Kansas City schemes all kinds of ways through motions behind the line, crossers, and vertical routes to present as many foot races as possible for Hill. Hill also ran 58% of his routes out of the slot, where he has more room to operate and can break in any direction.

The Patriots need that element in their offense, and not having it is failing to take advantage of the wide-open NFL created by rules that favor passing. In many ways, it not that different from how they used Julian Edelman during his prime years.

In free agency, the only player worth pursuing that possesses that skillset is current Panthers do-it-all receiver Curtis Samuel. Samuel, a former running back, checks all of the boxes above.

However, I would bypass Samuel for two reasons. First, the draft is insanely deep when it comes to prospects that fit the mold, and two, the Pats have struggled to draft and develop size/speed prospects (N’Keal Harry, Aaron Dobson, Chad Jackson types).

I wouldn’t be mad if Samuel is the move by any means, but I think you can get that in the draft this year.

By my count, nine wideouts in the 2021 class fit the mold that will go off the board in the first two days, and it could be more (in order of my rankings): Jaylen Waddle, Devonta Smith, Rashod Bateman, Kadarius Toney, Amari Rodgers, Amon-Ra St. Brown, Rondale Moore, Elijah Moore, and Jaelon Darden.

With the Patriots looking to the draft for a space receiver, I would spend big in free agency on a true “X” that can win on the outside against man coverage to pair with their version of Hill, Jakobi Meyers, a viable tight end, and a strong running game all anchored by a massive offensive line. We are in business now.

Outside of Ja’Marr Chase, who I still have concerns about in New England’s system, I’d be wary of drafting a size/speed receiver due to their struggles translating into the Pats’ offense.

Most of the time, those physical marvels are raw route runners that lack separation skills, and the savviness necessary to get open in an offense like Josh McDaniels runs with the Patriots.

With N’Keal Harry as evidence, New England doesn’t have the luxury of waiting around for a player like Harry to develop, so those guys usually don’t see a second contract with the Pats.

Along with Chase, I’d rule out prospects such as LSU’s Terrace Marshall, North Carolina’s Dyami Brown, or Michigan’s Nico Collins. They aren’t bad players, but they have a harder path to success within the framework of the Patriots’ offense.

The draft is loaded with “space” receivers, while the free-agent class isn’t, and the Patriots struggle with developing the physical size/speed freaks.

With all that in mind, it makes too much sense to sign a polished outside receiver that already has NFL success to avoid the developmental phase.

And it just so happens that this year’s free-agent class is stockpiled with receivers that fit as true outside receivers at different contract levels.

Below is a ranking of the “X” or outside receivers set to hit the open market based on their fit in New England:

(Note: I wanted to include Will Fuller here. But I don’t see Belichick paying an injury-prone player that kind of money. Also, I stayed away from wide receivers over 30, such as Marvin Jones. The whole idea is to get younger and more explosive on offense.)

Golladay was third in the league with a contested-catch rate of 71.4% last season. He was also second in the league in receiving yards on deep passes when he was fully healthy in 2019 (628 yards) and runs polished intermediate routes to set up his vertical route tree. In Detroit, Golladay was the type of target that you could align on the backside and go one-on-one against anybody, and Matthew Stafford had all the confidence in the world to throw him the ball in those situations. Plus, there’s plenty of nuance in his release package to gain favorable body positioning to use his size in various ways in different areas of the field. Although Matt Patricia’s role with the Patriots could hurt their standing with Golladay, it could also help in the sense that Patricia knows his medical history and work ethic. To lure him away from a star quarterback, the Patriots will need to overpay for Golladay. But when healthy, he’s worth it.

Davis might be a more likely outcome than Golladay, even if he isn’t as productive yet. Coming off a breakout season and looking for a big payday, the Patriots could blow Davis away with a contract offer that he can’t refuse. Whereas with Golladay, multiple teams will line up to pay that might currently have a better quarterback situation. Another angle that screams New England for Davis is that he was the fifth overall pick in the 2017 draft. Belichick loves to go after former first-round selections that went too high on draft day for the Pats to have a chance, so if New England had a high grade on Davis in 2017, then it makes even more sense. The current Titans wideout has developed into a legit vertical threat who was above-average at defeating man coverage and had the lowest catchable target rate in the NFL in 2020. In other words, more catchable passes for Davis should lead to even better production. On top of that, he was sixth in contested catch rate and is a reliable receiver on vertical and intermediate (crossers) routes that threw his weight around as a blocker in a run-first offense in Tennessee. We also know that Belichick likes players who have tortured him in the past. Davis would fit nicely into a Josh Gordon or Brandon LaFell type route tree for New England.

Patrick is by far my favorite value play for the Patriots to fill their need on the outside. However, he is a restricted free agent that will cost New England a draft pick to acquire on an offer sheet. That might make him cost-effective, but if Denver tenders him at the second-round level, then the Pats might be out. Nonetheless, Patrick showed us what he can do in the Broncos’ win over the Patriots last season (4 catches, 101 yards). He’s an ascending player with terrific size and a large catch radius that translated to a top-five finish in contested catch rate last season. Patrick combines enough variety at the line of scrimmage in his releases with a big frame that’s difficult to overpower down the field. The 27-year-old is also a builder of speed and becomes a runaway train in the open field after the catch, putting up better YAC over expected numbers than you’d think for a receiver that isn’t overly elusive. The Broncos took Jerry Jeudy and KJ Hamler with back-to-back picks in the top 50 of last year’s draft, so they have a lot invested already at the position. If the Patriots sign Patrick to an offer sheet, Denver might not match.

Many are souring on Watkins because the production doesn’t match the investment. But the Patriots aren’t paying him like a #1 and aren’t drafting him in the top five. As a complimentary field-stretcher, Watkins is a capable outside target with a top gear that is difficult to find. Although he doesn’t provide as much versatility as the players listed above, Watkins can have huge games at a moment’s notice and creates space for others to operate by taking coverage with him upfield. In an offense with a high-volume receiver, Watkins would provide a nice upgrade over Damiere Byrd as a deep threat. Kansas City had many mouths to feed, and it felt like after reviewing some tape, Watkins is still capable of more production if he sees a larger target share. He’s a tier or two below the top options but comes at a more comfortable price.

Let’s hope it doesn’t get to this point, but if it does, Agholor changed roles with the Raiders last year and had a sneaky good season. In Philly, Agholor ran most of his routes out of the slot, but Vegas put him on the outside, where he blossomed on vertical routes. Agholor had a career-high yards per catch average of 17.9 and surprised with his deep speed and ability to separate over the top. Although he wouldn’t be anyone’s first choice, Agholor is a serviceable NFL wideout that has experience playing both inside and outside. In years past, he’d be the type of signing that we’d be on board with as a complementary receiver to Gronk and Edelman, for example. Although the Pats don’t have Gronk or a healthy Edelman, the idea is that if they get a star pass-catcher that can carry the load, Agholor is a relatively cheap receiver that can be a part of a productive offense as he was with the 2020 Raiders in or 2017 Eagles.

Perriman has the body type of former Pats wideout Cordarrelle Patterson but is a much better vertical route-runner running a real route tree. The Jets wideout has the size and speed combination of Patterson combined with improved releases that help him create space to build up his speed off the line. Once he opens his strides, a receiver of his stature is challenging to contend with down the field; ask JC Jackson. After failing as a first-round pick with the Ravens, Perriman had a career renaissance in Tampa Bay’s vertical passing offense before the Jets wasted him last season. He serves as a beacon of hope for a player like N’Keal Harry because Perriman was once extremely raw in his route releases and wore coverage despite a rare combination of size and speed as a result. Now, he has developed that part of his game and can be a legit outside threat.

Contract projections via Over the Cap