Lazar: Hunter Henry is Exactly As Advertised in First Season With Patriots

Henry is one of Mac Jones' favorite targets in the red zone and on third down. 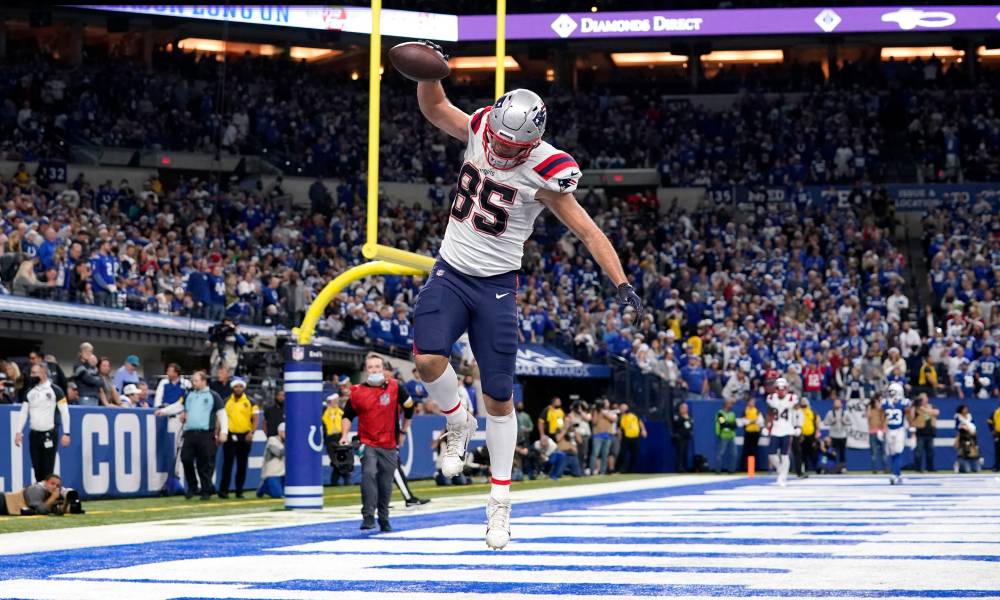 When the Patriots signed Hunter Henry to a three-year contract in March, it completed a decade-long quest for Bill Belichick.

Belichick had his eye on Henry since the tight end played for his coaching buddies in the High School and college ranks at Pulaski Academy and Arkansas.

“Pretty close to the previous scouting report from Kevin [Kelley] and Bret [Bielema],” Belichick said on how his expectations for Henry have matched up to the player he has seen this season.

“Hunter’s very professional every day. He’s a very consistent guy. You know what you’re going to get. You get a very consistent player that’s instinctive, very smart, and if you make a little adjustment in a route or a technique or how to read a certain play, he gets it the first time and understands what you need him to do and how the quarterback is looking at it and how to help the quarterback, how to help the play, how to create separation or spacing depending on what we’re trying to get done there.”

“He’s a big target. He’s got good hands, and he’s a hard guy to overthrow. He has a good catch radius and catches balls behind him and low and high. He’s really, like I said, a very consistent.”

After consecutive seasons at the bottom of the league in tight end production, it was a no-brainer for Belichick to get his guy in free agency.

Now 14 games into his Pats career, it’s working out exactly as planned with Henry, who has stepped into a complex scheme and is single-handedly out-producing New England’s tight ends in 2019-20.

Although coaches and scouts marvel at Henry’s well-rounded skill set, it’s his emergence as a go-to target in high-leverage situations and against man coverage for quarterback Mac Jones that’s paying huge dividends for the Patriots’ offense.

Henry is one of the NFL’s best weapons in the red zone, on third downs, and is fourth among tight ends in receptions against man coverage (15), according to Pro Football Focus.

Starting with Henry’s prowess in the red zone, he is responsible for eight of New England’s 14 red-zone passing touchdowns this season and ranks second in the NFL in red-zone TDs.

In their loss to the Colts, Henry caught both of New England’s touchdowns in the red zone.

On his first touchdown grab, the Pats’ tight end kept working across the field against a cover-six zone structure as Mac Jones climbed in the pocket to evade the rush. Henry, on a crosser, essentially has a one-on-one with the middle-quarter safety and beats Colts safety Andrew Sendejo with Jones holding the coverage in the middle of the field with his eyes.

Along with the athleticism to win foot races in the end zone, Henry has fantastic spatial awareness and knows how to use his 6-foot-5, 250-pound frame to box out defenders.

On his second touchdown catch, the Colts play a spot concept out of zone coverage at the top of the screen. The flat release out of the backfield combined with Jakobi Meyers’ vertical stem cleared out a pocket of space in the coverage. Henry sits down on the goal line to present Mac with a target, and it’s six more points for the Patriots.

Henry’s size and box-out skill came into play earlier too. This time, on third down, where 13 of his 14 third-down receptions have gone for first downs this season (92.9%, fourth-highest in NFL, min. 20 targets).

With the Patriots driving into Colts territory, they faced a third-and-four from Indy’s 23-yard line. New England runs a mesh concept against man coverage, with Henry and Meyers running intersecting crossing routes over the middle of the field. As Jones is pressured, he has enough time to ID that the middle of the field help defender is in the passing window to Meyers, meaning Henry is one-on-one. Displaying complete trust in his tight end, Jones lobs a pass to Henry and allows him to post-up the much smaller defensive back to move the chains (Khari Willis). 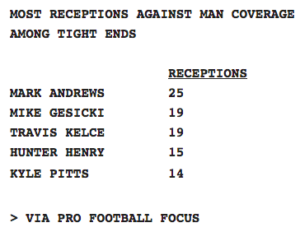 Sticking with opportunities against man coverage, Henry’s explosive and savvy route-running allows him to get open consistently, which is an area that the Patriots needed to improve.

Here, the Pats take a shot downfield to Henry off play-action. Although the defense is in man coverage, Henry’s man (Willis) incorrectly reacts to Nelson Agholor’s jet motion, which puts him out of phase at the snap. Henry takes advantage by exploding off the line and stemming upfield past Willis, ensuring he clears the Colts’ DB before breaking on the corner route. If he begins his break sooner, it’ll give Willis a chance to get back in the play. Instead, he carries his stem far enough upfield and snaps off the break, creating ample separation.

Although it often doesn’t work out this well with prize free-agent signings, Henry was precisely what the doctor ordered for the Patriots as a chain-mover and red-zone weapon at tight end.

Henry’s third-down production contributes to New England’s team success in that area, ranking seventh in third-down conversion rate. In the red zone, the Pats are struggling, ranking 24th in touchdown rate, putting into perspective where they’d be without Henry in that category.

The Patriots needed a return to respectability at the tight end position, and Henry has brought that, and then some.