Lazar: If Cam Newton Starts, What Does a Viable Passing Offense Look Like for Patriots? 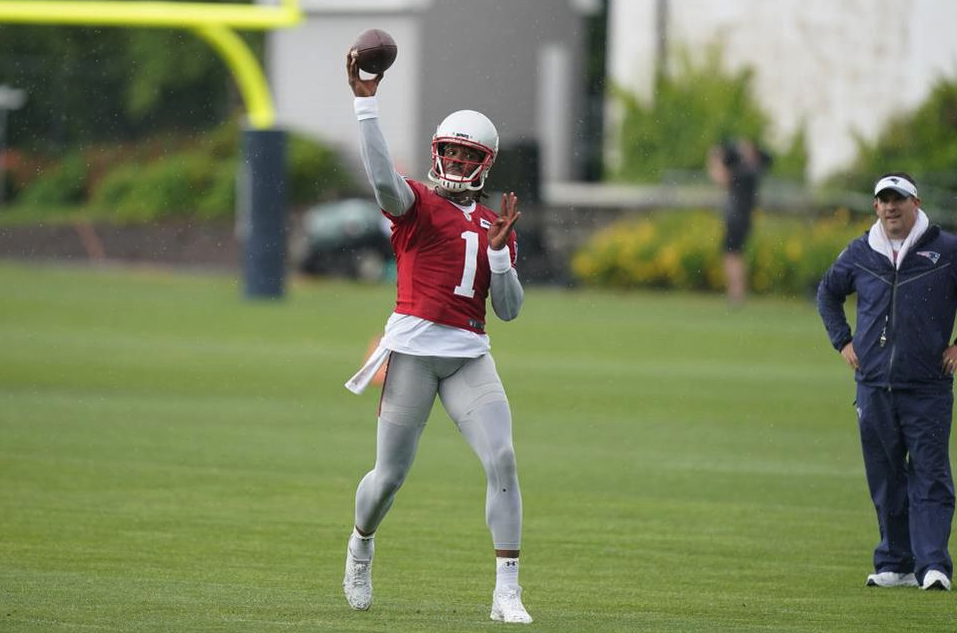 The roots of the Patriots offense were planted well before former quarterback Tom Brady became an NFL superstar.

In 2000, then Pats offensive coordinator Charlie Weis laid the scheme’s foundation that began as a run-heavy offense basing out of 21-personnel (2 WR, TE, RB, FB).

As the personnel changed, the offense morphed from run-heavy to wide receiver-centric (Randy Moss, Wes Welker). After that came two tight end packages (Rob Gronkowski, Aaron Hernandez), a fast-paced spread, and then back to run-heavy at the end of the Brady era.

Current offensive coordinator Josh McDaniels has adapted the playbook to evolve with the times and personnel in his 12 seasons at the helm.

But the foundational elements from Weis’s original install stayed the same, keying on optionality for quarterback and receiver, heavy play-action passing, yards after the catch with a horizontal attack, and a modified quick-passing component.

All of those core elements, according to Weis, fit New England’s first-round pick, Mac Jones, perfectly.

Speaking to the Boston Herald, Weis said, “decision-making and accuracy are his [Jones] top two qualities. With the foundation of the offense, everything we stood for, is what (Jones) is.”

Weis’s sentiments on Jones are beginning to echo through the walls of Gillette Stadium, “accurate, great ball,” one offensive player told CLNS media.

Although the rookie has all the makings of a future starter in New England, the job currently belongs to veteran quarterback Cam Newton as Belichick said following the 2021 NFL Draft.

Those that want to throw away everything Newton did in his first season with the Patriots because of extenuating circumstances in a COVID-modified season have a case.

However, the 32-year-old former MVP will never be as good of a scheme fit in McDaniels’s offense as Jones, which doesn’t mean Newton is bad, he just plays a different style.

Last season, Newton struggled to operate in McDaniels’s quick-game schemes and had trouble with throws where he was asked to lead receivers horizontally across the field.

Asking any quarterback to master the offense on Brady’s level is ridiculous; Newton was at his best when the Patriots let him see it and rip it, rather than trying to match Brady’s timing and anticipation.

According to Pro Football Focus, Newton ranked 38th out of 44 qualified QBs in passing grade on throws in less than 2.5 seconds (62.8), which speaks to the quick-game issues.

On horizontal lead throws, Newton’s accuracy percentage of 46% was noticeably below the league average on those types of passes (56%).

If the Pats stick with Newton while Jones develops, then McDaniels needs to highlight his strengths as a passer, which the Pats OC did during Newton’s best stretch of play in 2020.

In Weeks 8-11 of last season, Newton had the fourth-highest passing grade (85.5) in the league, and the Patriots offense was third in expected points added per play (0.149).

Newton’s completion percentage over expectation, a metric that measures downfield accuracy, was significantly better in that stretch (+3.6) compared to the rest of the season (-5.6) as well.

So the questions that arise from that are twofold: is that a viable NFL offense for more than four games, and what did McDaniels do differently to help Newton succeed?

As we mentioned, Newton had issues with the timing of McDaniels’s full-field progressions where decisive decision making, a quick release, and accuracy are critical components.

Here, Newton correctly reads the two-deep safeties in his drop to bring him to the “branch” concept to his right (slot out, outside fade). With the outside corner carrying the vertical route and vacating the sideline, Newton can safely throw to Izzo on the out route.  However, he hesitates, taking two extra hitches before releasing the ball to his open tight end and then forces Ryan Izzo to dive for the pass.

Although combining a quick release with leading receivers was an issue, Newton was an above-average passer on “stick” throws where he was throwing to a stagnant receiver.

On throws to stationary receivers, rather than moving targets, Newton’s accuracy percentage skyrocketed to 74% (league average – 68%), which was a good place for McDaniels to start.

To present him with more stagnant throws, the offense became more vertical in nature while the Patriots simplified the quarterbacks reads to let Newton play more freely.

In this play, the Patriots combined two elements that became must-haves with Newton at quarterback. First, McDaniels uses the offense’s alignment on the far hash to essentially give Newton a half-field read. Instead of receivers releasing on both sides of the formation, Newton’s only reading the right side of the field where he has a trips set. Newton’s accuracy percentage (71.4) and passer rating (145.8) were both excellent in these “ISO right” looks, per PFF.

Next, the route combination itself is a variation of the “spot” concept. The two outside receivers in the bunch set will stretch the defense vertically and cause the underneath linebackers to widen with their releases. Damiere Byrd and Jakobi Meyers create space for N’Keal Harry’s “spot” route, and Newton throws an accurate ball for a 12-yard gain.

Another way McDaniels gave Newton defined half-field reads was by moving the pocket.

McDaniels gives Newton a half-field levels-style concept where he reads the play-side outside corner and deep safety on both the plays above. The most likely scenario, which happens both times, is that Newton will hit the intermediate route along the sideline. Although the receiver is moving horizontally in his route, this is more of a “stick” throw for Newton. He is throwing to a spot along the sideline rather than focusing on leading the receiver into YAC.

The next Newton adaptation featured more vertical routes off play-action rather than New England’s patented crossing routes and more play-action drop-backs from the shotgun.

Instead of asking Newton to turn his back to the defense from under center, McDaniels incorporated more play-action from a shotgun formation to keep Cam’s eyes downfield.

According to Pro Football Focus’s stat guru Louie Benjamin, Newton’s passing grade was 84.3 when the Pats ran play-action from the gun last season. On 104 under center play-action drop-backs, Newton’s grade was 71.1.

In this play, the Pats call their “Charles Barkley” scheme where the backside guard pulls on the play fake to simulate a power run, which is a staple of their offense that Brady usually ran from under center. Newton’s more comfortable in the gun, though, and they pair the backside crosser from Byrd with a return route from Meyers to take the rotating safety out of the crosser window. Newton pumps to Meyers to clear out the window and drops a dime to Byrd on the crosser.

When the Patriots went under center to dial up play-action, McDaniels began to call more vertical routes rather than horizontal patterns to make Newton comfortable.

Here, the Patriots ran their lead-play action concept with the fullback in the backfield to get the Jets to bite on the fake. Newton has a backside in-breaker that he uses to move the deep safety away from his primary target, Jakobi Meyers, on the deep comeback route.

Continuing with a more vertical theme, McDaniels dialed up more corner routes off play-action, and Newton threw it well, with a 110.4 passer rating on those passes.

Again, notice the “nub” formation from the offense. A nub formation is when an in-line tight end is the furthest player out on one side of the formation, with the Pats stacking the left side. As Newton comes off the play fake, only two receivers, both to his left, release downfield. Meyers dusts Marcus Peters on a “burst” corner route, where he fakes a crosser and breaks out, and the Pats gain 26 yards (plus a penalty for unnecessary roughness).

At some point, the Patriots will turn their offense over to first-round pick Mac Jones. Whether Newton plays well or not, Jones was the 15th overall pick and will get his chance.

Although Jones was thrown into the fire in minicamp and handled the heavy workload well, Newton is still the favorite to open the season as the starter.

New England’s additions of Hunter Henry, Jonnu Smith, Nelson Agholor, and Kendrick Bourne will help whoever is under center more than their “weapons” have the last two seasons.

Plus, things will likely look different as McDaniels highlights the strengths of the new additions.

Still, if Cam Newton starts in the upcoming season, he will not be an effective passer if McDaniels leans on the old Brady elements in New England’s playbook.

Nobody is suggesting that Newton will light the world on fire as a passer if McDaniels leans heavily on these adaptations. Instead, the objective was to give a glimpse into what a viable passing offense with Newton as the starter looks like because the goal is to win football games.

More experience in the system should make Newton more comfortable with some of those Brady-like concepts, but that’s never how he has succeeded as a passer in the NFL.

If Newton starts games this season, the Pats’ coaching staff will need to lean on a potent rushing attack and a passing system that resembles the aforementioned four-game stretch last season.