Lazar: In ‘Uncharacteristically Aggressive’ Offseason, Julio Jones is the Missing Piece for Pats 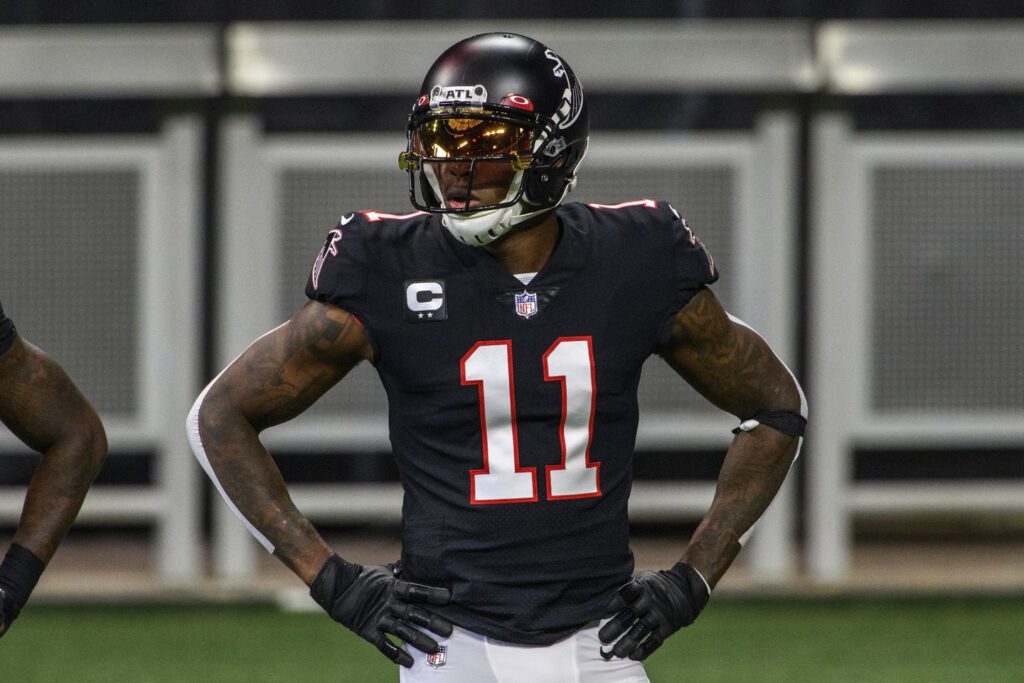 Falcons star Julio Jones has requested a trade, and it’s difficult to find a reason for the Patriots to pass on the disgruntled wide receiver.

The main reason Jones is available is a $23.05 million cap hit that the cap-strapped Falcons are struggling to afford this season. According to Over the Cap, Atlanta currently has $410,000 in cap space, which isn’t even enough to sign their entire 2021 draft class.

If the Falcons trade Jones after June 1, they’ll save $15 million in cap space, while the team acquiring him in the deal will carry a $15.3 million cap charge for Jones this upcoming season.

The Pats are one of 11 teams that could acquire Jones without needing to clear cap space first, which along with his age (32) and recent injuries (hamstring), will shorten the list of suitors.

Despite a large cap hit, there are only two explanations as to why the Patriots wouldn’t consider trading for Jones, and neither make much logical sense when you get into the details.

First, New England’s four free-agent pass-catcher additions are counting for nearly 11% of their salary cap this season, and trading for Jones would change the equation of their offense.

In other words, the Pats already spent significant cap space on Hunter Henry, Jonnu Smith, Nelson Agholor, and Kendrick Bourne, so adding Jones would ensure that one of those prior acquisitions would have a lesser role in the offense than previously planned.

If your reasoning for passing on Jones is “what about Nelson Agholor?” then that holds up in a debate about drafting day two wide receivers or a middling veteran that might be available.

However, Jones is neither an unproven college prospect nor an average veteran wideout; he’s a game-changing weapon.

And if the goal is to set up Cam Newton or Mac Jones for success, Jones brings an outside presence that this offense is currently missing.

Henry and Smith will do their things in the middle of the field, Agholor fits in nicely as a “Z” receiver that plays both inside and outside, and Jones would give them a true “X” receiver.

Although he missed half the season due to injury, Jones’s tape and production show an elite receiver that defeats man coverage with ease and demands extra attention on the outside. So if your argument against the trade is he’s old or washed, then you are sorely mistaken.

Last season, Jones’s 2.60 yards per route run ranked fourth among wide receivers while he still caught nearly 69% of his targets against man coverage despite the hamstring issue.

Patriots quarterback Cam Newton’s expected points added per attempt against man coverage was the worst in the NFL in 2020, so finding receivers who can beat man coverage is a priority.

Even at this stage of his career, the 32-year-old still brings an elite blend of size, speed, and route-running technique to the table, making him a challenging cover for all cornerbacks.

By isolating him on the outside, Jones creates big plays better than any receiver in the NFL, with a league-high 35% of his grabs going for 15-plus yards.

Here, Jones is aligned on the backside formation as the “X” receiver. He doesn’t waste time getting into his route off the line of scrimmage and contorts his body as he blows by the defender to avoid a jam. From there, Jones re-stems vertically to set up his break and comes downhill into the dig route while staying level coming across the field to prevent the corner from getting back into the catch point.

On this dig route, Jones is going to use a one-step stretch release to defeat press coverage. He uses a crossover and arm over to get around the jam, then pushes vertically and snaps the route off, beating his man easily to present an easy completion for the quarterback.

Now that we’ve seen Jones win on horizontal breaks, he uses a wide variety of ways to win on the outside to set up downfield vertical routes.

In this play, Vikings corner Cam Dantzler uses a soft press technique against Jones. Jones takes the space off the line to widen his release and create a bigger passing window for his QB along the sideline. Then, Matt Ryan throws a back-shoulder fade with Dantzler protecting over the top, and Jones makes the adjustment and high-points the ball.

Although Jones is excellent at defeating press-man coverage, he’s at his best when facing off-coverage on the outside due to his burst off the line and ability to change directions.

Jones’s 90.9 receiving grade against zone coverage led all wide receivers in 2020, per PFF, and many of the techniques used in today’s game still allow Jones to run isolation routes on the outside versus zone.

The Falcons stars’ patented route is a “blaze out,” where he sells an inside break at the top of his stem with his eyes and hips, then cuts back outside. Above, Jones eats up the cushion between himself and the defender, sells the inside fake, and dusts the corner in three efficient steps as he breaks out.

Jones can also charge hard off the line of scrimmage if the defender plays off-coverage, forcing cornerbacks to respect a vertical route.

Here, Panthers corner Donte Jackson opens his hips upfield to stay over the top of Jones’s vertical stem, and then Jones decelerates on a dime.

The Patriots made upgrades to their supporting cast this offseason for whichever quarterback is under center this season, but it’s unclear if they have enough of an outside presence.

As currently constituted, New England doesn’t have an outside receiver that can consistently beat the opponents’ #1 corner and force defenses to game plan for them each week.

I don’t have the cool graphic but who is stopping this #Patriots offense:

Instead of forcing Agholor or Henry into the “X” receiver role, the Patriots could roll out the 12-personnel package above that would surely keep opposing defensive coordinators up at night.

Do the Patriots need Julio Jones? No, they can score points running their passing game through their two tight ends and pounding the rock behind a great offensive line as initially planned.

But in an uncharacteristically aggressive offseason, an outside receiver of Jones’s caliber is the missing piece for the Patriots’ offense.

If Bill Belichick is truly going for it this season, which appears to be the case after his free-agent spending spree, then go get Julio.