Lazar: in Win Over Ravens, Patriots Had Peak Performances on Both Sides of the Ball 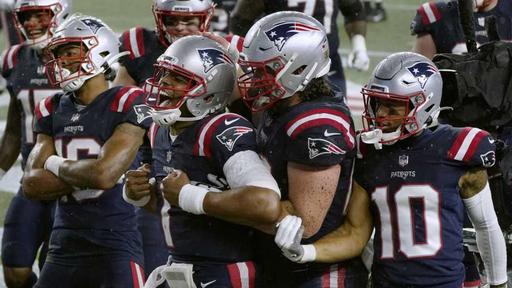 Belichick’s motto to his team over the years is that “real football starts after Thanksgiving,” which is when New England typically begins to gear up for another postseason run.

Although the Patriots (4-5) are tenth in the AFC out of seven playoff spots with a ten percent chance to make the postseason, they might be peaking at the right time once again.

New England still has an uphill battle, but their victory over the Ravens was the first time in months that they looked like a playoff-caliber team.

The Pats offense put together four consecutive scoring drives, including three touchdowns, taking a 23-10 lead in the third quarter over the defending AFC regular-season champs.

We saw a peak offensive performance on Sunday night that featured a high-end ground game and timely downfield passing against the top-ranked defense in football by some metrics.

Similarly, Belichick’s defense had its best early-down execution in over a month, sparking a shutdown of reigning MVP Lamar Jackson and the struggling Ravens offense.

On both offense and defense, Belichick and McDaniels are settling into personnel groupings and schemes that use the players available to them the best way possible.

The Patriots won on the line of scrimmage thanks to a great offensive line that currently leads the league in run-blocking grade and is ninth in pass-blocking efficiency, per Pro Football Focus.

Plus, quarterback Cam Newton’s struggles after contracting the coronavirus are over, with the former MVP ranking fourth in completion percentage over expected in his last three starts.

Ultimately, it might be too little too late for New England, who needs to leapfrog three 6-3 football teams to make the playoffs. But the foundation is there for a second-half push.

Newton led a ten-play, 75-yard scoring drive that, followed by a JC Jackson interception, gave the Patriots a 13-10 lead heading into the half.

New England then opened the second half with their fastest scoring drive of the year, going 75 yards on four plays with gains of 16 yards, 25 yards, and 26 yards before Cam waltzed in for six.

The drive starter was a 16-yard run on a trap or counter handoff to running back Damien Harris, who is skyrocketing up the leaderboard in yards after contact and rushing yards over expected.

After a successful first run, the Pats went back to Harris. This time, they’re blocking fullback lead or ISO, and Harris sets up a 25-yard play with excellent running between the tackles.

With the Ravens run defense searching for answers, McDaniels then dialed up play-action. The Patriots are using play-action on 39.2 percent of Newton’s drop-backs, most in the NFL.

Following a penalty to Peters for a late hit, the Pats washed out three Ravens defenders with two “crack” blocks by Byrd and Harry and Cam jogs in for a touchdown.

Scoring on a 75-yard TD drive in just four plays was unimaginable at times for the Patriots this season, but the effect of their running game’s potency is giving them a formula.

Despite running the ball the fourth-most against eight or more defenders in the box, the Pats are still producing a positive EPA per play on 50 percent of those attempts (fourth-best in the NFL).

Defenses can load the box against New England all they want, but they’re gaining yards anyway, and the emergence of Meyers is making teams pay for loading up against the run.

Since Week 8, Newton is averaging nine yards per attempt and 0.421 EPA per play against single-high or zero coverages, a significant improvement from the first seven games of the year.

With McDaniels sprinkling in passes to the running backs and the occasional trick play, the Pats offense suddenly looks like a legitimate operation even against strong defenses.

Now that the offense is finding itself, it’s a game of complementary football, with the defense finding things that worked against Baltimore after struggling this season as well.

Last week, we documented the Patriots’ struggles on first and second down defensively, which was the main contributor to New England ranking 31st in DVOA through the first nine weeks.

Their early-down defense’s biggest weakness was that the Pats couldn’t stop perimeter runs, specifically outside zone, allowing a league-high 5.7 yards per rush.

Due to better scheme and execution, the Patriots, led by second-year linebacker Chase Winovich and rookie safety Kyle Dugger, set the edge better than they have all year.

The Ravens only averaged 4.1 yards per rush on their 18 outside rush attempts, which is well below their season average of 5.8 and the Pats’ league-worst average entering Week 10.

To combat the Ravens’ outside rushing attack, Belichick played with defensive backs as wide edges, and on the tight end side of the formation, they had a typical edge defender.

On the second play of Baltimore’s opening drive, we saw Belichick’s plan centered around specific roles for Dugger and Winovich take shape. The Ravens ran outside zone weak, away from the tight end, with a lead-blocker out of the backfield. Dugger steps up and blows up Ravens tight end Nick Boyle, forcing the runner back inside, where newcomer Carl Davis shows great lateral speed to run down the line and make the stop.

#GoPats Rookie SAF Kyle Dugger is positioned to be the cutback/boot player responsible for Lamar Jackson, yet he’s explosiveness enough to close on the RB running Outside Zone away and lay the wood. pic.twitter.com/jwwYAis449

Although Dugger had a big hand in it, the defensive star of the game was Winovich, who tallied a career-high nine quarterback pressures, set the edge, and played 13 snaps off the line.

Here, the Ravens ran outside zone with a fullback and tight end towards Winovich. Wino gets upfield to set the edge against fullback Patrick Ricard, slowing down and forcing the runner to cut inside of Ricard, and the backside pursuit gets there to limit Baltimore to a small gain.

Here’s another sign of improvement. In the loss to the 49ers, Winovich allowed Deebo Samuel to slide across the formation unimpeded into a motion screen, allowing a big gain.

Baltimore tried to leak the running back out the backside of the formation, but Winovich blew him up in the backfield, not allowing Dobbins to get into his route. With Dobbins out of the play, Lamar has to attempt a pass into a tight window that falls incomplete.

Winovich then expanded his early-down role by playing at inside linebacker for the first time in his career. In fact, it was his first time playing off the line since High School, according to him.

In this play, Winovich is playing a JACK linebacker role next to the MIKE. Baltimore runs outside zone once again, with John Simon and Jonathan Jones setting firm edges and Lawrence Guy holding up inside to prevent a cutback, allowing Winovich to flow without disruption to the ball.

With the Patriots holding Baltimore to -0.22 EPA per rush on early-downs, it got the Ravens into a more pass-heavy script and held them to 6-of-13 on third down.

The Ravens are typically a run-heavy operation, but they threw the ball 33 times compared to just 17 rush attempts on first and second down because the Pats shut down their running game.

Baltimore was effective with their early-down passes, but they did invite New England to put pass-rushing personnel on the field, which is where Winovich and rookie Josh Uche shine as edge rushers.

New England had a four-man front of Winovich and Uche as edge rushers, with Adam Butler and Deatrich Wise as inside rushers, easily their most talented pass-rushing group. With Baltimore in a five-man protection, Butler draws two blockers to create one-on-one’s for his teammates, and all three of them win on the rep. Uche uses an inside hesitation step to get right tackle D.J. Fluker leaning inside, then finishes with a swipe-rip move to turn the corner. Winovich comes with straight speed on the left tackle, Wise goes with a snatch move on the left guard, and the trio has a party at the quarterback.

Before the Ravens, the Patriots’ three opponents (Jets, Bills, 49ers) shredded New England’s early-down defense to the tune of 0.313 EPA per play, using outside zone runs as a foundation.

Belichick found a way to stop outside zone on Sunday night, and Baltimore’s 0.09 EPA per play on first and second down was a dramatic improvement for the Patriots defense.

Using their formula against the Ravens, the Pats found a way to play good team defense while executing within their limitations at a high level offensively, which could make them dangerous down the stretch.

If the rest of the league thought they were done with Belichick, don’t look now.