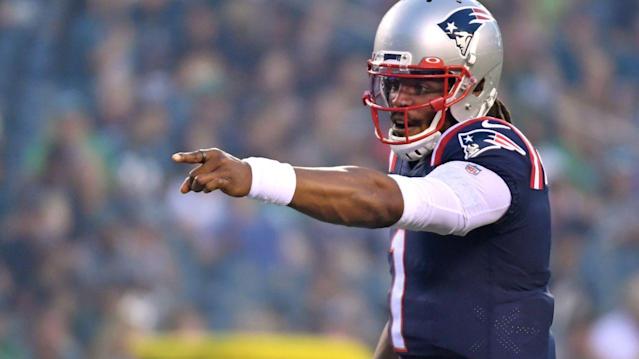 CLNS Media Headquarters — The Patriots wrapped up their week in Philadelphia by dismantling the Eagles 35-0 in Thursday night’s second preseason game.

Although most of the Eagles’ starters didn’t play, the Patriots played their starting offense and defense for three drives each Thursday night.

The numbers look good for Newton, as did the process, working in rhythm, throwing with good zip on the ball, and navigating the pocket while keeping his eyes downfield.

Here, Newton reads the safety rotating from a deep position in the top left of the screen into a hook zone underneath. Jakobi Meyers’s inside vertical takes the post safety deep, and when Cam sees that left safety rotate down, he comes back to Kendrick Bourne’s dig route for 23 yards.

We have seen the Newton above in practice more often this summer, and if he continues to play with a clean process against starter-level competition, he’ll make it difficult to turn to rookie quarterback Mac Jones.

Speaking of the Pats’ first-round pick, Jones entered the game with 11:14 remaining in the second quarter and was 13-of-19 for 146 yards in four drives, three of those ended in the end zone (more on Jones later).

Here are more instant takeaways from the Patriots blowout win over the Eagles:

As was the case with Newton, it’s important to note that Philadelphia’s reserves were in the game for Jones’s drives and looked overmatched by the second-team Pats offense.

On the play, an inside vertical route clears out the dig window for Harry past the sticks. Jones gives a subtle shoulder fake to draw the outside defender away from Harry and then throws a bullet a touch behind Harry to protect the Pats wideout from the inside defender. Jones’s ball placement and fake in the pocket make that play work.

The Patriots’ first-round pick opened the second half with a nine-play, 75-yard touchdown drive where Jones was calling all his own plays in a no-huddle attack.

Jones had completions of 17 and 21 yards to wide receiver Gunner Olszewski to move the offense down the field. The first of two completions to Olszewski was a pretty QB play.

On the throw, the Pats ran a levels concept to Jones’s right where wide receiver Devin Ross runs a shallow dig route with Olszewski’s deep dig behind it. Jones stares down the left side to hold the coverage, and when Ross’s route clears out the window, the Mac rips it to Olszewski.

There are many reasons to like what we’ve seen out of Jones from the accuracy, decision making, and quick processing.

But the pace of the offense when he’s under center is arguably Jones’s most impressive attribute, especially as a rookie in his first NFL training camp and preseason.

2. RB Sony Michel Makes an Impact in the Passing Game

On the 17-play drive, RB Sony Michel had three catches for 38 yards, including an impressive 19-yard catch-and-run on a pass from Jones.

Jones sees the slot cornerback travel with the slot receiver giving Michel a matchup on linebacker Alex Singleton. Jones puts the ball on Michel quickly so he can set up a run after the catch, and Sony shakes off Singleton and jukes around T.J. Edwards as well.

In his first three seasons, the 2018 first-round pick only has 26 career catches, but Michel has shown steady improvement as a receiver this summer, and that continued on Thursday night.

Despite only playing three series in the preseason, Judon is filling up the stat sheet and making Bill Belichick look very smart for signing the former Baltimore Raven in free agency.

Judon has a strip-sack, drawn hold, a quarterback hit, and a QB pressure on third down on Thursday over the last two weeks.

On the pressure, Judon runs a three-man stunt with Montravius Adams and second-year linebacker Josh Uche. Judon wraps around Adams and Uche’s instant-penetration to pressure quarterback Joe Flacco and force a throw short of the sticks.

Judon’s ability to set the edge of the defense against the run, rush the passer, and occasionally drop into coverage make him a perfect fit at outside linebacker in Belichick’s system.

The big-legged Nordin is pushing veteran kicker Nick Folk for the job in New England. However, the undrafted rookie missed a 36-yard field goal and two extra points on Thursday night. After Nordin missed two straight kicks in the first half, the Pats went for two following Jones’s first touchdown drive. Nordin has cannon for a leg with some of his kicks looking good from 60-plus yards, but accuracy and consistency were major question marks in college. The Patriots will need to decide if they have enough confidence in Nordin to choose him over the very steady Folk, who is dealing with an injury and didn’t dress on Thursday night.

New England’s first real test of the game on defense came early in the first quarter when the Eagles were facing a third-and-one from Philadelphia’s 31-yard line.

In on the stop was linebacker Kyle Van Noy, defensive tackle Carl Davis, and nose tackle Davon Godchaux. The play is made initially by Van Noy, who gets inside the tight end to the quarterback’s left and pushes his blocker into the backfield to stop the initial push. Then, Davis and Godchaux hold down the left side of the line as well.

After setting a Patriots preseason record with a 91-yard touchdown run in the opening week, fourth-round pick Rhamondre Stevenson was playing well again on Thursday.

New England has a history of redshirting rookie running backs, but Stevenson is trying to buck that trend with quick feet and smooth jump cuts for a 231-pound running back. Above, Stevenson impressively sequences together jump cuts in quick succession to pile on yards.

However, Stevenson’s fumble in the fourth quarter was a down-to-earth moment that could lead the rookie down the typical redshirt path.

The 5-foot-6 scat back averaged over seven yards per carry and made poor Eagles defensive back Michael Jacquet look silly on a nasty spin move.

Taylor also took a 21-yard run around the corner with an impressive bounce to the outside.

With Stevenson and Taylor adding to the veterans in the room, the Patriots have six running backs that are NFL talent. The question now is do they have a spot for all of them?

Two Patriots on the rise departed the game with injuries in the first half, with Uche’s injury an unknown, while Harry left with trainers favoring his shoulder after a diving catch attempt.

The play where Harry was injured was a microcosm of his NFL career. Harry ran a great go route to stem towards the defender to get into the corners’ leverage and then explode by Zech McPhearson. Harry doesn’t need to leave his feet here as the pass is perfect from Jones. He should run through the ball and into the end zone but instead makes a diving attempt and lands hard on his shoulder.

On the one hand, here’s hoping Harry makes a quick recovery, and he is having his best camp yet as a Patriot. However, those are the types of almost-had-it plays that Harry needs to make.