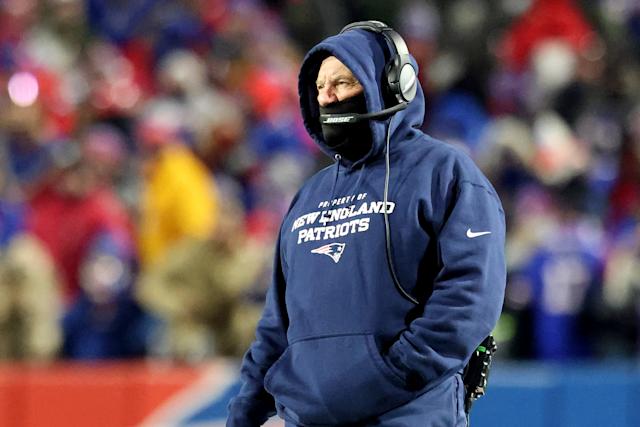 The common trope about Patriots head coach Bill Belichick is that Belichick zigs when the rest of the NFL is zagging.

While the rest of the league pays a premium in one area of the roster, Belichick reduces spending there and allocates his resources to the market efficiencies. It’s been that way for years.

Belichick’s latest left-hand turn was to build a throwback roster with a smash-mouth offense designed to run the ball and create explosive passes with play-action out of heavier personnel groupings (fullback, multiple tight ends).

As NFL defenses get lighter and faster to adapt to the spread revolution, Belichick is playing bully ball.

Defensively, it’s similar ideals but translated to the other side of the ball. The Pats are stockpiling two-gapping defensive linemen, thumping linebackers, and hybrid safeties who can play in the box out.

As NFL offenses play lighter personnel and spread the field, Belichick wants to punch you in the mouth.

However, after a no-show against the Bills on Wild Card weekend, where, in Belichick’s own words, the Patriots “couldn’t keep up with (Buffalo),” New England’s football architect finds himself at a crossroads.

Do the Patriots steer into the skid, and Tokyo drift their way through the rest of their rebuild or change their roster-building and schematic approach?

A full-scale philosophy change might seem dramatic after a ten-win season, but Belichick has done it before, especially on offense, and these are times in New England where dramatic changes are needed.

The Pats are still navigating the post-Brady era while staring at a Josh Allen-led monster in Orchard Park that isn’t going anywhere and lacked championship-caliber mettle against every playoff team they faced in 2021.

Watching Allen’s spread machine cut through the Patriots defense like a hot knife through butter while the Pats trotted out a six offensive linemen package made me feel like my 95-year-old great uncle calling me on his flip phone while I spoke to him on my iPhone 13.

To beat the best and take back the division from Allen and the Bills, the path for the Patriots may not be through.

BUILDING AROUND MAC JONES ON OFFENSE

Starting on offense, quarterback Mac Jones showed plenty of flashes in his rookie season to view his future optimistically.

As of now, the Pats don’t have a quarterback problem. But as Jones develops, they need to cater the offense more to his strengths moving forward.

In an excellent breakdown by The Ringer’s Steven Ruiz, Ruiz put the playoff teams into three buckets based on their offensive systems.

The offensive schemes were: the spread (KC/Buffalo), wide zone teams (Shanahan/McVay tree), and the throwbacks (Pats/Bucs/Titans).

Ruiz highlights downhill power rushing schemes, play-action vertical shots, and in-breaking routes as hallmarks of the “throwback” systems while also speaking to its multiplicity and complexity.

“Another common feature is the level of responsibility this scheme puts on the quarterback,” Ruiz writes. “Whereas the spread and wide zone schemes create wider throwing windows by stretching the field horizontally, these more vertically attacking offenses require difficult throws into tighter windows.”

With the load the system puts mentally on its quarterback and receivers and the necessity to keep up with pass-first offenses with a high-volume rushing attack that doesn’t feature a running QB, does that sound like an offense that will optimize Jones’s abilities?

Asking a quarterback who doesn’t have high-end arm talent to consistently drive the ball into tighter passing windows and take vertical shots?

But we are talking about searching for golden gooses at the skill positions to make an inherently challenging system easier on Mac, or for him to develop into an elite quarterback. He’ll never be Brady, but you get the point.

Instead, the Patriots should integrate more of Mac’s college system at Alabama by embracing spread concepts with quick shotgun passing and run-pass options (RPO) to produce yards after the catch, amplifying Jones’s accuracy and quick decision-making. Plus, running the ball out of lighter personnel and deep crossers to speedy skill players to generate explosives.

Although it’s not who they are foundationally now, McDaniels ran a spread system with the Patriots in the late 2000s, early 2010s, with peak seasons in 2007 and 2011 utilizing spread schemes.

They also need to take a hard look at the complexity of their passing system, which is bogging down the explosive players they do have and making it difficult to integrate new pass-catchers, especially from the college ranks.

With college football mostly shifting to spread schemes, receivers aren’t accustomed to option routes, and even pro personnel additions struggle with elements of the Patriots’ system.

For instance, Kendrick Bourne was by far their most dynamic receiver and finished fifth in YAC per reception this season. However, as recently as Week 18, Bourne was colliding with teammates because he ran an incorrect route (and that’s just an obvious example to an outside observer. There were way more to those that knew the play calls).

For Nelson Agholor and Jonnu Smith, the difficult transition into the Pats offense led to disappointing seasons for two key free-agent additions. And in Bourne’s case, they couldn’t feed him enough touches.

And if free-agent acquisitions with years of NFL experience had a tough time adapting, imagine how difficult it is for a rookie receiver to develop and play fast right away.

As we know, draft picks don’t have very long to prove their worth at this level, so a slow start to their careers means they’re quickly replaced.

But regardless of their schematic shifts, it is an absolute must to acquire playmakers who generate explosive plays as ball carriers and by attacking the football downfield and/or creating separation.

Get used to hearing the word “explosive” this offseason. They need more of it, everywhere. If New England wants to make it work with Jones, they need to find him a dynamic receiver who makes them a harder passing offense to defend. We are going on three-plus seasons with the same issues, and the lack of elite receiver talent started when Brady was here.

Right now, they’re a collection of complementary pieces that don’t make the quarterbacks’ job easier in a system that’s inherently difficult on the signal-caller.

ARE THE PATS OUTDATED ON DEFENSE?

The personnel issues that buried the Pats’ defense were at all three levels and fed into one another.

As a run defense, the Patriots’ system is built to have block-eaters such as Lawrence Guy and Davon Godchaux occupy offensive linemen and hold the point of attack.

Behind the defensive line are thumping linebackers who play physical football by coming downhill to take on blockers and ball carriers in the hole.

Outside of rookie Christian Barmore, New England doesn’t have explosive one-gap penetrators on the interior D-Line who make plays behind the line of scrimmage against the run or pass.

Those plays are supposed to come from edge defenders (Judon, Van Noy), off-ball linebackers Dont’a Hightower and Ja’Whaun Bentley, and hybrid safeties at the second level.

But here’s the catch: the Patriots’ secondary couldn’t hold up enough in man coverage, so those front-seven playmakers were often pulled into disadvantageous coverage situations.

For example, Judon, Hightower, and Bentley saw their snaps in coverage dramatically increase as the season wore on because the Pats had to drop seven-plus defenders in zone coverage to have a chance in the passing game.

Mostly, their man coverage calls came on third down, and even then, they needed multiple “robbers” or deep safeties to hold the fort, taking defenders out of the rush (fewer blitzes).

The results were fewer plays from the second level with 260-pound linebackers tasked with zone drops that prevented them from coming downhill or found them in losing situations as coverage players.

In the running game, defensive linemen who don’t penetrate and aren’t supposed to be your playmakers were all alone stopping the run while the linebackers were trying to take shortcuts to their zone drops.

Then, New England’s bruising linebackers were exposed in space and couldn’t cover effectively as zone defenders.

So here’s the decision for Belichick: either continue to deploy the big backers and two-gap IDLs by bringing it back to 2018-19, where your cornerback group was dominant in man coverage with Stephon Gilmore, J.C. Jackson, Jon Jones, and Jason McCourty allowing the linebackers to fly upfield vs. the run and be more aggressive in the pass rush.

Or modernize your defense, get smaller and faster at the second level, and become the Buffalo Bills: a one-gap system with linebackers flying around the field and excelling in zone coverage.

Belichick is a man coverage pioneer. His system doesn’t work when his linebackers have important coverage assignments, preventing them from stopping the run and rushing the quarterback while subjecting Hightower and Bentley to chasing 11-personnel in coverage.

However, similar to the trickle-up issues the Patriots have at receiver from college football, it’s fair to wonder if there’s enough of a pipeline for Belichick’s system to add youthful front seven talent.

The college game is driving the transition at the pro level to undersized linebackers and one-gap defensive lines because the spread is taking over; Belichick’s buddy Nick Saban will tell him that he’s not winning national titles if he can’t match speed on speed (or keep up offensively).

We don’t need to look any further than the Pats’ issues integrating more explosive players like Josh Uche and Chase Winovich into their system.

As recent day-two picks, Winovich was a healthy scratch, and Uche played just six defensive snaps against Buffalo. Although both players move at a different speed than the rest of New England’s linebackers, they don’t fit the set the edge, take on and contain mold.

New England wants to be the hammer to the NFL’s nail. But with Hightower and Bentley as free agents and the former likely contemplating retirement, now is a great time to make a philosophical shift at the linebacker position.

Suppose Belichick doesn’t want to undergo a system overhaul. In that case, the Patriots need to pay J.C. Jackson and commit another major resource to pair Jackson with an elite man-coverage talent.

Starting slot corner Jon Jones is expected to fully recover from shoulder surgery and is under contract next season, as is newcomer Jalen Mills.

Mills was solid in his first season with the Patriots at outside corner and can wear more hats in the backend once the Pats have the depth to move him around the secondary.

The Patriots have a path to return to Super Bowl-caliber, and the 2021 season was a good first step.

They found a quarterback with a bright future, also hit on Barmore and running back Rhamondre Stevenson in the draft, and some of their veteran additions worked out (Judon, Henry, Bourne, Mills).

But New England’s roster had fatal flaws that point to shifts in today’s game and not enough elite talent compared to other contenders.

Almost every time the Pats played a formidable foe, they were out-gunned offensively and were the slower football team.

If the Patriots want to return to the top, they need to plug in dynamic talents into a few key areas that make their systems go.