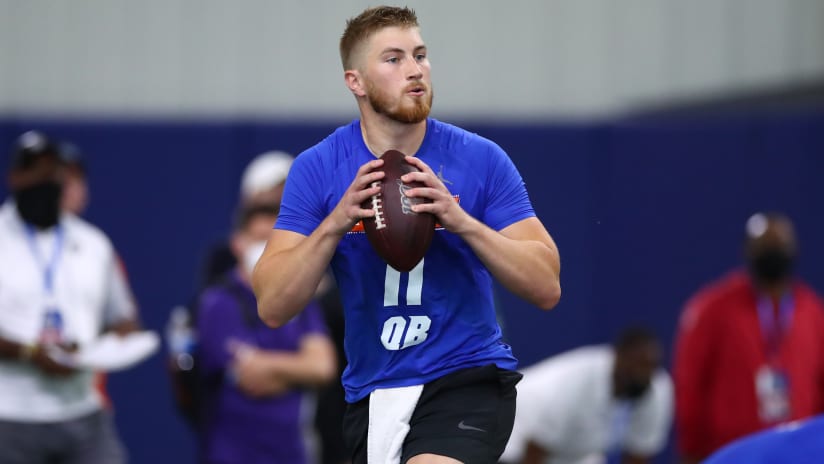 Belichick’s presence on Nick Saban’s campus is a yearly occurrence, but McDaniels attending was very notable given the slew of outstanding prospects on offense in Alabama’s 2021 class.

McDaniels took in former Alabama quarterback Mac Jones’s throwing session, who we’ve discussed as a potential Patriots target in the first round. But also could’ve been there to scout running back Najee Harris, wide receiver Devonta Smith, or a host of other intriguing prospects.

Following his trip to view the Crimson Tide’s talent, McDaniels headed south to take in the Pro Day at the University of Florida, where more of the draft’s top offensive prospects worked out on Wednesday.

Although Kyle Pitts and Kadarious Toney are potential first-round targets, Florida quarterback Kyle Trask was the player with the most to prove.

Trask finished fourth in Heisman voting for the 2020 season after throwing for over 4,200 yards and 40 touchdown passes. According to SportSource Analytics, Trask was 11th in the country in expected points added per drop-back (0.327) and completion percentage over expectation (+10.6). In all, he was solid as a two-year starter for Florida and very good as a senior.

After going toe-to-toe with Alabama in the SEC Championship Game, Trasks’s top weapons sat out the Cotton Bowl, and he threw three interceptions in by far his worst game of the season.

Unlike others in this draft, Trask wasn’t a top High School recruit or a supreme athlete, the latter of which, in particular, has marred his draft stock along with the bowl game performance.

During his Pro Day, Trask’s relative athletic score of 4.99 out of ten was subpar by today’s standards, especially his 40-yard dash (5.10 seconds) and agility testing; Trask, who has ideal size at 6-foot-5, 236 pounds, has an athletic profile that is going out of style.

Still, Trask deserves credit for beating out highly touted recruits for the starting job at Florida, and there’s a reason Pitts, Toney, and Florida’s offense was productive with him under center.

Since Pats OC Josh McDaniels viewed Trask live this week, let’s get into some of his tape from the 2020 season to demonstrate both his strengths and weaknesses as a prospect.

On the positive end of the spectrum, Trask is a well-built pocket passer that showed a willingness to stand and maneuver the pocket while under duress to deliver a catchable ball.

Most of Trask’s best moments come when he’s buying time for himself in a muddied pocket with either his size allowing him to shrug off defenders or quick movements to throw downfield.

Trask was particularly proficient at dropping the ball in the bucket downfield. In the play above, Florida mimics a run by pulling the left guard, which gets the Georgia linebackers to bite on the play-action fake. The running back sneaks out of the backside of the formation on a wheel route and separates over the top. Trask takes a massive hit as he’s throwing the ball downfield when his left tackle gets beat by top edge prospect Azeez Ojulari. Ojulari gives Trask his best, but Trask is unphased and still drops a dime downfield for a big play.

Here’s a second example of Trask avoiding pressure in the pocket and placing the ball perfectly downfield for his running back. Again, Florida beats the Georgia defense with a running back wheel route. This time, Trask steps around the edge pressure and throws the running back open to his back shoulder with the defender coming from inside the formation.

Another area where Trask’s size helps him is by shrugging off pass rushers in the pocket. Above, there’s a protection breakdown to the quarterback’s right that leaves an unblocked rusher over the right tackle. Trask protects the football and lets the defender fall off of him, then gets the ball in the open receivers’ hands for a walk-in touchdown.

Over 90% of Trask’s pass attempts came from the pocket, which speaks to his limited mobility and ability to orchestrate the offense as almost exclusively a pocket passer.

Along with solid play while under pressure, Trask also threw accurately downfield when kept clean once again with touch and ball placement, putting receivers in advantageous positions.

Although those are traits you feel you can build around, there are glaring weaknesses to Trask’s game that many scouts in the league consider potentially fatal flaws to his starter potential.

The biggest one of those weaknesses is a lack of mobility and athleticism, which we already covered, as it will significantly limit Trask’s ability to operate on second-reaction plays.

In other words, will Trask be able to survive in the NFL when the initial play structure breaks down? He can buy time in the pocket, but he still needs the rest of the play to run smoothly.

Other major critiques of Trask’s game are decision making and arm strength to drive the football downfield; the former Gator throws a decent deep ball, but throwing with zip into tighter windows is an issue. Plus, his turnover-worthy play rate ranks 13th out of this class (2.6%).

There were too many head-scratching decisions in the five games I studied of Trask’s last season. Here, the defense shows two-deep safeties before the snap, and Trask works to confirm its two-high after the snap. Despite knowing its middle of the field open and the field safety is working over the top of the post, Trask throws an INTable pass to the post anyways, passing up the open dig route by number three inside. That should’ve been a first-down completion. Instead, it’s almost picked.

Another alarming statistic for Trask is that nearly 28% of his incompletions resulted from a pass defensed, per SportSource charting, which was over ten percent the national average.

There are probably other factors involved, but that stat speaks to Trask’s issues driving the football downfield into tighter windows, making it easier for defenders to break up throws.

Some of those issues came from a slow process and limited arm strength to get the ball out to the sideline. Above, Trask is attempting a simple outside throw at the sticks, but he takes forever to get the ball out, and there isn’t enough zip on the pass to beat the defender.

There are also examples of Trask being indecisive and taking multiple hitches in the pocket before delivering a pass, which gives the defense time to close on open receivers.

Lastly, one more micro-issue with Trask as a Patriots fit discussed with Justin Fields is that 94% of his drop-backs came from the shotgun last season. Like Fields, Trask doesn’t have much experience operating from under-center or under-center play-action, which means that’s a skill he will need to learn when he arrives in Foxboro.

Fields doesn’t have nearly as many macro-issues as Trask, which is why you’re willing to coach him up in that regard. But it’s another element of Trask’s evaluation that makes him more of a developmental backup option.

Trask’s statistical production, size, and work inside the pocket make him an intriguing Patriots fit on the surface. But I have serious doubts that he’ll be able to overcome his deficiencies.

If he can learn to make better decisions with the football and cut down on turnover-worthy plays, maybe he can be managed if you surround him with Pitts and Toney-like playmakers, which is a lofty goal.

Trask’s lack of playmaking from out of structure and limited arm talent to fit the ball into NFL-sized passing windows will likely result in a borderline starter at the NFL level.

For the Patriots, that’s not a viable plan to “solidify” the position as owner Robert Kraft correctly identified as the team’s biggest need.