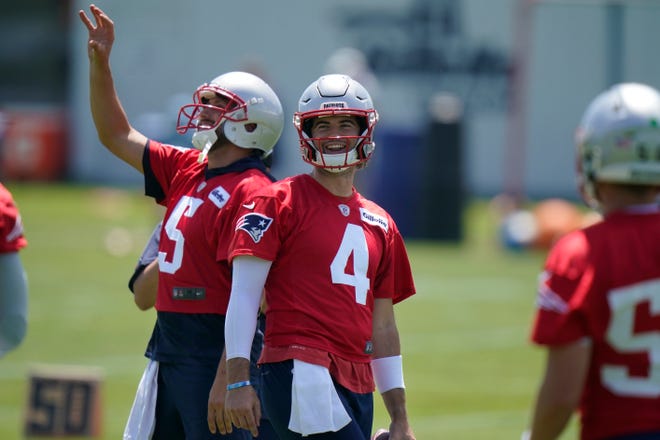 FOXBOROUGH — The Patriots held a nearly two-hour practice session as they continue organized team activities on the training camp fields behind Gillette Stadium on Friday.

As head coach Bill Belichick ramps things up slightly, there were an estimated 72 players in attendance, including some new arrivals, such as veteran linebacker Kyle Van Noy.

However, the biggest news out of practice was an injury to starting quarterback Cam Newton’s throwing hand. During a drill where coaches threw soft pads at QBs to simulate a pass rush, one of the faux pass-rushers struck Newton’s throwing hand on his follow-through, and the former MVP sat out the rest of Friday’s session.

Newton’s injury gave rookie Mac Jones and third-year quarterback Jarrett Stidham extra reps, with Stidham performing the best of any of the passers in team drills.

As is the case for all rookies, it appears that Jones is still getting used to the size of NFL passing windows and the speed in which they close compared to college football, which is nothing to worry about in June.

The Pats rookie had an interception dropped by Van Noy that was a miscommunication with tight end Hunter Henry and hasn’t made many true downfield throws during team drills yet.

Mac Jones dropping it in the bucket to J.J. Taylor on the corner route. More #Patriots coverage from OTAs on the way.

In the first half of practice, Jones had one-on-one time with offensive coordinator Josh McDaniels and offensive assistant Bo Hardegree. Jones worked on pocket movement and throwing to running backs out of the backfield while McDaniels coached him up.

Overall, Stidham had his moments, but the defense controlled the day, which is expected while the offense finds a rhythm in these early stages.

On a lighter note, there were quite a few coaches and even players at times donning Bruins hats on the practice field, showing their support for the B’s as they continue their quest for the cup.

Here are seven other observations from Friday’s practice session that featured both 7-on-7 and 11-on-11 drills, a noticeable uptick in intensity from last week’s first open OTA:

Nobody is looking too much into these OTA sessions, but the fact is that Stidham was by far the best quarterback on the field, going 13-of-14 in team drills with a Jakob Johnson drop as the lone incompletion. This week’s focus was on zone coverage, with the QBs facing all different types of zones in drills. Stidham’s two best throws came on dig routes against two-high structures. After a vertical route cleared out the middle, Stidham zipped completions to Jakobi Meyers and Isaiah Zuber. He also completed a pass along the sideline on a deep comeback route to Kendrick Bourne. All three throws qualified as “NFL-level” passes, and Stidham was fired up after the dart to Zuber. As the forgotten man in the quarterback room, Stidham at least put up a fight against Jones on Friday, earning the final two sets of reps in 11-on-11s over the rookie.

In the opening period of 11-on-11s, the Patriots’ defensive front had their way with the offensive line, which was without starting tackles Trent Brown and Isaiah Wynn. There are no pads and only very light contact, so it’s tougher for the O-Line to do its job, but the explosiveness off the line from Chase Winovich, Josh Uche, Deatrich Wise, and rookie Christian Barmore stood out. Uche, in particular, flew off the ball on several occasions and was unblockable at times. Although he’ll likely play off the line on early-downs, it’s easy to see a bright future for Uche as an edge rusher in passing situations. He’s an explosive mover with excellent bend to turn the corner. Barmore was disruptive as an interior presence as well. It was a good day all around for New England’s top pass-rushing unit.

3. S Kyle Dugger Doing a Little Bit of Everything

The Pats’ coaching staff is finding a variety of ways to deploy their second-year safety. Dugger is taking reps at several different alignments, both close to the line and in deep safety rotations, while also returning kickoffs in special teams periods. Dugger’s overall feel for the defense is improving rapidly, allowing him to play like a chess piece in the back seven for Bill Belichick. I’m excited to see Dugger’s improvements in year two. He’s a classic “make the leap” candidate who is showing all the early signs of doing just that.

Bourne made a few nice grabs late in practice, one on a deep comeback from Stidham where he created enough space with the timing of Stidham’s throw to haul in the pass and another leaping grab on a floater from Hoyer. Bourne won’t “wow” you with flashy speed or quickness, but he’s a steady option who is an intelligent route-runner and brings an infectious energy to practice.

Not that you would forget about Meyers, but as a reminder, he’s still second on the depth chart in my book behind Agholor right now. Meyers’s grab on the dig route from Stidham was a reminder of his abilities working between the numbers, and he remains squarely in the mix even with Agholor, Bourne, and Henry out there at these practices.

After he was absent from last week’s open practice, Van Noy was back in the fold on Friday on the edge of the Pats’ defense. He looked right at home rushing the passer and dropping into coverage, nearly intercepting Jones (he did push-ups after the dropped pick). Seeing the return of Van Noy alongside Winovich and Uche with Judon still to come puts into perspective how much better New England will be at edge defender this season.

Evaluating kickers is not easy, but after a quick summation of the process from special teams coordinator Cam Achord on Thursday, the Pats might have something with Nordin. Nordin’s leg speed and the “pop” sound the football makes when it makes contact with his foot translates to noticeable kick power. He has more than enough leg to kick in the league, and although he comes with accuracy concerns, he’s controlling the ball decently in these practices. We’ll see how he looks in August.