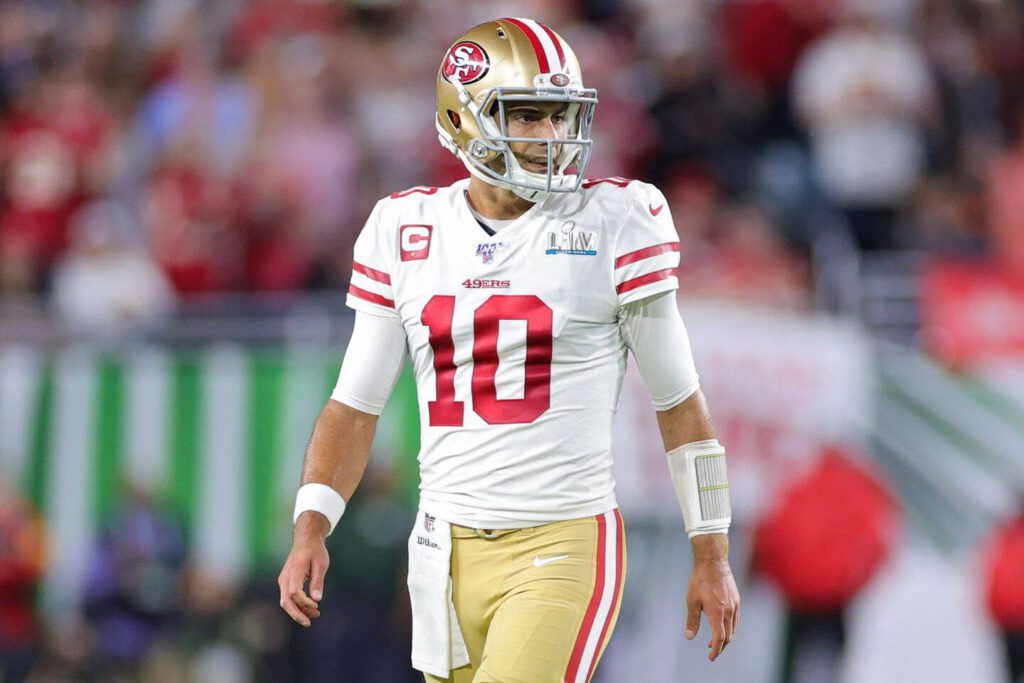 Jimmy Garoppolo’s career will be tied back to New England, Bill Belichick, and even Tom Brady, whether fans like it or not, with the conversation still swirling after the 49ers’ loss on Sunday.

The lack of return on the trade and sacrificing potential future success to hang onto Brady in his twilight years was the number one topic in Boston during the lead up to the Super Bowl.

But let’s talk some football and discuss Garoppolo’s on-field performance in Super Bowl LIV, which left an even more sour taste in the mouths of Jimmy G stans than expected after reviewing the coaches tape.

My conclusion: 49ers head coach Kyle Shanahan’s offense worked, but the quarterback let him down, while the Chiefs defense deserves credit for stepping up in big moments.

In the chess match between Shanahan and Chiefs DC Steve Spagnuolo, the entire game was summed up by an old coaching philosophy.

The image above from an Urban Meyer presentation when he was the coach at Ohio State, which has floated around football twitter, explains it well. Based on my charting, the KC defense played the vast majority of the game in a single-high safety shell, and they didn’t play a split-safety coverage until late in the third quarter on Garoppolo’s drop-backs.

With an extra defender in the box to even out the numbers, Kansas City was begging the 49ers to go away from their vaunted running game, and they obliged for the most part, but Shanahan protected Garoppolo with play-action.

The 49ers got off to a good start offensively, and through three quarters, Garoppolo’s numbers were fantastic sans a bad second-quarter interception (17-20, 183 yards, TD, 9.2 average).

However, 12 of those 20 pass attempts came with play-action, with Shanahan moving the pocket and giving him easy one-read throws.

Here’s an example of one of those simplified reads from the first half. The Niners mimic a run action by pulling the strongside guard and sending wideout Deebo Samuel in ghost motion. With all the backfield window dressing, the linebackers pull out of the passing lanes, and the play turns into a pass with only one receiver, Emmanuel Sanders. Sanders runs a “search” route where he’s reading out the coverage. Since it’s zone, he sits down and works back to the quarterback for a completion.

Despite terrific production off of play-action, Garoppolo was equally as bad when the Niners didn’t use play-action.

San Fran continued to shy away from their ground attack when they saw single-high coverages, and Garoppolo left plays on the field, especially without play-action.

Even though his numbers were good through three quarters, the tape suggests that his struggles started right out of the gate in the second half.

Garoppolo’s biggest weakness as a processor is reading coverage drops by linebackers. He doesn’t have a good feel for their body positioning or leverage and misses plays behind them.

Garoppolo checks out of a run into a passing play when he sees the single-high safety, and the Niners run a curl/dig combination with Sanders and tight end George Kittle. Garoppolo is reading the MIKE linebacker, no. 54 Damien Wilson, who opens to the sideline. With the other linebacker widening, it creates a passing lane behind the second level to get the ball to Kittle, giving the beastly tight end a runway to pick up yards after the catch as well.

Garoppolo takes the five-yard curl to Sanders instead, missing out on a potential big play.

Here’s another miss on a third-down play in the third quarter. The Chiefs show blitz then back off into coverage. Once again, Wilson opens to the outside in his drop, looking to provide help to the two-receiver side with the corners playing outside leverage.

As we roll the play, Wilson slips, but even without the slip, Kittle is open for a first down. Instead, Garoppolo takes the slant on the rub concept to his right, and the Chiefs tackle running back Tevin Coleman short of the sticks to force a field goal.

One final missed opportunity to his All-Pro tight end, this time, the Chiefs bust the coverage, and Garoppolo doesn’t see the bust which left Kittle uncovered. When Samuel goes in motion, two Chiefs defenders go with him, because Wilson gets caught thinking its zone when the rest of the defense is in man coverage, which is why Mathieu runs across with Deebo. The deep safety, Daniel Sorenson, is playing centerfield and is not responsible for Kittle. If Garoppolo correctly reads how the defense reacts to Samuel’s motion and feels Sorenson following his eyes, he has plenty of time to come back to the uncovered Kittle.

In the fourth quarter, Spagnuolo gave Garoppolo a few new wrinkles to overcome, mainly and man-pressure and Jimmy G wasn’t up to the task.

Here’s one of the infamous second-down plays in the final quarter that has everyone blaming Shanahan for throwing the football. As you’ll see, Garoppolo taps his helmet, checking out of a running play because the defense has the numbers advantage in the box. The Niners use play-action this time and the Chiefs bring a blitz. The linebacker gets a clean shot on Garoppolo, who has an open Deebo Samuel but sails the ball high due to the pressure. Garoppolo also had the back in the flat, who might’ve been his hot read against the blitz, but he only has time to see Samuel, and the ball flies over his head.

The other debatable pass play with time on their side came on the following series. Keep in mind, the Niners hit on a second and four play the drive before from the same field position, so they went to the air again on second and five to replicate that success.

San Francisco ran their “bluff” screen where the lead blockers on the perimeter act like it’s a screen and then release on slants upfield. The play works to perfection, they get Kittle on 37-year-old pass rusher Terrell Suggs, but All-Pro defensive tackle Chris Jones makes a great play to bat the ball down at the line. Jimmy does nothing wrong on that one, just a good defensive play.

On the next series with the Niners now trailing, Garoppolo had a terrific chance to put them ahead very late in the fourth quarter. The Chiefs are in cover-seven coverage with two brackets deployed on Sanders and Samuel, a Belichick-style scheme. With Sanders, the Chiefs use a “cone” bracket, and Shanahan anticipates the call with a beautiful route design. In a cone bracket, the inside defender is going to play low, and to the inside, so Sanders runs a post with a little fake to the outside to hold the outside defender. Sanders gets behind the defense, but Garoppolo sails the throw once again.

On Super Bowl Sunday, we saw a quarterback that lost his way more than once, and more than just in the fourth quarter, when the play design didn’t make it easy for him to make decisions.

Garoppolo’s Super Bowl performance did nothing to change my mind; he’s a system quarterback that’s limited in what he can do, and the play-calls by his coaches reflect that.

Luckily for the 49ers, they have a great scheme and a bright offensive mind in Shanahan.