Lazar: What Josh McDaniels Staying Means for the Patriots and Tom Brady 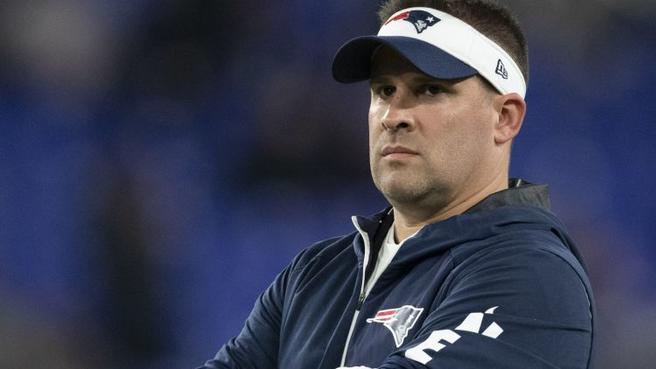 McDaniels traveled to Cleveland with his wife, Laura, on Friday to interview for the vacant head coaching position with the Browns, but they decided to go with their runner-up from a year ago in Stefanski.

The hiring of the Vikings OC signals that chief strategy officer Paul DePodesta, who had a long career as an executive in pro baseball as well, is getting his way with owner Jimmy Haslam.

Two notes on the Browns' search.

• 49ers DC Robert Saleh made a very real impression on the group. I'm told he made the call harder on the Cleveland brass.

McDaniels reportedly made a strong impression on the Browns in an interview that lasted over five hours, according to The MMQB’s Albert Breer, but wanted “sweeping organizational changes” to the football operations department.

McDaniels’s reluctance to work under the current regime in Cleveland is understandable, seeing that the Browns haven’t made the playoffs for a league-high 17 seasons in a row. Still, it cost him a chance at the last of five head coach openings this offseason.

The Pats OC also missed out on the Carolina Panthers job, but that was a bit more complicated.

McDaniels was expecting to host Panthers owner David Tepper for his interview last Tuesday when Carolina finalized a deal to make Baylor’s Matt Rhule their next head coach.

McDaniels’s agent, Trace Armstrong, also represents Rhule and didn’t inform McDaniels that the Panthers were going with Rhule as the Pats assistant waited on Tepper, as first reported by NFL Network’s Mike Giardi and confirmed by a source to CLNS Media.

Although an unprecedented move may bring a Brady-McDaniels pairing to another team isn’t impossible, the logical next step is for McDaniels to return to the Patriots next season.

The question now is how McDaniels’s return helps the Patriots in negotiations with Tom Brady?

As we’ve reported several times, the most likely scenario for Brady remains a return to New England for a 21st season, and ESPN’s Mike Reiss put it at 80 percent that Brady returns.

An underrated aspect of Brady departure scenarios is keeping the six-time Super Bowl champ in the only offense he has known for the last 20 seasons.

At this stage, it seems highly unlikely that Brady would want to learn an entirely new playbook and verbiage; if a team were to lure him out of New England, they’d have to run his Patriots offense.

The Denver Broncos had a similar situation with Peyton Manning back in 2012, and they decided to switch their entire scheme to Manning’s playbook with Indy, so it’s possible.

But nobody can offer Brady the comfortability of the same offense with the same coordinator and play-caller that has worked with Brady for the past eight seasons with great success.

Until this past season, where the offense and coaching staff underperformed, the Patriots’ average finish in Football Outsiders’ DVOA metric offensively was third since McDaniels returned in 2012.

With McDaniels back, it sets up a scenario where the Patriots can run it back next season and go for another Super Bowl, which isn’t out of the question with some upgrades on offense.

Some might see the status quo as a negative if they were ready to move on from McDaniels, Brady, or both because things got stale this past season, but this is the best path to make a Super Bowl run in 2020.

Special teams assistant Cam Achord will likely take over special teams. He already shared in many of Judge’s duties last season as Judge balanced working with the receivers.

Achord served under Judge for the last two seasons and is held in high regard by everyone in the organization. His sharp eye during film study often led to blocked punts during the season.

Belichick could give an official title to former Patriots wide receiver Troy Brown, who was around all season to assist Judge with the Pats wideouts, a position with youth, and huge turnover last season.

The Patriots could also bring back former wide receivers coach Chad O’Shea. O’Shea went with former defensive play-caller Brian Flores to Miami last season, but Flores is going a different direction on offense for the 2020 season, parting ways with O’Shea.

The Pats’ red zone offense took a hit after losing their red zone coordinator, O’Shea, to Flores and the Dolphins, going from scoring a touchdown 59.7 percent of the time (15th) to 50 percent in 2019 (26th). Being short one Gronk had a little something to do with that, too.

Belichick could also go outside the organization to bring some fresh ideas and a new perspective on coaching wide receivers and scheming offense, which might not be a bad idea.

The Patriots need to develop and integrate new receivers better than they did last season, and with younger receivers, the last two decades sans a few outliers like Edelman or Branch.

We’ll see how Belichick fills out his 2020 coaching staff, but Sunday morning’s news involving the Browns and Stefanski close the door on a departure for McDaniels, for now.