Lazar: There Are Lots of Jimmy Garoppolo’s Out There, No Need to Lament Trade 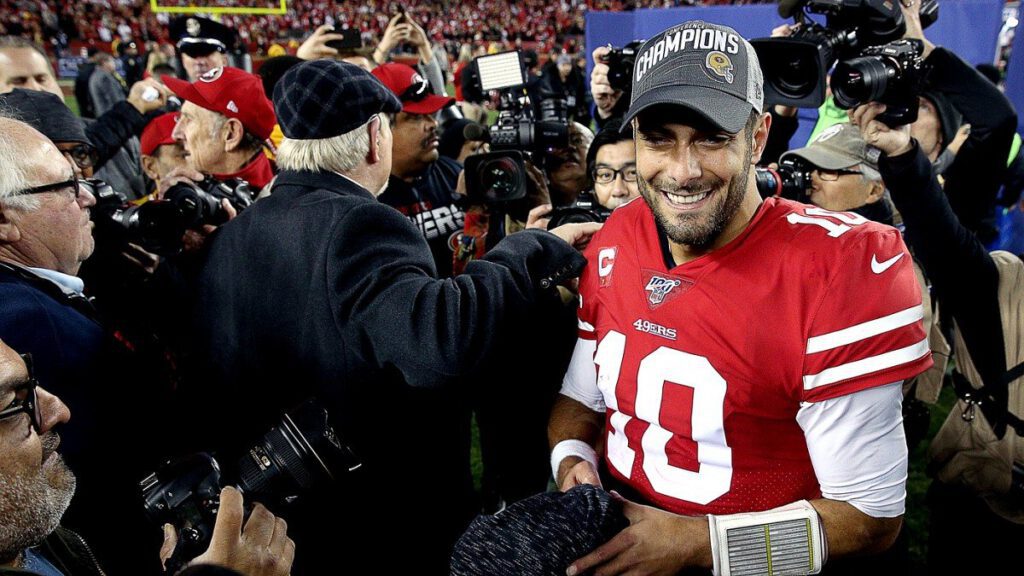 The problem with lamenting Bill Belichick’s decision to trade Jimmy Garoppolo in October of 2017 to San Francisco is that it ignores the former Patriots draft picks’ on-field performance.

We see the great record as a starter, 23-5, and a trip to Super Bowl LIV on the horizon, but he’s not playing the game at an elite level, and his coaching staff is telling you that they’d rather lean on a ridiculously good running game than Garoppolo’s arm.

The 2014 second-round pick is piloting an offense to the Super Bowl that arguably asks the least out of the quarterback position than any other unit in the NFL, and that was even truer in San Francisco’s two playoff wins to reach the Super Bowl.

During the regular season, Garoppolo’s expected completion percentage was the third-highest among 39 qualified quarterbacks (67.5), and his average depth of target was the third-lowest (6.5), according to Next Gen Stats.

The 49ers quarterback also ranked 26th in Pro Football Focus’s “big-time throw” statistic, which tracks when a QB drops a dime into tight coverage with only 14 of those the entire season.

Garoppolo ranked slightly above average at 13th in completion percentage above expected (CPOE) as well as Pro Football Focus grade, just behind Tom Brady, who was 12th.

Niners head coach Kyle Shanahan is a master schemer, and as he should, doesn’t ask much of a young quarterback who doesn’t throw the ball deep, aggressively into tight windows, or very often at all compared to the rest of the league.

Only the Baltimore Ravens and soon-to-be MVP Lamar Jackson ran the ball more frequently than San Francisco, and the Niners are on a historically high running pace in the postseason.

In their two playoff wins, the 49ers ran the ball 74.8 percent of the time with Garoppolo only attempting eight passes in the win over the Packers in Sunday’s NFC Championship Game.

Since the merger in 1970, only the 1973 Super Bowl champion Miami Dolphins ran the ball at a higher clip than the 49ers are in their current postseason run to the Super Bowl in Miami.

All that the 2019 season proves about Jimmy Garoppolo is that with a fantastic defense and running game, he’s a capable starter that has a damn good “QB wins” record and a long way to go before he’s making the Pats regret the decision to stick with Tom Brady.

He’s a good quarterback, but he isn’t elevating the scheme or doing things that can’t be coached like Brady, Rodgers, Wilson, Jackson, or Mahomes based on his 28 starts.

And if you want to make the case that the Patriots could’ve gotten more in the trade than a second-round pick, which Belichick has flipped into multiple picks since, then maybe that’s true.

However, we must also revisit the context of the trade. The Niners were betting on Garoppolo based on two starts, only had half a season of team control, and then had to give him $74 million guaranteed the following offseason to lock him up long-term.

Patriots fans and take artists might have FOMO over the 49ers playing in the Super Bowl, where the Pats were the last two seasons since the trade, winning a sixth Lombardi Trophy.

But turn on the tape and study the product that Garoppolo is putting out: there are plenty of Jimmy Garoppolo’s out there, and there’s only one Tom Brady.