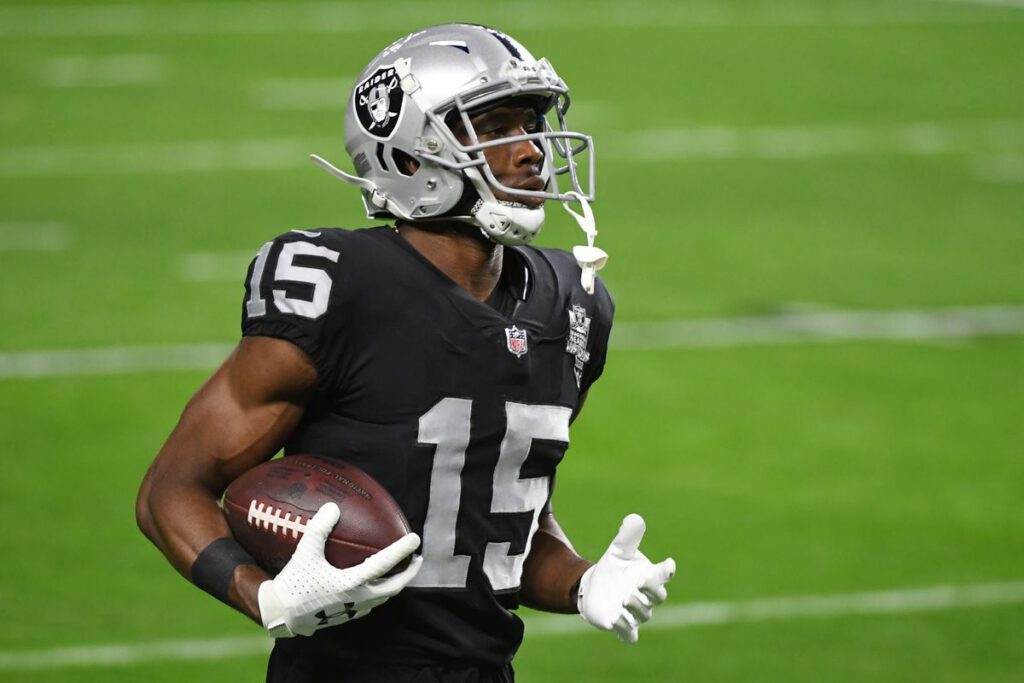 The initial reaction to the Patriots’ signing wide receiver Nelson Agholor to a two-year, $26 million deal was that New England overpaid for a player coming off a career season.

But Agholor will have a $7 million cap hit coming off a career-high 896 yards with eight touchdowns and was the second in the league averaging 18.7 yards per reception in 2020.

Although it’s an overpay relative to his career production, the 27-year-old brings a missing element of speed and is an ascending player entering his prime years.

After reviewing Agholor’s tape, it’s evident that he understands how to play to his strengths by using multiple gears of speed and manipulating coverage downfield to create big plays.

Agholor also has a few intermediate routes in his bag to set up his vertical patterns.

Let’s start with a go ball with a little flair by Agholor to win one-on-one at the bottom of the screen. Agholor likes to use a speed release off the line of scrimmage where his good initial burst allows him to run through contact or eat up cushion. This time, it’s cushion, and Agholor angles his stem inside to get the corner to open his hips. Then, he transitions outside at full speed, and the corner reacts by speed turning his hips towards the sideline, which Agholor answers by running by the CB for six. He also tracks the ball well over his shoulder and finishes through some contact.

Here’s another win on a vertical route against former Chargers cornerback Casey Hayward. Agholor uses a speed release once again to get off the line and inside Hayward. Then, he runs a bending corner route where he stacks over the top of Hayward and holds his line down the sideline to keep Hayward on his back. Plus, tracking and finishing through contact once again.

Next, Agholor made several long gainers off double moves. Above, Agholor fakes out the boundary corner responsible for the deep third along the right sideline with an out-and-up. The boundary corner is reading Agholor’s release, and when he sees the new Pats wideout break outside, he vacates the sideline to help cover the seam route. Agholor then explodes down the sideline, and it’s an easy deep completion for quarterback Derek Carr.

Lastly, Agholor’s speed also threatens defenders when they’re out-leveraged in the secondary. In this play, the Raiders ran a Yankee Concept with a deep post route (Agholor) and a crosser coming from the other side. Kansas City is in a split-safety coverage, and the safety furthest away from Agholor jumps to carry the crosser, leaving the safety matched with Agholor out leveraged. Agholor runs a deep post into the vacated area, and the safety has no chance to keep up.

The Patriots had Damiere Byrd and Phillip Dorsett bring a speed element to the offense over the last few seasons, but Agholor’s explosiveness is more effective despite better-timed speeds.

In other words, defensive backs feel Agholor’s speed more than they did with Byrd or Dorsett.

At the 2015 combine, Agholor ran in the 83rd percentile with a 4.42-second 40-yard dash, which is solid, but he plays faster, and his technique and multiple gears make him difficult to defend.

As is the case with any good deep threat, Agholor is sufficient at setting up his vertical opportunities with sound intermediate route-running to break off chunk plays.

The Raiders would also occasionally move Agholor inside to have him stretch the field horizontally on intermediate crossing routes, a staple of New England’s offense.

In this play, Agholor is at the X spot opposite the two tight ends. He makes his initial movements look like his vertical routes with a speed release, using his hands to fight through contact and a good re-stem to get upfield and stack the cornerback. Then, he slams on the breaks and stops down in two steps on the deep curl.

Now here’s Agholor working against Byron Jones in off-coverage, a corner he’ll see twice a year with the Patriots. This time, he bursts off the line to eat up the defenders’ cushion and gets the corner to open his hips upfield due to the threat of a vertical route. Instead of running a vertical, Agholor fakes an outside break and snaps off a skinny post into the middle of the field for a first-down reception.

Finally, Agholor’s ability to win on over routes, or intermediate crossers, will translate nicely into the Pats offense. The stack alignment gets Agholor favorable leverage working out of the slot. He also throws in a “stair” step where he pushes vertically and then steps upfield towards the corner before breaking off his route across the field. The stair-step creates a horizontal stack, making it harder for the corner to work his way back into the play, and Agholor runs away from the coverage.

The criticism of Agholor’s contract is understandable due to his issues in Philadelphia and inconsistent hands that led to the second-highest drop rate among wide receivers last season.

Drops are a legitimate issue for Agholor, who had nine on 82 targets a year ago. However, with the Hunter Henry and Jonnu Smith signings, Agholor is a viable third option in the offense.