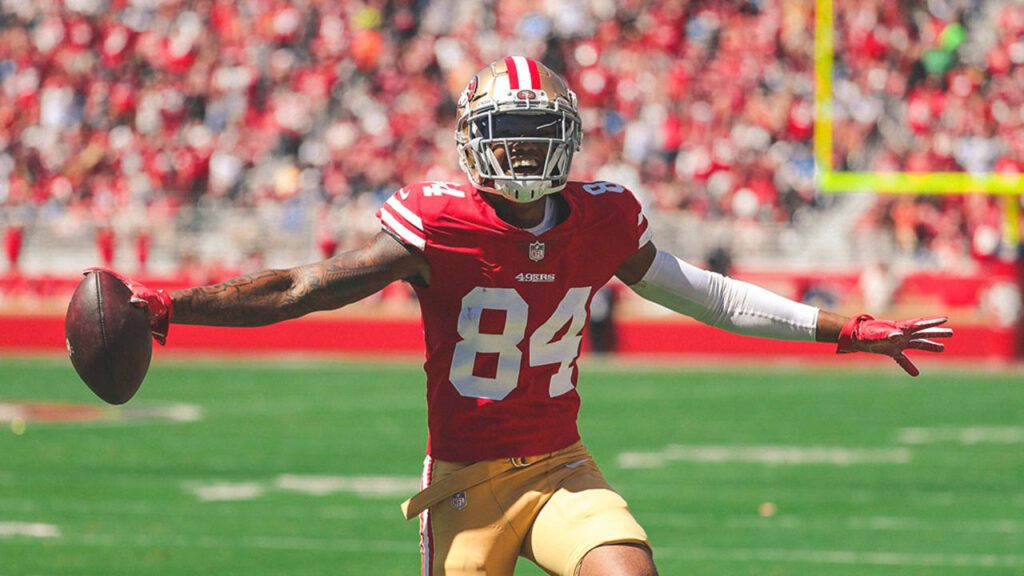 The Patriots continued to sign players coming off career seasons by inking wide receiver Kendrick Bourne to a three-year contract this week.

Bourne had career highs in receptions (49) and receiving yards (667) with San Francisco last season and is still only 25 years old with his best years ahead of him.

Although he’s not the big-name signing some wanted, Bourne brings a skill set to the Pats offense that gives him the tools to succeed in New England as a complementary weapon.

With Hunter Henry, Jonnu Smith, and Nelson Agholor ahead of him, Bourne is a competent fourth or fifth option in the offense.

The player comparison that best describes Bourne’s game is prime Mohamed Sanu, someone that uses technique to win on the outside, smarts to succeed inside, and is tough and dependable over the middle. Sanu had a terrible Patriots career but was a productive player before.

Bourne, like Sanu, isn’t a burner that stresses defenders with speed, but he creates separation with his route-running ability and uses his size to box out defenders at the catch point.

Furthermore, Bourne had a 50-50 split in terms of route alignment, with 46.4 percent of his routes from the slot in 2020. By possessing inside-outside versatility, Bourne checks another Patriots box.

Let’s break down some of Bourne’s tape to give you an idea of what he’ll bring to the offense:

Bourne’s most productive outside reps came when he broke short and intermediate routes off of vertical stems, either out wide or in a condensed split in tight to the formation.

The new Pats wideout is proficient at running both three-step and five-step slants thanks to his footwork at the line of scrimmage and acceleration in his breaks.

Here, Bourne beats cornerback Shaquill Griffin on a three-step slant. Bourne uses an outside motor release to get on Griffin’s toes and attack his outside leverage. By getting Griffin to maintain his outside positioning and go back on his heels, it opens the inside pathway for Bourne to break off the slant route.

Now, Bourne is going to run a five-step slant from the same outside alignment. This time, he’s matched up with Cardinals’ corner Kevin Peterson and beats Peterson at the line with an outside jab fake. Using the jab step on his outside foot, Bourne gets Peterson to hesitate as he tries to mirror the outside release, opening up the inside. Bourne runs vertically for five steps with Peterson on his outer hip, then snaps the slant off coming over the middle.

Another theme of Bourne’s tape was his willingness to work into more favorable passing lanes.

Here, Bourne is in a tight split against Bills All-Pro corner Tre’Davious White. Once again, Bourne is working off a vertical stem. He uses that jab/stutter release to get inside White, charges upfield in his stem, and then breaks down in two steps on a deep curl. He loses White at the top of the route, but there’s an underneath linebacker in the passing lane. As the quarterback moves, Bourne works away from the underneath zone-dropper to give the quarterback a clean look at a completion.

Although Bourne doesn’t win with speed, his technique and physicality at the top of his routes allow him to create enough separation on the outside.

As we mentioned, Bourne also ran 46.4 percent of his routes from the slot, tied for tenth among 30 qualified receivers in catch rate (75%).

Most of Bourne’s success out of the slot comes on a vertical plane where he’s breaking away from the leverage of defenders between the numbers; this is not a Julian Edelman jitterbug.

In this play, the rotating deep safety inserts into a deep hole zone to cut off Bourne’s route. Bourne works off the leverage by breaking towards the sideline, and with the flat route and deep out from the outside receiver, he’s able to find space to sit down in the vacated area.

Here, Bourne is initially open on a dig route from the slot against a split-safety coverage. However, the quarterback is pressured in the pocket. Bourne recognizes his QB is scrambling to the right and works back towards the quarterback. He then lays out to make the catch with two defenders collapsing on him, speaking to his toughness in that area of the field.

Lastly, Bourne would also win up the seam on occasion for the 49ers. Here’s a scenario we could easily see play out with the Patriots this season. The post safety in the deep middle works over the top of George Kittle, opposite of Bourne’s seam pattern. With the post safety gravitating towards Kittle, Bourne runs through a jam from the underneath corner and has leverage on the outside corner playing a match technique. Hunter Henry or Jonnu Smith might draw that post safety as well.

When the Patriots traded for Mohamed Sanu, they thought they were getting a technically savvy route-runner with the football IQ to work open against zone coverage.

Sanu’s Patriots career, mainly due to injury, was a complete bust. However, a healthy Sanu in New England’s offense made sense. Now, they’ll hopefully have a younger, healthier version.

Kendrick Bourne won’t impress fans with explosive plays or highlight-reel grabs, but he should be a steady presence for them that fits the mold of a Patriots wideout.