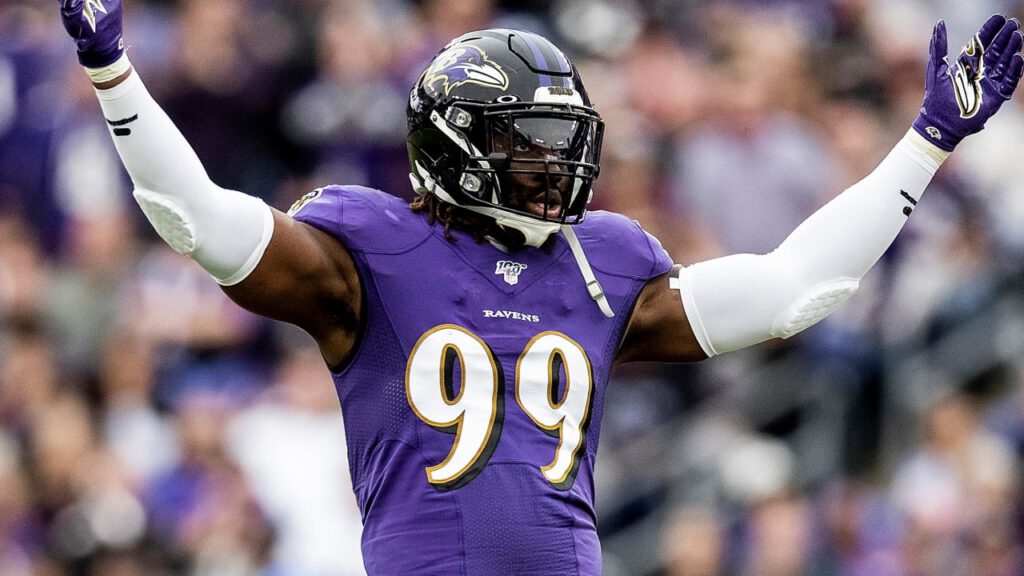 The Patriots’ spending spree carried over to the defensive side of the ball with former Ravens linebacker Matt Judon inking a four-year, $56 million deal with New England.

The two-time Pro Bowler is an ideal scheme fit as an edge defender in Bill Belichick’s defense. He can pass rush, set the edge, and drop into coverage, playing multiple assignments in the defense, which is critical for the Pats.

New England’s defense ranked last in Football Outsiders’ DVOA metric against the run a year ago and allowed 5.2 yards per rush on outside runs (28th); Judon will help immensely there.

The $32 million guaranteed seems like a lot for a player that produced only six sacks and nine tackles for loss a year ago, but here’s why it makes sense:

The former Ravens linebacker’s standout trait is his power and size at the point of attack.

Standing at 6-3, 260 pounds, Judon has the girth, instincts, and upper-body power to be a stout strongside edge-setter in Belichick’s defense. As we know, that’s a critical role.

Here, Judon is aligned towards the formation’s strength over the tight end on the left side. He’s able to step upfield into the outside shoulder of the tight end to reset the line of scrimmage and presses out with his arms to set the edge. Judon forces the ball carrier to cut back into the teeth of the defense, and the running back slips making that cut and goes down.

In this play, Judon produces a similar result for Titans running back Derrick Henry. Over on the right side this time, Judon creates that same movement on the line of scrimmage by setting into the tight end’s outside shoulder and forces Henry to cut back inside. Henry, like the Buffalo running back, slips and goes down for no gain.

Judon introduced himself to new Pats tight end Jonnu Smith as well. This time, Judon establishes outside positioning, and with a strong punch, creates separation from Smith to come off the block and make the tackle on Henry.

New England was flat-out horrible at setting the edge a year ago, and Judon will immediately upgrade that aspect of their defense.

Along with the ability to set a consistent edge, Judon’s pass-rushing style fits the mold as a power rusher and productive player within Baltimore’s various pressure packages.

The new Pats linebackers’ go-to move is speed-rip or chop-rip, where he uses his upper-body power and length to disengage from tackles and turn the corner to sack quarterbacks.

Here, Judon uses a chop-rip to beat the right tackle. He’ll first chop down on the right tackles’ hands to avoid a punch, and as he turns the corner, he rips underneath to get around the tackle and finishes the quarterback.

Judon tests Pats second-year lineman Michael Onwenu’s edge on this speed-rip move. Knowing Onwenu was a bigger tackle, Judon comes hard off the snap and then rips underneath Onwenu to turn the corner and sack Cam Newton.

The last piece to Judon’s pass-rushing repertoire is his effectiveness on stunt schemes.

Baltimore would often use Judon as the wrap defender on stunts, where he comes off a penetrator or two and wraps around his teammates to get to the quarterback. In the play above, Judon starts over the left tackle and executes a “long” stunt to pressure Patrick Mahomes.

One of the hallmarks of Bill Belichick’s defense is discipline, meaning the edge rushers can’t get caught running past the quarterback or out of their rush lanes.

With Judon, the Patriots have a high-IQ edge rusher that will apply pressure on quarterbacks without running himself out of position and will work well with others within the scheme.

New England asks a lot of their edge defenders, and one of those extra duties might be dropping into coverage and playing in space in the flats.

Here, the Giants try to run a misdirection screen with an exaggerated fake to fool the defense. Judon keeps his eyes on the quarterback and triggers to the ball carrier as soon as he sees Daniel Jones release the ball for a tackle for loss.

However, Belichick broke that mold for Judon, a great fit in New England’s system.

As we mentioned before, the Patriots were tremendously weak at edge defender last season. Belichick clearly saw a hole there that needed to be filled by an instant-impact veteran.