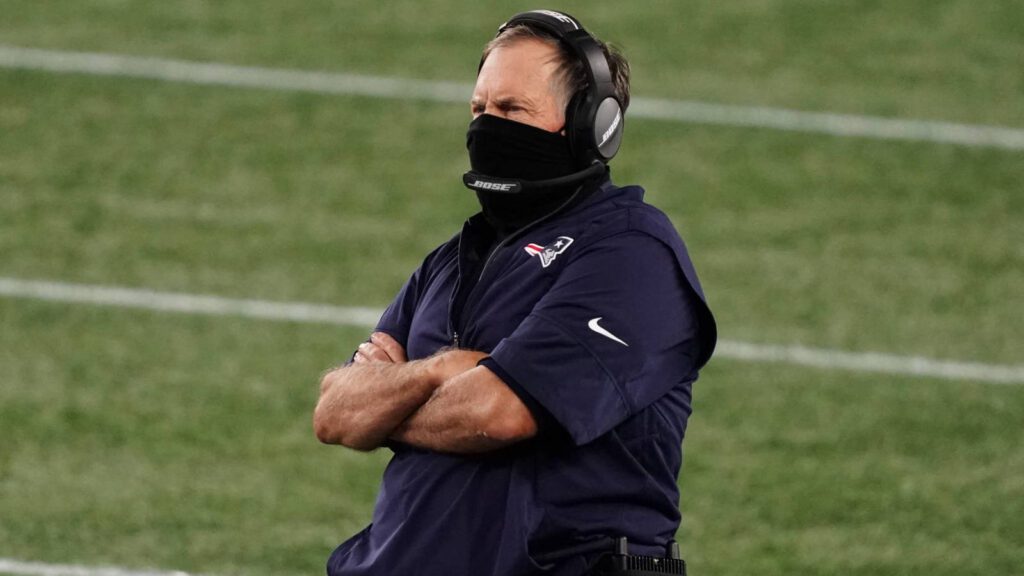 Those that followed the Patriots’ offseason closely knew that regression was coming for New England’s defense this season, but none of us could’ve expected it to be this bad.

Among all the weapons and Cam Newton discussions is a defense that has completely collapsed after a historic 2019 campaign, which is as significant a reason for the teams’ 3-5 record as the offense.

The Pats defense went from the top-ranked unit in Defense-adjusted value over average in 2019 to 31st in Football Outsiders’ DVOA metric this season, a real first to worst collapse.

New England is allowing ten points per game more than a year ago, is 21st in EPA per play, 29th in both team PFF grade and early-down EPA, and regressed in third-down defense too.

Bill Belichick’s group is still producing turnovers at a reasonably high rate with 14 takeaways and is okay in the red zone (13th), but even those marks are well behind their 2019 pace.

The collapse is due to a combination of giving up a few more plays in coverage along with a noticeable decline in pressuring opposing quarterbacks and stopping the run.

Although their pressure rate is above league-average, the Patriots are 22nd in sack frequency, converting nearly half as many pressures into sacks as a year ago (8% to 4.95%).

Most of the shortcomings on defense are a result of limited depth and flat-out bad personnel, which again, we saw coming to an extent, but couldn’t have predicted a total collapse.

Allen, who was brought in to replace Shelton as an early-down run stuffer, has an injury that will end his season before he even plays a down for his new team. That kind of year.

New York’s offense is dead-last in DVOA this season, and Gase feels like a lame-duck coach that is the butt of many jokes, yet even the Jets and Joe Flacco found success against the Pats.

Gase, who is familiar with Belichick’s system from stints with Denver and Miami, followed both the current blueprint against New England and exposed their overall tendencies:

1. The 2020 blueprint: exposing a leaky New England run defense on outside zone and play-action schemes emphasizing short and intermediate passes.

2. Attacking coverage rules: the Pats play the third-most snaps in cover-one (40.6%), so Gase designed ways to take deep shots to his wide receivers against single coverage.

Most of the Pats’ issues defensively are on poor personnel, but teams are finding ways to attack their schemes too.

According to Pro Football Focus, the Patriots allow a league-high 5.7 yards per rush against outside zone schemes, and teams use that as a foundation of their game plans.

The Pats also allow the highest EPA per play on outside zone runs (0.197), which is a higher figure than what they allow through the air (0.164), the typically more efficient way of moving the ball.

New England’s issues in their front seven, whether its defensive line play, edge-setting, or off-ball linebacker, are snowballing into a major problem for their defense.

In outside zone, the blockers on the line of scrimmage all step at a 90-degree angle towards the sideline, stretching the defense horizontally to attack the edges or create cutback lanes.

The Patriots haven’t found a combination along their defensive line that can hold up at the point of attack, sans injured defensive tackle Lawrence Guy, and Wise and others are getting gashed.

After kicking a field goal on their opening drive, the Jets went back to the outside well again.

This time, John Simon sets a firm edge, but once again, the interior linemen, Byron Cowart and Nick Thurman, get blown off the ball by the combination blocks for seven more yards.

As the issues continued to persist, Belichick and his staff began scheming ways to give their front seven defenders a chance against outside zone.

In the diagram above, practice squad call-up linebacker Terez Hall is “spying” the A-gap, meaning he’s just going to blitz the play-side A-gap no matter what. Instead of trying to anchor against Becton, the Pats run a twist with Wise and Simon switching gaps at the snap.

As we roll the play, Simon overruns his gap, basically ending up in Hall’s A-gap rather than his assigned B-gap, and Frank Gore runs through a diving tackle attempt by Hall for a 15-yard gain.

Even with Belichick’s tricks, the Patriots couldn’t stop the Jets’ outside zone rushes until Becton left the game due to injury, putting into perspective how bad things are in run defense.

The next step for any team facing the Patriots defense is to marry their zone runs with a play-action passing game that averages 11 yards per attempt against New England.

The Jets dialed up play-action nine times on Monday night, with Flacco going 7-of-9 for 130 yards (14.4 average) and a touchdown.

Here, the Jets merge their outside zone runs with bootleg action against New England’s nickel defense. Playing in the box as a linebacker, safety Terrence Brooks (no. 25) is slow to react to the fake, and Flacco hits tight end Ryan Griffin for 23 yards on a crossing route.

Typically, teams will attack Ja’Whaun Bentley, who missed Monday’s game due to injury, on similar bootleg actions with pass routes right behind the linebackers in run-pass conflict.

Whether it’s due to a lack of team speed, play recognition or both, the Patriots can’t stop play-action or outside zone runs.

The Jets’ game-plan specific wrinkles were a big part of their script, but Gase’s knowledge of the Patriots’ coverage system led to several big plays as well.

The Patriots are currently sixth in EPA success rate out of cover-one, which again, they play the third-most out of any defense in the league, after finishing second in their stellar 2019 season.

Without Stephon Gilmore in the lineup, third-year corner JC Jackson moves up to CB1 duties and has allowed nine catches for 181 yards and two touchdowns in their last two games.

Gase knew he would get post-safety coverage and plenty of cover-one, so he held deep safety Devin McCourty in the middle of the field to give Perriman single coverage.

Without safety help over the top, Perriman worked Jackson on a stutter-and-go double move that came right after the Jets wideout ran a deep curl from a similar look. Jackson loses at the line of scrimmage, allowing Perriman inside leverage, then pauses long enough at the top of the route for Perriman to blow by him for six.

Although they had success late in the game, opposing offenses are also no longer confused by the Patriots’ cover-zero schemes.

The Patriots only pressure the QB on 38% of their blitzes, 20th in the NFL, as quarterbacks and play-callers are prepared for their pressure schemes.

In this play, the Pats remove the deep safety, and when the running back stays into block, it converts to a full-on zero blitz with seven defenders in the rush. However, the pressure doesn’t get home, and Flacco has an easy answer on a slant to Denzel Mims against an out-leveraged Jason McCourty for another chunk play.

Last season, throwing on the Patriots defense led to nearly as many turnovers (10) as passing touchdowns (12). But that’s no longer the case as the execution and intimidation aren’t there.

Lastly, Gase pulled out one more trick to fool New England’s coverages by exploiting their rules against bunch or stack formations.

In this example, the Jets are in a bunch formation. Based on the defensive backs’ ailment, New York knows that the Pats are using box rules to leverage routes out of the bunch. Joejuan Williams is locked in on the point man, while Jason McCourty takes the outside release and Jon Jones takes the inside release.

To combat those rules, the Jets ran two in-breaking routes that left the outside dig route open. Jones, the inside corner, can only leverage one of those in-cuts, leaving McCourty out-leveraged. The Pats brought another blitz there, adding to the problems with nobody helping Jones in the middle of the field, and Flacco gets rid of the ball in time for an easy third-down conversion.

Gase and the Jets coaching staff deserve credit for a good game-plan that attacked the Patriots’ coverage schemes’ weaknesses.

ARE THE ISSUES FIXABLE?

The logical question for any Patriots fan is, are the issues fixable? Yes, and no, with no easy answers.

The first step is a return to the field for Gilmore, whose value to the defense has never been higher, but most of the issues have nothing to do with the reigning Defensive Player of the Year.

In the front seven, the Pats don’t have the personnel to fix these issues without significant improvement from within, and quickly.

Newcomer Carl Davis could be an early-down answer alongside Lawrence Guy when both are healthy. If Davis and Guy can hold down the run strength side of the formation, then maybe Wise and others can handle easier backside responsibilities.

Belichick is also having problems finding edge-setters as John Simon has struggled while Chase Winovich hasn’t developed into a stout run defender at this point.

The issues at edge defender and defensive line are so prominent that the team is leaning on practice-squaders Tashawn Bower and Nick Thurman in significant roles.

New England could also benefit from their top picks in April’s draft in Dugger, Uche, and linebacker Anfernee Jennings becoming factors in the second half of the season.

Defensive captain Ja’Whaun Bentley didn’t suit up against the Jets, but his slow lateral movements and recent tackling issues are part of the problem.

Dugger showed promise to start the season as a box safety/linebacker hybrid before an ankle injury slowed his progress, while Uche spent the first six games on IR and is slowly coming along. Jennings doesn’t play fast, probably due to inexperience, but could help at his natural position as an outside linebacker.

Other than that, it’ll be up to Belichick to find new ways to confuse opposing quarterbacks and break coverage tendencies to keep offenses off-balance.

The Patriots’ entire roster is in a rebuild, but for a team that wants to win games with their rushing attack and good defense, the defense isn’t holding up its end of the bargain.