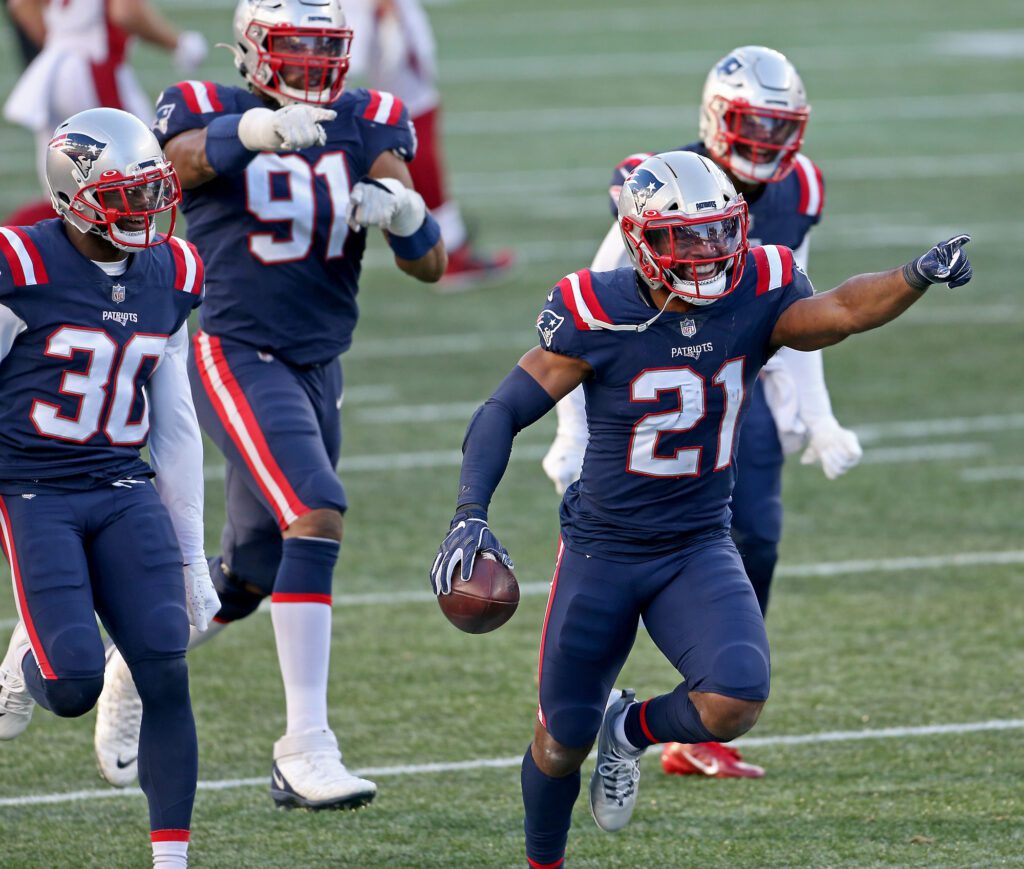 FOXBOROUGH, MA. - NOVEMBER 29: Adrian Phillips #21 of the New England Patriots celebrates his interception during the second half of the NFL game against the Arizona Cardinals at Gillette Stadium on November 29, 2020 in Foxborough, Massachusetts. (Staff Photo By Matt Stone/ MediaNews Group/Boston Herald)
Share
Facebook Twitter Email

The Patriots offense led by quarterback Cam Newton has its limitations, but up until last week, they weren’t getting much help from their defense or special teams.

This season, New England’s offense ranks 30th in the NFL with an average starting field position of the 25.7-yard line, meaning they need to go nearly 75 yards for a touchdown.

Believe it or not, Newton and the Pats offense is making progress on their possessions, gaining an average of 40.3 yards per drive, which is the second-most in the league only behind Kansas City.

However, New England is 27th in offensive points per game (19.8); they’re gaining yards but cannot string together consecutive positive plays on long drives to finish with touchdowns.

Asking an offense that doesn’t recover easily from negative plays or produce many explosive plays to drive the length of the field routinely is feeding into their issues as much as anything.

Last week, the Pats offense, which only scored 20 points due to its own struggles, finally got some short fields thanks to the other two phases, a more sustainable formula moving forward.

New England had two monster returns of over 50 yards in the kicking game against the Cardinals, and Adrian Phillips’s interception set the Pats up on Arizona’s 31-yard line.

The Patriots scored 17 of their 20 points off those short fields, which is the type of complementary football head coach Bill Belichick wants.

“That’s always something you want to do. Play good complementary football and the units helping each other out – giving the defense field position, defense and special teams trying to create field position for the offense, and then the offense taking advantage of it when we get it,” Belichick told CLNS Media on Tuesday.

“We’ve turned the ball over a decent amount this year. We haven’t had a lot of return production until last Sunday. But, yeah, the field position, putting the offense on a short field, that’s our objective every week.”

The Patriots won’t get field-flipping returns from Donte Moncrief and Gunner Olszewski every week, but they should also get better quarterback play from Cam Newton.

In the win over Arizona, Newton’s downfield accuracy hit rock-bottom.

The veteran quarterback is an inconsistent mechanical thrower, which we’ve discussed at length, so let’s not beat a dead horse. Still, Sunday’s win was even worse than anything we’ve seen this season from Cam.

As the chart above shows, Week 12 was an outlier. Newton’s completion percentage over expected differential of -16.9 was by far his worst output of the season, and he was pretty stable in his other nine starts. Yes, some games were better than others, but it was never that bad.

Here’s further evidence that Newton’s performance last week was an anomaly, using Sports Info Solutions’ on-target percentage to show that Cam cratered in a way we haven’t seen before.

Assuming Newton’s poor performance was a one-game thing rather than a trend, the Patriots’ offense, aided by more favorable field position, will hopefully look better than it did on Sunday.

At various points this season, I’ve written about the struggles of the Patriots’ defense and how those are more troubling than issues offensively.

Below, we’ll go over how the Patriots defense is making strides to improve on early-downs, which awakens their potent third-and-long schemes that generate sacks and turnovers.

The key to getting into obvious passing situations where the Patriots can dial up pressure and produce turnovers is better early-down defense.

This season, the Patriots defense is 30th in expected points added and dead-last in success rate on first and second down, but we are starting to see signs of improvement.

Over the last four weeks, New England is fifth in expected points added per rush, a noticeable improvement, and their early-down pass defense was much better against Arizona as well.

The Cardinals produced an EPA of 0.04 and a success rate of 42 percent on first and second down against the Patriots defense, a significant improvement for New England.

Entering Week 12, the Cardinals had the fifth-best rushing attack in the league based on Football Outsiders’ DVOA efficiency metric, but the Pats held them in check all afternoon. In fact, Arizona’s EPA per rush was in the negative against New England (-0.10).

The Pats’ plan against Kyler Murray and the Cardinals’ running game was to force Arizona’s running backs to beat them by encouraging Murray to hand the ball off on read-option plays.

By subtracting Murray from the equation, they got the ball out of Arizona’s most dangerous ball carriers’ hands, and then their defensive line and linebackers went to work on the backs.

The big bodies up front had arguably their best games of the season, occupying combination blocks on the line, allowing Bentley, who had a team-high six stops, to make plays.

Here’s a great example of both New England’s strategy and Lawrence Guy’s block-eating abilities in the trenches. First, Chase Winovich (right) sets a wide edge to encourage a handoff. Guy makes the play, though, by occupying the front side combo from the right guard and center to keep Bentley clean behind him. With none of the O-Line reaching the second level due to Guy and Spence, Bentley is free to mirror the running back and makes the stop.

The Patriots continued to set wide edges, sometimes with dual-edge rushers, to make sure Murray didn’t beat them with his legs, and again, Guy and company were tremendous.

In this play, rookie Anfernee Jennings sets the edge to encourage a handoff to the back, while slot corner Jonathan Jones covers Andy Isabella’s route on the RPO. With Murray’s options of running and throwing shut down, he gives it to the running back, and Guy once again defeats a double-team. The combination here is for the left guard to displace Guy and then climb to Terez Hall on the inside zone scheme, but it never happens because Guy holds up both blockers, keeping the linebackers clean, and Bentley and Hall flow to the ball carrier.

Although those are only two plays, I could show you several more where New England’s defensive line spearheaded one of their best days of run defense on the season.

Even when the Cardinals designed running plays for Murray, the Patriots were ready. Above, the Cardinals try to run a crack-block scheme for Murray to get out on the edge. However, Stephon Gilmore replaces the edge defenders when Hopkins goes to block, gets outside leverage on the motion block, and ushers Murray out of bounds.

The Patriots defense, which ranks 28th in DVOA against the run, has struggled to stop the run for most of the season. But are hopefully building towards a turnaround in that department.

Another troubling trend for the Patriots defense this season is their failures against play-action, which speaks to their lacking coverage at the second level.

New England allows a league-worst 7.99 passing yards per attempt against play-action and are 21st in EPA per play, but they might be rounding into form there too.

Last week, Murray averaged just 3.9 yards per pass attempt on his 12 play-action pass attempts with a passer rating of 68.3.

In the audio breakdown above, the Patriots expertly pass off a “dino” concept with double posts to the quarterbacks right trying to put the deep safety in conflict and Bentley “robots” underneath the tight end’s crossing route in a perfect coverage rep for the Pats defense.

Thanks in part to the emergence of rookie safety Kyle Dugger, the Pats are also getting better at defending passes behind the line or motion screens that torched them against the Niners.

Here, the Cardinals try a similar motion screen to Andy Isabella, but Jonathan Jones defeats the block by the tight end, and Dugger closes in a hurry to make the stop for a short gain.

Now that the Patriots are making stops on first and second down, their defense’s real strength can shine with their third-down schemes.

With an average of 5.7 yards to go on third down, New England put themselves in a position to pressure Murray in passing situations.

The Patriots are a good third-and-long defense, ranking seventh in third-down conversion rate on third-and-7 or longer, but have seen the third-fewest third-and-longs this season. Again, crappy early-down defense.

In this audio breakdown, we’ll go over a third-and-12 where the Patriots show a cover-zero blitz, but defensive tackle Adam Butler drops off the line into an underneath zone. The Patriots show a seven-man pressure before the snap, leaving the running back on Chase Winovich, and Butler and Myles Bryant pop-out underneath Murray’s “hot” route to force an incomplete pass.

Although they’re playing without a deep safety, the Pats don’t always bring all-out pressure. Instead, they’ll threaten pressure to get either a free rusher or droppers into passing lanes.

In the third quarter, the Pats show another all-out blitz against an empty formation. Murray knows he needs to get rid of the ball quickly, as does the defense, so Winovich and Bentley get into the passing lane of Murray’s “hot” route. The two force Murray to hold the ball in the pocket, and Adam Butler tips his eventual pass attempt in the air, and it’s intercepted.

Along with cover-zero blitzes and bluffs, the Patriots will simulate pressure in other ways to get one-on-one matchups and take advantage of protection rules for the offensive line.

Here, the Patriots show a five-man pressure before the snap, but Phillips drops off the line into coverage. Although Phillips drops, the right tackle and guard still step to him and Wise on the right side, which opens a path to the quarterback for Winovich when he wraps on the stunt.

New England’s defense was going to take a step back given the roster turnover, but dropping to 32nd in the league in DVOA was not the plan heading into the season.

With the defense failing to get off the field and the return units struggling, the Patriots’ formula of good defense and special teams setting up their offense for easy scores vanished.

Unfortunately, it could be too little too late for New England’s playoff hopes, as they only have a 12 percent chance of making the postseason, according to FiveThirtyEight.

But the formula we saw on Sunday from Bill Belichick’s team was the script they wanted all along. Now Cam and the offense needs to take advantage.