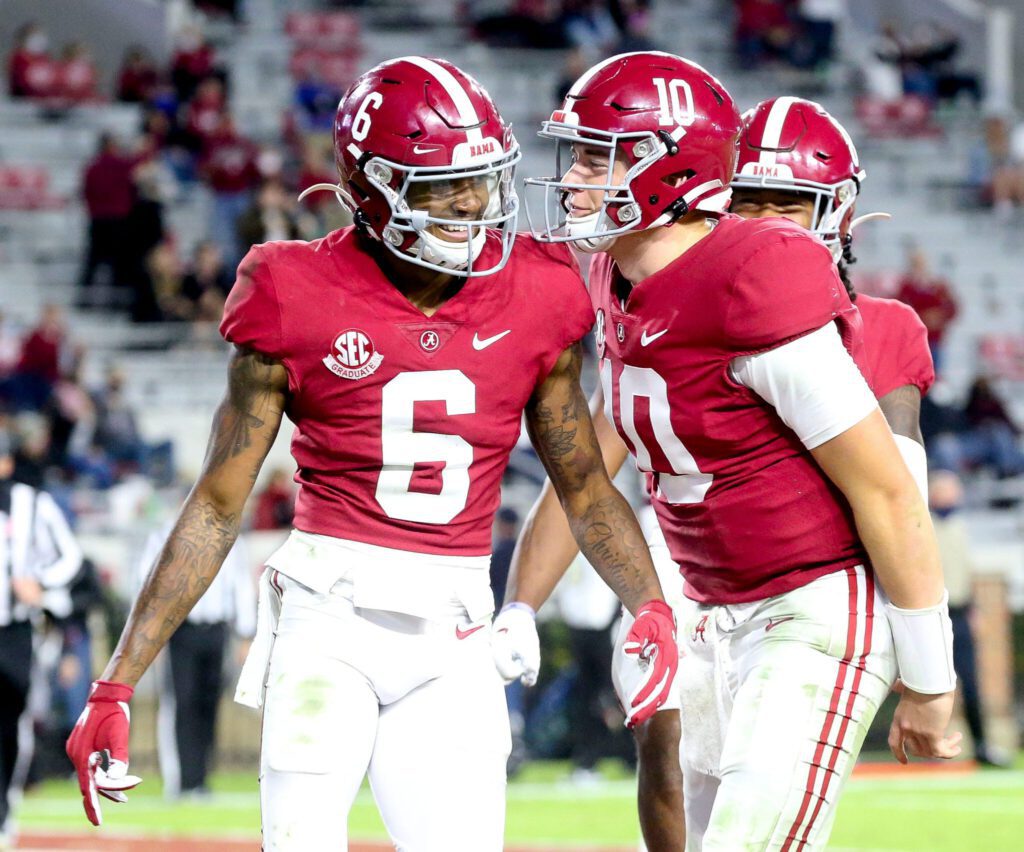 The College Football Playoff National Championship between Alabama and Ohio State is filled with NFL draft prospects to watch as Patriots fans.

Patriots head coach Bill Belichick has ties to both programs, mainly Nick Saban and Alabama, but he also got to know Ryan Day’s staff through former Buckeyes coach Urban Meyer.

As much as we’d like to discuss Ohio State quarterback Justin Fields, we don’t share in Todd McShay’s view that the dual-threat quarterback will be available in the middle of the first round.

Other prospects, such as Alabama wide receiver Jaylen Waddle and center Landon Dickerson, are injured and won’t participate in Monday night’s game.

Here’s a quick viewers guide for Pats fans on players to watch in tonight’s game that kicks off at 8:00 p.m. ET on ESPN:

Alabama loves to run the “dino” concept or double posts when they get single-high. Here, the deep safety runs with the inside post, and Jones throws a well-timed deep ball to the outside receiver to beat the safety trying to recover. Timing, ball placement. pic.twitter.com/wyVaLKbOWt

The Alabama quarterback checks a lot of boxes for the Patriots. He’s accurate to all three levels, has a quick release, throws with great touch and anticipation, and is well-versed in reading out a full-field progression. Stylistically, he has New England written all over him. However, some legitimate concerns make it difficult to pound the table for Jones in the first round. For starters, he’s surrounded by arguably the most talented supporting cast in quite some time. Then, there are question marks about his overall arm talent and poise under pressure. Jones tends to get happy feet and fade away from pressure in the pocket, and without a big arm, that leads to trouble. Ohio State’s defense is the perfect litmus test for Jones. The Buckeyes are good enough in the secondary to battle with Alabama’s receivers, and OSU has a terrific defensive line that could get pressure up the middle on Jones. If the redshirt junior handles that and the stage well, he could be in Foxboro next season.

make the whole plane out of devonta smith pic.twitter.com/uQBYwwxbOq

There are very few collegiate prospects that combine technical savvy and explosiveness as well as the Heisman Trophy frontrunner. Smith is an incredibly smooth route runner and added another gear this season. The NFL comparison for Smith is Hall of Famer Marvin Harrison, which doesn’t feel like a stretch. He can play inside or outside, gets on defenders quickly in his stems, knows how to get out of his breaks, battles at the catch point with strong hands, and does it all at top speed. Based on how Alabama calls their offense, Smith was the coaching staff’s favorite target over the last two seasons in a group that included Jerry Jeudy, Henry Ruggs, and Jaylen Waddle. Smith might be gone by no. 15, but if he isn’t, he’d be a home-run pick for the Pats.

Patriots fans might complain if the team goes with a cornerback in the first round. Still, with Stephon Gilmore’s future uncertain, Surtain should be on the watch list. Alabama’s coverage system, which includes mostly press-man and match zones, is very similar to New England’s scheme. Surtain is a shutdown corner for the Crimson Tide with excellent press-man skills and the length to get his hands on passes. Surtain’s patience at the line and trust in his technique resembles Gilmore’s brand of man coverage. His hips hardly ever open too early, and he stays square until the route to declares to smother receivers in the first five yards. Even if you don’t want to see a corner in the first round, Surtain is a perfect fit with the Patriots at a potential position of need.

Tough, dependable, versatile, and a man/gap scheme fit; Leatherwood screams Patriots. He has experience at both guard and tackle spots with a filled-out frame to impose his will. Leatherwood’s pass sets are smooth, and he has plenty of foot speed to mirror edge rushers. However, his change of direction and flexibility are only so-so, which presents problems when he faces explosive edge rushers that can change directions quickly. As a run blocker, he connects well and definitely creates movement. The Patriots might want to add depth at offensive tackle with Isaiah Wynn’s issues staying healthy and uncertainty in the interior of their offensive line. Rookie sensation Michael Onwenu could move inside to guard, and Leatherwood would be a potential day-one starter at right tackle.

Moses is the latest in a long and successful lineage of Alabama linebackers. He has played all three linebacker spots and has plenty of game experience, but would fit best off the line. Like most Alabama linebackers, Moses is an aggressive take-on tackler and off-ball blitzer in passing situations. He also possesses the necessary lateral agility to scrape into gaps at the second level. There’s a lot of C.J. Mosley and Dont’a Hightower in his game, but he does have an injury history that will likely push him down the board. Moses won’t be in play at no. 15 but should be in the mix with the Patriots’ second pick of the draft.

The Patriots need to work on the defensive line this offseason, and Barmore fits the bill. He mostly lined up as a one or three-technique for the Crimson Tide on early downs, where his upper-body power, length (6-5), and aggressive hands made him an immovable object. However, Alabama also played him at defensive end in their odd fronts, his likely role in New England. Although he’s more of a penetrator than a two-gapper, at roughly 310 pounds, Barmore should have no issues holding up at the point of attack. He’d be a nice get for New England on day two.

After watching Alabama beat Notre Dame in the semifinal, I was surprise to learn that the draft community isn’t very high on Forristall. He’s got a lanky frame at 6-foot-5, 235 pounds, but he shows excellent effort as a run-blocker and can move around the formation as a receiver. Alabama uses him on tight end screens and other short passes while he also runs the seam occasionally. As far as Alabama prospects go, Forristall could be a nice sleeper.

Davis is one of the best offensive line prospects in this year’s class and projects as a starting guard in the league. He can play in multiple schemes and is an absolute force at the point attack. The Buckeyes’ guard also has excellent lateral movement and footwork to connect on combination blocks or climb to the second level. There will be a few things to clean up, such as playing under control and anchoring in pass protection, but he’s a plug-and-play starter if the Patriots are in the market for immediate interior OL help.

Chris Olave is one one of the best route runners in college football. Pure, fluid, explosive – the true sophomore has it all.

Wisconsin has to commit multiple defensive backs to stopping his vertical presence. pic.twitter.com/fAC0yhH56q

Yes, yes, and yes. Olave’s performance in the College Football Semifinal put him in the first-round conversation, as he’s a technician with a fantastic feel for middle of the field coverage. Olave’s spacing and ability to find pockets in zone coverage is outstanding. Plus, he can play inside or outside, projecting into a “Z” receiver role at the next level. Olave’s best routes are deep overs/crossers, double moves, and patterns that break back to the line of scrimmage. He’s excellent at setting up his angles and uses multiple moves in his breaks to get corners to bite in man coverage. The Buckeyes wideout is one of the best route runners in the class, and if he has a big game on Monday night, he’ll give himself a chance to sneak into the backend of the first round. Either way, Olave is a top 50 prospect.

Depending on how they view him, the Patriots might not need Wade, but he can play. Many scouts project Wade in a strong safety or nickel role at the next level. Think Kyle Dugger or Patrick Chung as a box or slot defender. Wade’s hip transitions aren’t smooth enough for outside work, and he’s at his best playing in zone coverage where he can click and close to the ball. Still, he’s an NFL player, and the Patriots love themselves a versatile safety.

Easily one of my favorite prospects to watch in Monday night’s championship game outside of the first-rounders. Garrett is a wall in run defense that can align at either defensive tackle or defensive end, depending on the front. He’s got immense hand strength to separate, shed, and find the ball while also drawing blockers in pass-rush situations. Garrett projects mostly as a two-down player in the pros because of limited twitchiness in his pass rushes, but he’d look great next to Lawrence Guy as an early-down run stuffer. Sign me up on day two.

Myers will go higher than his pecking order on the list, but I don’t love his fit. He sometimes struggles to move big DTs at the point of attack and can get caught in the quarterback’s lap with a poor anchor. Still, he’s got some movement skills and is a cerebral player that understands how to adjust on the fly. His shotgun snaps are solid, and in a zone scheme, he’ll be a starter. The Patriots ran more inside zone this past season, but they’re more of a man/power running team. Still, the Pats have zero depth behind starting center David Andrews, who is a free agent. Who knows how long Andrews will continue to play?

Assuming New England sticks with a base odd front (3-4), Werner would fit nicely at inside linebacker. The Buckeyes also used him in a SAM or overhang role, lining up over tight ends. He’s a little undersized for them at 6-foot-3, 242 pounds, but he’s also projected as a late day-two pick, so maybe they’d look past that. Werner has decent coverage skills while possessing the necessary power and hand strength to hold up against the run. He also finishes tackles and has long arms that present a wide tackle radius. The Ohio State linebacker has the typical cliche traits with a great nose for the ball and is a physical player that could play in the kicking game. He’s a good fit for New England.