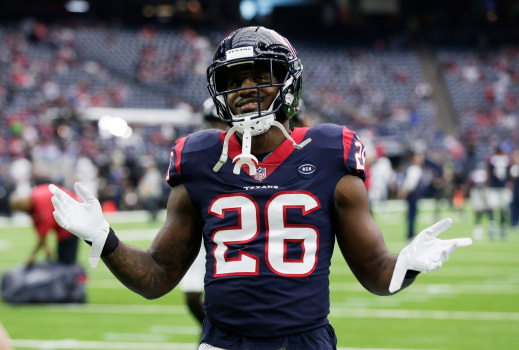 Patriots quarterback Cam Newton and newly acquired running back Lamar Miller have something in common besides joining New England’s offense this offseason.

Both first-year Patriots come with major injury caveats that, amidst excitement about the signings, leaves us all saying, “yes, they could be great if they stay healthy.”

The 29-year-old is now nearly a full year removed from the injury, and structurally, his surgically repaired knee is healed, but he’ll need to prove that his explosiveness is all the way back.

If he returns to his 2018 form, Miller was a viable NFL starter for the Texans that accumulated over 1,100 scrimmage yards in his last healthy season as RB28 in Football Outsiders’ rankings and RB24 in PFF grade.

Following a deep-dive into Miller’s tape, what stood out the most wasn’t necessarily his play. Instead, Bill O’Brien’s adaptation of the Patriots’ Erhardt-Perkins offense for quarterback Deshaun Watson was the draw.

Miller fits the scheme as an explosive 4.34 guy, and Patriots offensive coordinator Josh McDaniels and his staff can use Houston’s offense as a source of inspiration this season as they adapt the scheme to Newton.

O’Brien’s offense still uses option routes, route conversations, and sight adjustments in its traditional drop-back passing game, but now there are packages and play designs tailored to Watson’s mobility, something the Pats staff is working on doing with Newton.

In Houston, adapting meant installing an RPO package (ten percent of plays), zone and gap-read runs that feature Watson’s running abilities, and a fantastic naked bootleg series out of a full house formation.

Along with specialized packages that amplify Watson’s athleticism, the Texans also feature an under center bootleg series off of wide zone action, and a higher volume of deep throws.

Miller accumulated over 2,400 yards playing alongside Watson from 2016-2018, and the signing feels like the Pats are dropping hints about where the offense is heading with Newton.

Let’s start with a more traditional setup that puts Watson under center running both gap/power and zone blocking concepts leading to quite a few explosive runs for Miller.

Since entering the league in 2012, the speedster is the only running back in the league with two rushes of 90-plus yards, and the last one came against the Tennessee Titans in 2018.

On the play, Houston runs a typical Pats scheme, one-back power, with a double-team in the A-Gap and the left tackle pulling as the offensive line folds the defensive front. Miller makes a decisive cut inside the puller, then shows excellent contact balance to run through the linebackers’ tackle attempt at the second level, makes a smooth vertical cut to get past the safety, and uses that 4.34 speed to pull away from the defense for a long touchdown.

The Pats version might feature a pulling guard rather than a tackle, and New England might run two-back power or counter play with a fullback leading the charge, but the idea of the scheme is the same.

Although NFL offenses gash defenses with power schemes all the time, it’s the Texans’ bootleg series with Watson’s running threat that puts the defense in a bigger bind.

As the audio breakdown above shows, the threat of Watson keeping on the bootleg action holds the backside, which buys Miller time and opens up cutback lanes with the backside defender, usually a defensive end or outside linebacker, accounting for the quarterback.

Here’s another audio explainer where Watson holds the backside of the defense on the bootleg action, giving Miller the time and space to set up his blocks to “bang” the run behind the left tackle.

Although that piece was written with Jarrett Stidham in mind and could be Stidham, the concepts are the same and will work effectively with either Patriots quarterback.

Along with their under center rushing attack, the Texans feature a heavy dosage of option plays tailor-made for Watson, which is difficult for defenses, including the Patriots, to stop.

The first package we’ll go over is Houston’s zone-read concepts that give Watson the option to keep the ball himself or hand it off to the running back, in this case, Miller.

In this audio breakdown, Houston’s inside zone-read play in a red zone situation works to perfection. With the Jags in an over front, the read for Watson becomes easy, as Yannick Ngakoue crashes down to take the quarterback, leaving an opening in the B-Gap for Miller, who powers his way into the end zone.

The other series of plays the Patriots ought to borrow from their old friends in Houston is a “naked” package out of a full house formation that we absolutely love for the Patriots, Cam, and their rookie tight ends.

Watson recently broke down the package during a film session with NFL Network’s Kurt Warner and Brian Baldinger. Essentially, these looks become a triple-option for the quarterback, where Watson can keep it himself, hand it to the back, or throw the ball to the tight end sliding across the formation.

In their win over the Patriots last season, the Texans got a walk-in touchdown off the concept after the tight end was left uncovered due to the linebackers reacting to the zone-read action.

Following his first season with the Texans in 2017, Bill O’Brien got in the lab and started remaking his playbook to alter it to the strengths of his new star quarterback in Watson.

The Patriots don’t have a full offseason to cook up ideas for Newton. But between his offenses in Carolina, and a scheme with similar roots in Houston, the Pats have a blueprint.

As for Miller, his breakaway speed, decisive one-cut abilities, and veteran savvy and experience in the Texans offense make him a clear fit if he can recapture his pre-ACL tear explosiveness.

Plus, when Houston went to their spread passing attack, Miller was a useful check-down option for Watson, who can make defenders miss after the catch and caught 92 passes with the Texans.

The theme of the signing doesn’t necessarily have to do with Miller, although his speed and burst are certainly a bonus with these new concepts that the Pats didn’t have on their roster.

Instead, Miller’s addition drops major clues as to what Josh McDaniels has in mind for the Cam Newton iteration of the Patriots offense, as both Newton and Watson bring similar things to the table.