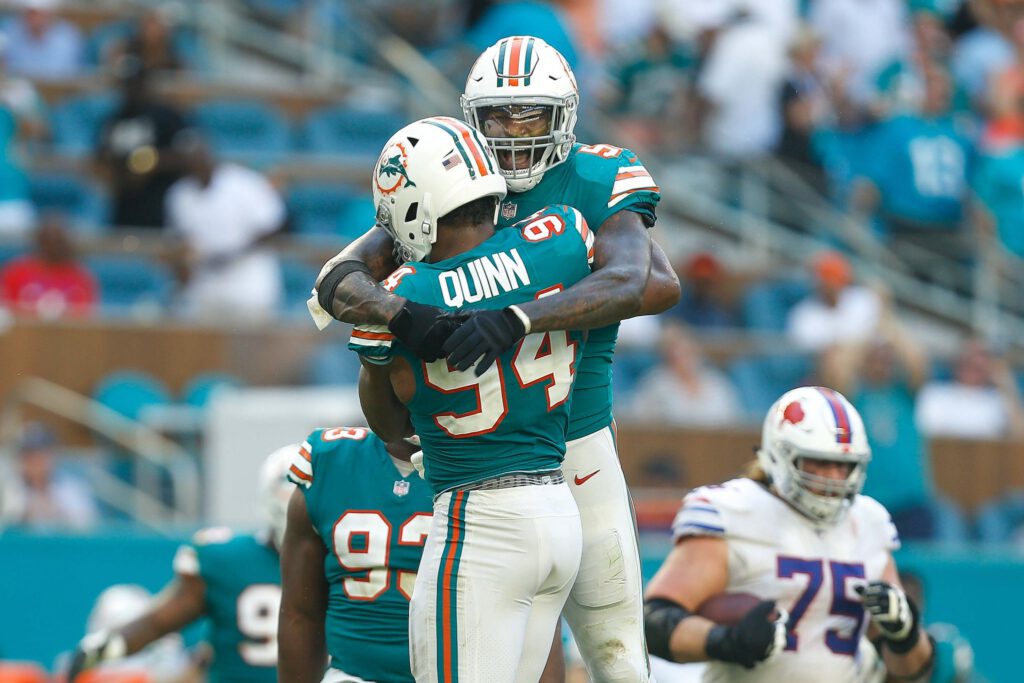 FOXBORO, MA — The Patriots’ record in Miami with Tom Brady under center makes most people uneasy about the team’s upcoming trip to South Beach.

Although you can’t deny a trend when you see one, this year’s matchup at Hard Rock Stadium will come down to the players on the 2018 Dolphins and Patriots, not the Miami teams featuring Hall of Famer Jason Taylor in the early 2000s.

Similar to Taylor, however, who sacked Tom Brady more than any player in his career, Dolphins defensive end Cameron Wake picked up where Taylor left off when he came onto the scene in 2009.

Wake is fourth on that list, sacking Brady 10.5 times in his career, and like Brady, he’s not slowing down eight weeks before his 37th birthday.

“He does a really good job of attacking the blockers, defeating the technique that they’re using, whatever it is – offset, quickset, hand punch. He’s got good counters to all of those, and he’s got a really good motor. Athletic, hard to knock off his feet, cut blocks and things like that he just steps right over them. He’s quick enough to turn the corner. He’s got a good inside move. He takes the deep-set tackles and powers them back and is disruptive that way. He’s very experienced and can adjust quickly to however the set or the play develops with his rush.”

When these two teams played in Week 4, the score (38-7) would indicate that the Patriots dominated the Dolphins in every facet of the game.

And in last week’s win against the Bills, Wake and Quinn combined for ten quarterback pressures, including a crucial strip-sack by Quinn in the fourth quarter.

“They’ve got as good an edge rush as anybody in the league,” Belichick said. “Those guys are very, very explosive and they play hard. They both have great motors. Again, they can hit the edge. They can come inside. They’re good on games. They can turn speed into power. It’s a tough matchup. They’re really good out there.”

Below, we’ll go over some of the ways that Miami’s defensive end duo disrupted the Patriots’ offense when these two teams met in September:

In his tenth NFL season, Wake continues to wreak havoc on opposing quarterbacks with the best of them.

Wake’s 11.2 pass rush productivity rating which measures pressures on a per snap basis is tied for the fifth-highest mark in the NFL this season, according to Pro Football Focus.

Back in Week 4, Wake made his presence felt both in the passing game and in the running game.

Throughout his career, Wake has mostly rushed on the left side of the defense, setting up a matchup with Pats right tackle Marcus Cannon when these two teams square off.

Wake registered one quarterback hit on Tom Brady ten weeks ago, and Brady still managed to get the pass off to wide receiver Phillip Dorsett for a touchdown, but Wake’s pressure made this a painful score for the Pats quarterback.

On the play, Cannon sets vertically to try to square up Wake, who often likes to beat tackles with a speed rush around the edge. However, Wake, as Belichick mentioned earlier, is excellent at diagnosing pass set during the play. He sees Cannon set vertically, which offensive lineman typically use to stay square for as long as possible, and he threatens an inside move with a jab step to the inside before countering with a jab-and-go move to bend the edge. Once he begins to go around Cannon, Wake finishes with a rip move by getting underneath Cannon’s punch to keep his body clean allowing him to continue around the rush arc. Wake closes on Brady and delivers a hit on the Pats quarterback as he releases the pass to Dorsett.

Cannon was able to hold Wake to three hurries outside of this play, but the Dolphins pass rusher is as technically sound as they come along with being a freak athlete.

During his career, Wake has made five Pro Bowls because of his abilities as a pass rusher, but he can also convert his explosiveness into power to make plays in the run game.

Here, the Patriots have first and goal from the Dolphins’ one-yard line. Wake is in a wide-nine technique on the outside shoulder of tackle LaAdrian Waddle. At the snap, Wake explodes off the line of scrimmage and attacks Waddle’s inside shoulder knocking the Pats tackle back into running back Sony Michel to blow up the play on the goal line.

Wake is known for converting speed to power to bull rush tackles in the passing game, but tackles with soft inside shoulders will feel him force his way through the line in the running game as well.

In the offseason, the Dolphins acquired Quinn in a trade with the Rams to bolster the right defensive end position opposite of Wake.

Although Quinn has been inconsistent, he was terrific against the Patriots in September and left tackle Trent Brown had one of his worst games of the season lining up across from him.

Quinn gave Brown problems with his speed off the edge which eventually led to counters on inside rushes later in the game.

Let’s start with the speed rush. The Patriots often teach their offensive linemen to jump set when they run play-action because it allows them to sell the fake while being aggressive out of their stance. The idea of a jump set is to get your hands on the defender as soon as possible, which Brown does here, but Quinn’s explosiveness off the ball causes Brown to get off-balance, and he beats him to the outside before Brown can establish his leverage. Quinn finishes with a rip move and dips his inside shoulder underneath Brown to bend around the edge to get to Brady.

After Quinn established the outside, Brown went to a vertical set to stay in front of his speed rush. One of the issues with a vertical set is that you can kick one step too far to the outside, and it leaves you vulnerable to inside moves. Quinn counters with an inside swim move and gets skinny to squeeze his way between Brown and Thuney. Quinn drops Brady, but Brady made one of his best throws of the season on a tear-drop pass to James White for a touchdown.

There are mixed feelings around the league on Quinn, who was the 14th overall pick in the 2011 draft, but he has given Miami a productive pass rush duo.

In the run game, Quinn’s athleticism and play strength are an underrated aspect of his game.

On this play, the Patriots run an outside zone scheme on a handoff to running back Kenjon Barner. Brown’s job is to kick Quinn outside to open a lane for Barner, but Brown finds himself with his upper body weight too far forward, and Quinn uses that to throw the 380-pound tackle to the ground. This rep is more about pad level and technique, but Quinn is maybe the only defensive lineman to throw Brown to the ground like that this season.

After a 1-2 start, the Patriots beat up on the Dolphins to right the ship in Week 4.

However, everyone in the Patriots locker room is expecting a tougher game this time around, especially with it coming down in Miami.

“Their whole defense is playing well, and it seems like they take on a different persona when they’re at home. It’s a lot harder to play them at home. Their record at home is crazy this year,” said Cannon.

The Dolphins are an impressive 5-1 this season at Hard Rock Stadium, and their pass rush already gave the Patriots problems the first time around.

If the Patriots want to improve their record on the road, they’ll need to take the heat off of Tom Brady.