Lazar: Patriots Game-Plan on Offense With Brian Hoyer at Quarterback vs. Chiefs 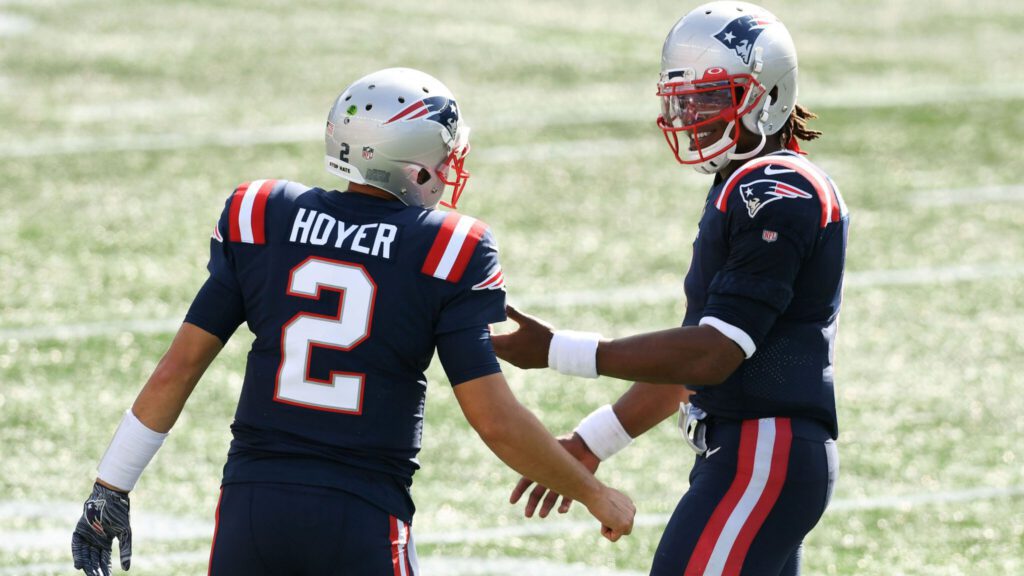 Although nobody will feel bad the Patriots, even their biggest detractors must admit that the league is putting them in a tough spot on Monday night.

New England will travel to Kansas City on Monday morning, then play Patrick Mahomes and the defending champs without star quarterback Cam Newton a few hours after arriving in KC.

Newton tested positive for the coronavirus on Friday and must remain on the COVID-19/reserve list for a minimum of five days and test negative on consecutive days before he can return.

With Newton in quarantine, the Patriots will turn to veteran backup Brian Hoyer against the Chiefs with the possibility looming of more positive tests.

There were times in camp where Hoyer was the most comfortable Pats quarterback in Josh McDaniels’s system. But make no mistake about it, he’s a limited downfield passer.

Hoyer has a quick trigger finger and makes proper decisions with the football. However, his arm talent limits how successfully he can push the ball downfield into closing or tight windows.

McDaniels will need to manage his backup quarterback, and without the threat of Newton’s legs, the fear is that Chiefs defensive coordinator Steve Spagnuolo will return to his 2019 game plan.

Spagnuolo, especially on third down, limited Tom Brady to 169 passing yards by playing Cover-7, which allows the defense to bracket the quarterback’s top threats. Newton might’ve forced Spagnuolo into other coverages by making him pay for playing without a QB spy. But now the Chiefs defense can go back to their successful 2019 plan against the stationary Hoyer.

The odds are long for New England to pull off the upset in Arrowhead Stadium, given their travel circumstances, a whirlwind weekend, and Hoyer starting over Newton. Still, barring a last-minute snag, the game will be played on Monday night.

Here are a few ways that McDaniels and Hoyer can move the football against the Chiefs defense:

Assuming the Patriots offense can stay ahead of the chains, we could see them run the football 40-plus times. In all likelihood, they would’ve done that with Newton too.

The game’s pace will be critical, as a track meet with Mahomes will result in a blowout loss.

McDaniels is one of the best play designers and sequencers in the league when it comes to marrying his run concepts with play-action passes. With play-action, the Pats can create larger throwing windows for Hoyer, so he doesn’t need to thread the needle all the time.

For example, here’s New England’s one-back power concept from Week 4. There’s a play-side double-team that creates an opening for the backside guard to pull as a lead blocker while Rex Burkhead follows rookie Michael Onwenu for a 17-yard gain.

In the 2019 preseason, Hoyer hit tight end Matt LaCosse on a middle-read/seam route off a one-back power simulation. The pulling guard gets the linebacker level to come downhill, opening the passing lane to LaCosse as he splits the safeties. In cover-two the MIKE is responsible for matching a vertical seam route. With play-action pulling the linebacker down, he’s in conflict, and vacates his coverage responsibility long enough for LaCosse to get over the top.

Another possible sequence for McDaniels, made more prevalent by QB coach Jedd Fisch’s background in Sean McVay’s offense, are wide zone runs with play-action off of them.

Here, the Pats are running lead zone with the offensive line stepping towards the sideline and fullback Jakob Johnson as the lead blocker for Sony Michel.

New England also incorporates a single-back wide zone, usually to the weak side of the formation, where they have good numbers thanks to their athleticism at center.

The Pats could avoid doubles on Edelman by running their offense out of heavy personnel packages that force the Chiefs to stack the box instead of dropping seven into coverage.

But early-down success will be critical, or else they’ll get into third-down passing situations where they’ll need to hope that Hoyer is up for the task.

With upgrades at safety and better coaching, the Chiefs pass defense is currently fifth in Football Outsiders’ DVOA metric, but we’d still test their outside corners anyways.

Kansas City’s depth at the position took a few hits already this season, with 2019 sixth-round pick Rashad Fenton starting opposite undrafted cornerback Charvarius Ward. Tyrann Mathieu plays in the slot in their nickel packages where he’ll see a lot of Edelman tonight.

Even though Hoyer doesn’t have Newton’s rocket arm, he throws with decent touch and accuracy within 20 yards. They might not be the 50-yarders we saw from Newton in Seattle, but Hoyer can drop it in the bucket against single coverage to N’Keal Harry or Damiere Byrd.

When the Patriots get into passing situations, spreading the Chiefs defense out, allowing Hoyer to work the best matchup with Edelman likely doubled, will be their best option.

3. Did Somebody Say Wildcat? Not So Crazy…

There’s some sound logic to the Patriots putting either Edelman or even N’Keal Harry in as a wildcat quarterback to run their read-option package that typically features Newton.

The Chiefs defense currently ranks 30th in DVOA against the run, and Lamar Jackson and the Ravens were successful running their power-read concepts against Kansas City last week.

Edelman, the former college quarterback, or Harry, a Newton-like ball carrier, could run the same read-option concepts as another avenue to move the football on the ground.

Although Kansas City prepared for quarterback runs all week, there would be some element of surprise that the Patriots would snap the ball directly to one of their skill players instead.

Don’t be surprised if we see Wildcat – New England edition on Monday night, especially in short-yardage situations where being “plus one” in the box is a huge advantage for the offense.

The Patriots could pull all their tricks (reverses, double passes, flea-flickers) out of the bag tonight. They’ll need them.