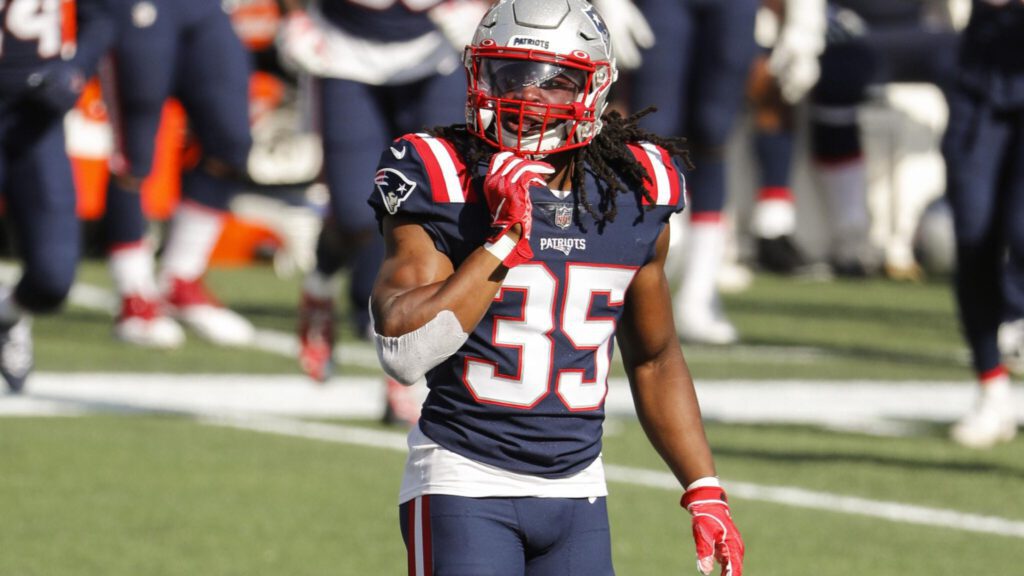 There were only a few instances in the last decade of Patriots head coach Bill Belichick traveling down to Mobile, Alabama for the Senior Bowl to scout top college prospects.

Belichick, of course, was coaching his team in the AFC Championship Game for eight consecutive seasons and was a little too busy to attend the NFL Draft showcase.

However, following the Patriots’ loss to the Titans in the Wild Card round last January, Belichick made the trek along with Director of Player Personnel Nick Caserio to Mobile.

Caserio told the Pats’ football czar about a handful of prospects that were in attendance, but Belichick mainly had his eye on a safety out of Lenoir-Rhyne that dominated the Division II level.

The safety wowed Belichick with his versatility, physicality, play speed, man and zone coverage skills, and a high football IQ that prospects from the DII ranks generally don’t possess right away.

Then, the Lenoir-Rhyne product ran a 4.49-second 40-yard dash at 217 pounds while testing as a top ten athlete at the 2020 NFL Scouting Combine, further solidifying his draft stock.

The 24-year-old has the ninth-best Pro Football Focus grade against the run among safeties with 16 stops this season and is tied for second with 11 stops in the last three weeks.

Dugger has been up and down in coverage. But it’s important to note that he’s learning a new role along with adjusting to life in the NFL during a pandemic.

This interception was nice playing single high again. Hip transition to stay with the post, recovery speed to get back into position to make a play, and track/high-point for the INT. pic.twitter.com/qDFMpHpKKY

In college, Dugger played primarily at free safety in the backend of the secondary, ranging over the top in single-high and split-safety coverages as a ball-hawking machine.

But the Patriots have the rookie playing closer to the line of scrimmage as a strong safety, slot defender, or pseudo linebacker in a similar role to veteran COVID opt-out, Patrick Chung.

Wanted to add this video to the thread of Dugger shutting down tight ends in 1v1s at the Senior Bowl. Probably his fastest way on the field definitively as a rookie. #Patriots

Despite his prowess as a deep zone defender, Belichick saw a physically imposing downhill safety at the Senior Bowl that locked up tight ends during the week of practices in Mobile.

“He played primarily free safety and the deep part of the field [in college]. But, at the Senior Bowl, they did use him in – I think their safeties were pretty much interchangeable. They might have even played right and left, I can’t remember, but you saw him in both positions down there,” the Patriots head coach told CLNS Media this week.

“So, there are some things he hasn’t seen before that are maybe a little new for him, but once he’s seen it and identified it and you’ve explained it to him, he picks it up very quickly. So, I think physically, he has a good skill set to play close to the line or in a deep part of the field – zone to man coverage, blitz, can play in the kicking game.”

“He has a lot of things that you like at that position, and again, he’s a smart, hard-working kid that will enable him to try to maximize all the skills that he has,” Belichick concluded.

Along with freak athleticism and strength, Dugger’s coaches and teammates can’t get over how quickly he is learning the NFL game and the Patriots’ defense, especially given his background.

“I said it back when training camp started; he’s not a guy that, like usually comes from a smaller school, D-II, and you think the biggest challenge for him is gonna be picking things up. He didn’t come in like that at all. I was honestly shocked even in the spring as we were reviewing things, how he was able to pick things up,” captain Devin McCourty said.

Patriots veteran Adrian Phillips was singing Dugger’s praises back in camp as well saying, “the way that he just picked [the Patriots defense] up, and he’s able to talk ball, seeing that in a rookie, you really don’t see that a lot of the time. The only other time I’ve really seen that was with [Chargers All-Pro safety] Derwin James.”

Dugger’s football acumen and attention to detail can be traced back to his college coaches, who knew they had something special in him and pushed the Pats safety to prepare like a pro.

Lenoir-Rhyne’s coaching staff would give Dugger assignments in film study, push him harder in games and practice than his teammates, and had him learn NFL coverages.

All the extra work is paying off for Dugger, and the results are all over his tape this season. Starting back in Week 2 against the Seahawks, Dugger was already making eye-popping plays.

The first “wow” moment for Dugger was on a blitz up the middle where he sent Seahawks running back Travis Homer flying backward and pressured Russell Wilson into an errant throw.

Later on, Dugger played in the box once again, and he went through the center’s combination block to help make the tackle on the ball carrier.

Then, Belichick moved him to deep safety in a cover-two structure. Dugger didn’t overreact to Wilson leaving the pocket and fell underneath a deep crosser from the opposite side of the formation to take away a potential big play downfield. Wilson was flagged for an illegal forward pass.

Although he hit a lull due to injury in the middle of the season, Dugger is back to starring in multiple roles and was a massive part in the Pats’ wins over the Ravens and Cardinals.

In the matchup with reigning MVP Lamar Jackson, Belichick deployed Dugger as an overhang defender in the slot to help set the edge against Baltimore’s potent rushing attack.

On the Ravens’ second play of the game, Baltimore ran a same-side outside toss. Dugger absolutely annihilated tight end Nick Boyle’s lead block to shed and make the stop along with defensive tackle Carl Davis, who was able to run down the line thanks to Dugger’s sturdy edge-set.

Dugger is also responsible for cutbacks or bootleg actions off zone runs when offenses go under center in his edge-setting role.

Here, Dugger patiently stays outside to confirm that Texans quarterback Deshaun Watson isn’t keeping the ball on the bootleg action and then closes in a hurry to finish off the ball carrier with Lawrence Guy.

The Pats safety is still making plays from a traditional off-ball linebacker spot too. Above, the Texans ran an RPO scheme with running back Duke Johnson getting the ball. Dugger stays disciplined as he reads the backside A/B gaps and shoots into the backfield to make the tackle.

The last aspect of Dugger’s role near the line of scrimmage is chasing down ball carriers in the open field, which was a significant weakness for the Patriots defense before his breakout.

In Week 7, former Pats quarterback Jimmy Garoppolo threw for 142 of his 277 passing yards behind the line of scrimmage, with the Pats lacking in sideline-to-sideline pursuit. The 49ers blew-out the Patriots that day 33-6 with Dugger inactive due to an ankle injury.

Last week, the Arizona Cardinals tried a similar motion RPO screen to speedster Andy Isabella, but after Jon Jones beat the tight end’s block, Dugger was there to hold Isabella to a four-yard gain.

With the Cardinals driving later in the game, Dugger made another impressive play in space. This time, Arizona ran a crack toss towards Dugger, who initially false steps to the blockers’ motion and direction, but recovered to make the tackle in the hole to save a touchdown.

The last piece to the puzzle is improving the rookies’ technique in man coverage, where there’s no doubt he has the physical tools for the job, but as we mentioned, is new to the role.

In the win over the Ravens, Dugger was in man coverage against Pro Bowl tight end Mark Andrews several times, who did get the better of Dugger on a few occasions, but the Pats rookie was competitive.

In the loss to the Texans two weeks ago, Dugger was beaten three times by Houston tight ends Jordan Akins and Darren Fells, but those reps are valuable teaching moments for the rookie.

On Akins’s 25-yard reception against Dugger, the Pats safety is flat-footed at the top of the route rather than using a back-pedal or shuffle technique to keep his feet moving for better stickiness through the break. Plus, Dugger’s route anticipation should improve, as he’ll probably make educated guesses in the future based on the formation and alignment of the receiver that Akins will break across the field.

As is the case with any young player, there are still areas of Dugger’s game that can improve. Remember, outside of a week at the Senior Bowl, he barely covered tight ends in college.

Dugger will be locking down tight ends with his size and speed in no time once he’s comfortable with the footwork and mental aspects of playing in man coverage.

Although Dugger isn’t solely responsible for the turnaround, the Patriots’ run defense went from 24th in expected points added against the run to sixth over the last month, which includes matchups with two of the best rushing attacks in the NFL in Baltimore and Arizona.

Plus, New England is only allowing a successful play on 38% of throws behind the line of scrimmage in that span compared to a 64% success rate in the first eight weeks of the season.

Dugger’s play speed, open-field tackling, and physicality to take on blockers and ball carriers add a much-needed boost to New England’s defense against the run and on short passes.

The Pats rookie might not be a traditional linebacker, but Bill Belichick discovered an enforcer in the box that flies to the ball during his trip to the Senior Bowl last January.

Belichick has been searching for a do-it-all thumper that can also play in pass coverage, and by the looks of it, he found his dream safety from a small school in Hickory, North Carolina.