Lazar: Patriots’ Kyle Dugger is Developing into a Complete Player in Pats Secondary 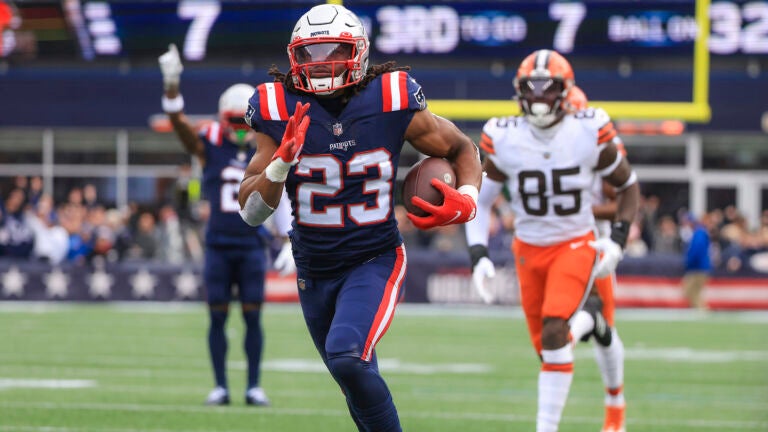 The stories from behind the scenes about Patriots’ second-year safety Kyle Dugger are mythological in nature.

Teammates describe Dugger as this super-athlete who slipped through the cracks to division two Lenior-Ryne and fell into Bill Belichick’s lap in the second round of the 2020 draft.

“That joker is explosive now,” Patriots captain Matthew Slater said. “Devin [McCourty] and I talk about it all the time. I don’t understand how a guy like that ends up playing division two football. That guy is a special, special kid athletically. To be all of 220 [pounds] to run the way he does and go out there and be able to hit.”

During his rookie season, Dugger’s hard-hitting mentality and ability to take on blocks closer to the line of scrimmage against the run popped off the tape consistently.

However, the impact plays against the run were sometimes overshadowed by inconsistent play in coverage, where Dugger finished with a 55.4 PFF coverage grade on 289 coverage snaps.

Dugger is turning into the complete package in his second season with significant improvements in man coverage and excellent click-and-close in his zone coverage assignments.

According to Pro Football Focus, Dugger’s passer rating into his coverage ranks tenth among 63 qualified safeties, and he’s one of 11 safeties in the NFL with at least three interceptions this season.

On Dugger’s improvements, Patriots head coach Bill Belichick said, “I’d put everything down there. He’s a good athlete. He’s a smart kid. He learns a lot. I’m sure he’s learned a lot about everything; keys, matchups, run force, pass coverage, blitzing. He soaks it all in.”

In last week’s win over the Falcons, Dugger took standout rookie tight end Kyle Pitts in coverage on ten plays and allowed only one catch on three targets for 18 yards with a pass breakup.

On Atlanta’s first third down, the Falcons tried to go to Pitts on a slant against Dugger. Although he initially whiffs on his jam, Dugger plays the slant route perfectly from out of phase by driving on the catch point to break the pass up on a smooth-looking recovery.

Later on, Dugger landed a physical jam on Pitts at the line of scrimmage that stalled Pitts’ release upfield. With Pitts held up at the line, Matt Ryan’s pass sails to nobody, and Devin McCourty runs underneath it for an interception.

“Just patience. Not being too aggressive and using the tools that I have, physicality at the line of scrimmage,” Dugger told CLNS Media of his biggest improvements in man coverage. “Just patience and seeing things, using my leverage, trusting my help. Things like that have been big for me.”

Along with his improvements in man coverage, the Patriots’ shift to more zone coverage schemes in recent weeks allows Dugger to see the quarterback and fly to the ball. 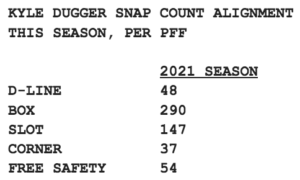 Looking at Dugger’s alignment snap counts, the 2020 second-round pick is lining up everywhere in the Patriots’ defense and at all three levels.

Here, the Patriots bait Browns quarterback Baker Mayfield into an interception by rotating from a cover-one look pre-snap to a cover-two zone after the snap. Dugger, the seam/hook defender in cover-two, reads the quarterback and jumps Cleveland tight end David Njoku’s route for an interception.

In this play, the Patriots are in cover-three against play-action. Ryan wants to throw to Pitts on the crosser over the middle, but Pats linebacker Ja’Whaun Bentley takes it away, forcing Ryan to dump the ball off where Dugger (top of screen) brings down wide receiver Russell Gage for a one-yard gain.

Along with making positive strides in coverage, Dugger is still a force against the run, leading the team with 17 run stops, which is also one off the lead among safeties this season.

Although it took Dugger time to develop in a new role closer to the line of scrimmage, the Patriots’ safety is rounding out his game and starting to make impact plays in coverage.

Score another one against the “Belichick can’t draft” crowd.