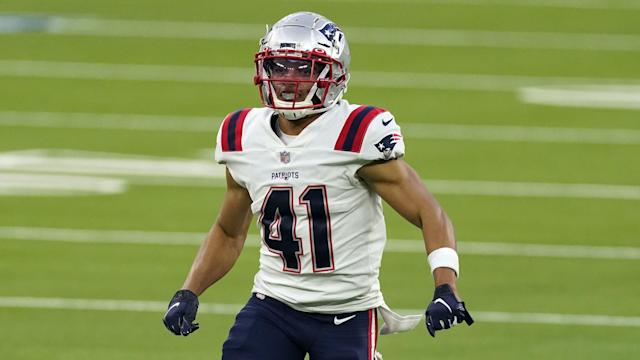 The Patriots’ secondary lost a major contributor last month that changed the complexion of their secondary.

With Jones in the lineup in the first six weeks, the Patriots played the third-highest percentage of passing plays in man coverage (58%). In the last four games without Jones, that number has dropped to 31% man coverage in primary zone-heavy game plans.

One of the main reasons for the switch is Jones’s replacement in the slot, Myles Bryant, is taking on a much larger role and is at his best in zone coverage.

“Jon [Jones] is a big loss for us. Obviously, Myles [Bryant] has taken a lot of snaps there,” Patriots head coach Bill Belichick said last week.

Playing under defensive coordinator Jimmy Lake at the University of Washington, Bryant played both nickel corner and safety in a coverage system that resembled New England’s versatility: man, zone, mostly single-high safety, but some two-high safety as well.

Still, we’ve seen Bryant’s prowess in zone coverage over the last few weeks with the Pats’ shift, and his versatility to play multiple spots in the defense stands out.

Starting with his primary role in the game plan recently, the Patriots have played a league-high 40 drop-backs in cover-three zone structures over the last two games.

In that coverage, Bryant, who starts over the slot, will drop into the curl/flat window along the sideline underneath the outside corner playing the deep-third zone.

Here, the Panthers try to flood the deep third by sending two vertical stems upfield to the quarterbacks left. With Bryant dropping into the curl/flat zone, he passes off the seam route to outside corner Jalen Mills and falls underneath the deep out along the sideline to force an incompletion.

At times, we’ll also see Bryant as a middle hook defender in cover-three, but the Pats are mostly having him drop to the sideline from over the slot as a man-zone disguise before the snap.

Another primary coverage call for the Patriots nowadays is cover-two, which they play to keep offenses off-balance on early-downs and occasionally on third-and-short situations.

Bryant will play as the seam-hook defender over the slot. His primary responsibility is to drop with any inside vertical route and read the quarterback to react to underneath throws.

In this play, Bryant plays a cat-and-mouse game with Chargers quarterback Justin Herbert. Earlier, he blitzed from the slot, so he dances around as he might add into the rush. By disguising pressure, Bryant gets Herbert to throw “hot” over the middle to Keenan Allen, and Bryant flashes his click-and-close in zone to break up the pass.

Along with his coverage ability, Bryant flashed his open-field tackling from both man and zone coverage against the Panthers last week. 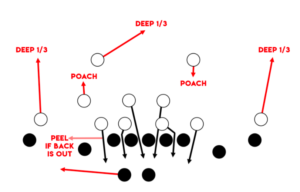 Here is a unique coverage scheme that the Patriots played in Sunday’s win called a “hot” coverage: a three-deep, two-under zone blitz scheme.

In the scheme, Bryant’s job as a “poach” defender is to stay in the passing lane for the seam route if the quarterback looks in his direction and react to any throws underneath. The opposite “poach” defender, J.C. Jackson, rallies back to the middle of the field when Darnold’s eyes go away from him. Once Darnold commits to throwing the shallow crosser to Moore, Bryant is free to break on the ball and lay the wood, which he does with authority here.

Without Bryant’s read-and-react skills there, that could’ve been a much bigger play for Carolina.

Lastly, the Patriots will always play some man coverage on the backend as long as Belichick runs the defense, and Bryant has a few different roles in those man schemes.

Here, his primary responsibility is to play man coverage on D.J. Moore out of the slot. By playing at different levels than Mills on the outside, the Pats avoid the pick play for Moore’s slot fade. With Bryant staying over the top of Moore’s route, Darnold works the check-down against man coverage on Robby Anderson’s shallow crosser. Bryant peels off Moore and comes down to make the open-field tackle to stop Anderson.

Along with playing in man coverage, the Pats will also use Bryant as a blitzer from man looks.

In this play, the Pats use a backend rotation to send Bryant into the rush. Devin McCourty comes down to replace Bryant in man coverage, Adrian Phillips rotates back to play post safety and Bryant blitzes. The post-snap movement causes Herbert to hold the ball, giving Bryant time to get home on the blitz and force a throwaway.

The Patriots have a long-standing history of discovering defensive back talent in undrafted free agency and developing those players into key contributors in their defense.

Big names include current top corner J.C. Jackson, Jonathan Jones, Malcolm Butler, and now Bryant is the latest to follow the same developmental path as others before him in New England.

“All of that’s up to them,” Belichick said about the UDFA success in the secondary. “Whatever those guys accomplish, they earn. We just try to coach them. They got opportunities, and guys who earn roster spots, earn playing time, earn it. It’s not anything we can just give away.”

Although the Pats miss one of their defensive leaders in Jones, Bryant is filling in just fine.