Lazar: Patriots’ Passing Offense Has Gone From Bad to Worst in the NFL 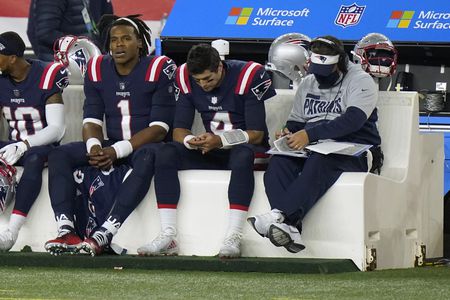 The Patriots’ passing attack is arguably the worst unit in the entire NFL, which isn’t surprising for those that are following along all season.

Over the last six weeks, those numbers got even worse, with the Patriots plummeting to dead-last in expected points added per drop-back (-0.164) since Week 11. Newton is also the least efficient passer in that span when the team should be improving late in the year.

Again, those numbers aren’t shocking if you watch the Patriots every week, but they put into perspective how dire things truly are for New England in the most important aspect of the game.

Passing the football has never been easier, and the teams that are pacing the league in that department are among the favorites to win the Super Bowl. According to Football Outsiders, the top six teams in pass DVOA are the Packers, Chiefs, Titans, Buccaneers, Bills, and Seahawks. All those teams will be playing in January and have Super Bowl aspirations.

Whether it’s quarterback play, receiver play, or a combination of both, the Patriots are running an elementary passing offense because they have to with this personnel.

On film, all the metrics are backed up by how offensive coordinator Josh McDaniels designs plays and shines a bright light on how limited New England is through the air.

Here’s a perfect example of how the Patriots’ issues are sometimes a combination of quarterback and receivers on the first third down of the game on Monday night. The main problem with this play is that N’Keal Harry’s seam route is too slow to threaten the defense, and the linebackers in short zones don’t carry him upfield. The two underneath defenders stay in the dig window while being close enough to Meyers’s route to stop him short of the sticks. The Pats also need to give Newton a half-field read to simplify things. By Week 16, you’d like to be able stress the entire secondary. Still, Newton makes the right decision to take the yards with Meyers to set up a field goal, which is also the only open option.

Presenting Newton with more half-field reads isn’t a one-time thing for the Patriots either; it’s something they’re forced to do every week due to their limitations at quarterback and receiver.

On the second third down of the game, the Patriots trot out a three-by-one formation with the backside receiver running a shallow crosser into the strength of the formation. Again, all of Newton’s options are one side of the field. This time, the Bills bring a blitz, and Newton holds the ball in the pocket, waiting for his deeper routes to develop rather than checking it down immediately to Byrd to beat the blitz, who has some space to catch and run for a first down.

When the Pats turned to second-year quarterback Jarrett Stidham in the second half, things didn’t improve. Although they spread the field more, Stidham is turnover-prone and unimaginative.

Stidham didn’t throw an interception in 11 attempts on Monday night, but his career interception rate of 8.3 on 48 career attempts is alarming.

Some of the 2019 fourth-round picks’ interceptions are due to poor ball placement, but many are due to his failures in understanding leverage. Sometimes we get too caught up in quarterbacks reading coverage rotations, and many throws nowadays are leverage-based reads.

The concept of leverage-based reads is not new, and in it’s simplest form, means the quarterback will watch the defender he’s throwing at to see if he’s positioned inside or outside of the receiver.

Here, Bills cornerback Levi Wallace is sitting on an in-breaking route from Jakobi Meyers the entire way. He has a slight inside shade and breaks on the route before Meyers even cuts at the top. Before the snap, a more nuanced passer would’ve seen that Byrd’s route at the top of the screen has more favorable leverage. Instead, Stidham throws to an out-leveraged Meyers and is lucky Wallace didn’t pick it off.

Along with failing to make leverage-based reads, Stidham also struggled on Monday night with seeing the field, manipulating coverage to create throwing lanes, and was trigger shy at times.

In this play, Stidham takes an early check-down to James White in the flat when a bigger play to Damiere Byrd’s dig route was available if he moves Bills linebacker Matt Milano out of the passing lane.

On the ensuing drive, Stidham had another third-down where he leaves a clean pocket and then passes up a big play downfield to Jakobi Meyers because he won’t let it rip.

For both Pats quarterbacks, a better supporting cast would undoubtedly lead to better results.

Still, it’s hard to ignore the training wheels that McDaniels puts on the passing offense with Newton under center, while Stidham makes too many mistakes to justify more playing time.

Although Newton’s work ethic and leadership are commendable, and Stidham is in a difficult stage of his development, neither offers any hope as long-term solutions at the position.

Another element of the loss to Buffalo that caught my eye was the team getting some playing time for second-year defensive back Joejuan Williams, who is buried on the depth chart.

Williams only played one snap in the first 36 minutes of Monday night’s game, but 27 after, and when I asked Belichick about the 2019 second-round pick on Wednesday, here’s what he said:

“Joejuan’s role will be determined by Joejuan, just like it is with every player. He’s shown the ability to do some things both inside and outside. It’s a position overall that we have pretty good depth. So, it’s overall a very competitive group of players. But, he’s certainly held his own in there and shown that he has a solid role for our team. Whether that role increases or decreases will really be determined by him and his performance.”

Williams isn’t putting out a level of performance on the practice field to earn more playing time, and Belichick addressed overcoming a loaded depth chart, but his tape was better than expected last week.

Most of Williams’s snaps this season are inside the formation where his 6-foot-4, 211-pound frame is a good matchup against tight ends or bigger slot receivers.

Here, Williams is in man coverage with Bills tight end Dawson Knox. Knox runs an intermediate crosser, and Williams is in a good position to take it away, forcing Josh Allen to throw a prayer up the sideline with the safety rotating over the top of Gabriel Davis.

Once the score got out of hand, the Patriots moved Williams to outside corner, his position in college at Vanderbilt, to give him some game experience on the boundary.

In this play, Williams is playing in press-man and has good technique. He gets hands on the receiver to redirect the Bills’ wideout, gets in-phase with his back to the quarterback, and decelerates to stay with the comeback route.

Although he had a few mental lapses earlier in the season, there were no egregious errors on tape this week, and Williams was relatively sticky in coverage outside of one slip on the turf.

Belichick’s history of drafting defensive backs in the second round is spotty, and Williams’s lack of playing time is trending towards the “bust” category, but the door could open next season.

With Stephon Gilmore (pre-free agency) and Jason McCourty’s (retirement) uncertain futures, an opportunity could come knocking for Willians as the Pats’ depth in the secondary thins out.