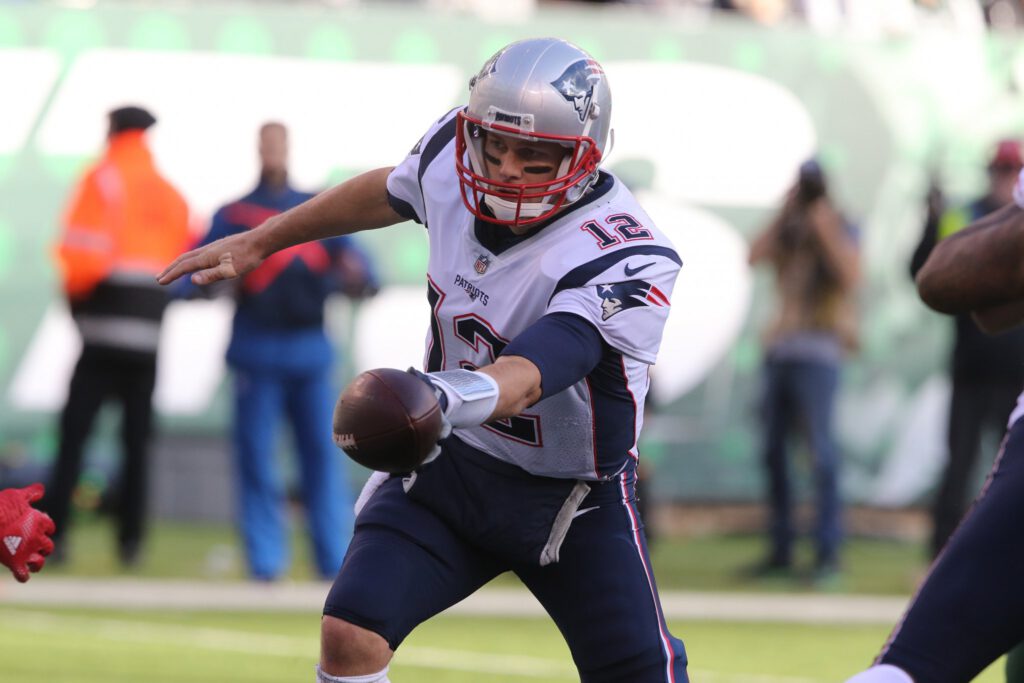 FOXBOROUGH — As the Patriots prepare for their showdown with the Minnesota Vikings this week, it’s clear that both Bill Belichick and Mike Zimmer are apart of a mutual admiration society.

“I think that Coach [Mike] Zimmer’s done, as usual, a tremendous job with his team,” Belichick said at his Wednesday press conference. “Defensively, this is, I’d say, as good of coaching as we’ll face.”

For the Vikings head coach, he too heaped praise on Belichick, but notably raved about the Patriots’ play-action passing game.

“They’re the best play-action team in the NFL,” said Zimmer. “A lot of teams run play-actions that they don’t really run the runs out of, but their play-actions look exactly like their runs. The offensive line does an outstanding job, Brady’s really good with the play-actions, and the receivers do a good job of getting to the spots where the linebackers or the safeties are getting sucked in to.”

After the win against the Jets, Belichick seemed delighted with his team’s performance in that area, crediting offensive coordinator Josh McDaniels and others for their success.

“All of those plays look the same. The runs and the passes look the same as far as the block and backfield action, so Josh [McDaniels] and the offensive staff did a great job on some of the play designs and complementary actions that work together,” he said.

Over the last two games, Brady has been on fire on play-action passes completing nearly 91 percent of his throws with a 113.3 passer rating.

This week, the play-action pass will likely be a significant part of the Patriots’ game plan due to Minnesota’s struggles defending play fakes this season.

For comparison, their 82.3 passer rating against non-play action passes is second-best in the NFL, according to Pro Football Focus.

There are many reasons why the Vikings defense struggles against play-action, but the main issues stem from the impact they have on the Minnesota pass rush and how it takes advantage of their aggressive style of play.

Slowing down a Minnesota pass rush that ranks seventh in pressure percentage (40.2 percent) this season will be crucial for the Patriots on Sunday.

Below, we’ll go through the tape of some of the play-action schemes that have worked against the Vikings defense and a few Patriots-specific designs that have been successful for New England this year:

In recent seasons, the Patriots, and many other teams added a jet fake as apart of their standard play-action designs and also adopted many of the air-raid concepts to then attack the defense downfield.

One of those air-raid designs is the Yankee concept which has become prevalent around the league but especially with the Patriots, Rams, 49ers, and Chiefs.

Back in September, 49ers quarterback Jimmy Garoppolo averaged nearly 12 yards per attempt on play-action passes, and the Niners used the Yankee concept among other designs to attack Zimmer’s defense.

Here, you’ll see Garoppolo execute the play/jet-action with the offensive line and running back selling the fake and the dummy orbit motion causing more chaos. The Vikings, as they often do, play cover-3 spot drop zone in the secondary. The jet fake sucks in the backside linebacker and Niners tight end George Kittle runs across the field on an intermediate crosser. The receiver at the bottom of the screen takes the boundary corner on a post route which clears out the sideline and Kittle has room to run after the catch. End result: 36-yard gain.

Last week against the Jets, the Patriots ran their variation of the same concept for a chunk play to wide receiver Chris Hogan.

Another staple of the Patriots play-action playbook is the slip screen to the running back off of the same play/jet-fake motion.

Rams running back Todd Gurley went for 65 yards on a screen that looks identical to the Patriots’ scheme which often features James White. The Rams flow the defense away from Gurley with the dummy fly sweep and a crosser by the receiver to Jared Goff’s left, and it leaves the sideline vacated for Gurley who makes Minnesota linebacker Eric Kendricks miss in the open field to tack on extra yardage.

There are numerous examples of the Patriots using this scheme, but here’s White picking up a first down against the Bills on the design back in Week 8.

Now that we’ve established that play-action can be successful against Minnesota, let’s look at what makes the Patriots so good at running these schemes.

In the intro, both Belichick and Vikings head coach Mike Zimmer lauded at the Patriots’ ability to sell the run both with player execution and design to make things look the same.

“I think any time that you can make one thing look like something else, that creates a conflict on the defensive side of the ball, so those are all positives. If you can make a run look like a pass or vice versa, that’s certainly something that’s productive and can be useful for you,” said Patriots offensive coordinator Josh McDaniels.

“I think you’ve got to always look to try to help yourselves as best you can by not giving away whatever it is you’re trying to run, and if that means we can marry some things together, then certainly we’re going to try to do that.”

Last week, McDaniels introduced a new formation that proved to be effective against the Jets defense.

With this new look, Pats do-it-all weapon Cordarrelle Patterson lines up behind tight end Rob Gronkowski as an up back. This confuses the Jets defense. They have to communicate pre-snap how they are treating Patterson; is he a backfield player or a receiver? If he’s a backfield player, it’s the linebackers’ responsibility to account for Patterson. If he’s a receiver, then it’s on the defensive backs to cover him.

The Patriots ran this new formation four times, two runs and two play-action passes, and averaged over nine yards per play on those plays.

First, let’s look at one of the two running plays. White gains four yards on the carry, but even though the Pats end up accepting a penalty on the defense instead, the precedent has been set: they’ll run or pass out of this formation.

Here’s the play. The Patriots run a simple gap scheme with a double-team on the play side and left guard Joe Thuney pulls to account for the free defender. Pay close attention to how the blocking appears to the defense.

Now, the Patriots marry that blocking scheme with a play-action pass sending Gronk on a crosser over the middle that gains 15 yards. The Jets defense is scrambling to figure out their coverage assignments before the snap. Jets linebacker Avery Williamson (#54) is fooled by the fake, which opens the passing lane, and fellow linebacker Darron Lee false steps likely because he’s unsure of his coverage assignment. Also, notice Patterson’s alignment. He’s just a smidge further inside than before, which doesn’t seem like much, but could alter how the defense accounts for him.

The Patriots offense struggled on the whole against Tennessee, but they were still successful in the play-action passing game.

On this play, you see the Patriots’ ability to sell the run at its best. First, the Patriots make this look like a power running blocking scheme with a double-team on the interior and fullback James Develin leading through the hole. Develin and running back Cordarrelle Patterson continue the fake by coming through the line of scrimmage as they would on a running play. All of those indicators tell the defense this is a run, but Brady holds onto the ball to hit Edelman on the crosser for a massive gain.

Here’s an example of the Patriots running the same power scheme, but this time they do hand it off to running back Sony Michel.

As a defensive player, the Patriots’ play-action passes give you false reads and make it nearly impossible to be in the right position to defend the pass.

After a slow start to the season, the Vikings defense is once again playing at an extremely high level.

Minnesota is now up to sixth in Football Outsiders’ DVOA metric (Defense-adjusted value over average) and finds itself in the top ten in scoring defense after 12 weeks (tenth, 22.4 PPG).

And as Belichick put it at his Wednesday press conference, Zimmer will alter his defense to find the best way to defend his opponent.

But all season long, opponents have successfully moved the ball using the play-action pass against the Vikings defense, and its a strength of the Patriots offense.

The Patriots will have their hands full on Sunday with a talented Minnesota team in all three phases of the game, but Brady and the offense should be able to find some openings if they continue their high-level of execution in the play-action passing game.