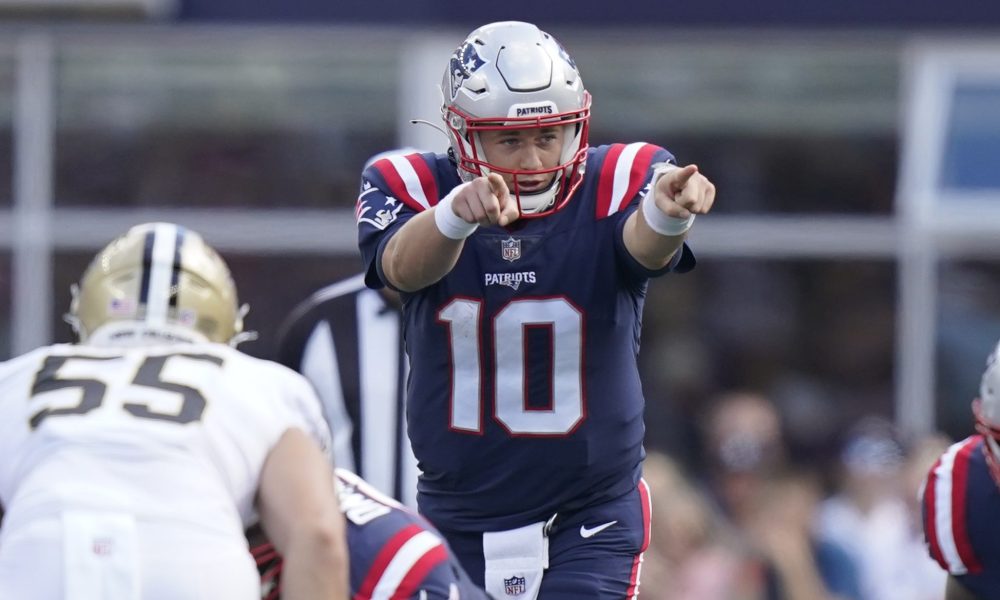 The book is out on how to defend Patriots rookie Mac Jones early in his NFL career.

With a first-year quarterback and several new pieces in New England’s offense, opposing defenses are blitzing Jones at an extremely high rate, and the strategy, so far, is working.

In the first three weeks, Jones is facing a blitz on 34.1% of his drop-backs, which is tied for the second-highest mark among quarterbacks who have started every game for their team (first – Dak Prescott, 34.7%). 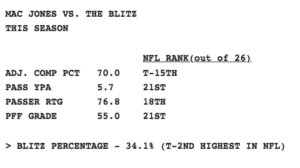 “That’s part of certain people’s strategies, especially versus younger quarterbacks,” Patriots quarterback Mac Jones told CLNS Media. “Watch the tape and see what they’ve done and try and react. It goes back to doing what I’m supposed to do if they bring this blitz, and I’m supposed to throw this pass, and that’s kind of what it comes down to, so it’s not over-complicating it.”

Naturally, Jones’s statistical struggles against the blitz aren’t all on the young quarterback. The Pats are allowing a 46.8 pressure rate when the opponent blitzes, which is 22nd in the NFL.

Furthermore, New England’s receivers have two drops of on-target passes as some of the issues are related to receiver error when the defense dials up the pressure.

For example, Patriots head coach Bill Belichick spoke about a play against the Saints during his weekly appearance on The Greg Hill Show on WEEI in Boston earlier this week.

New Orleans sends a zero blitz with both inside linebackers blitzing at the snap, forgoing a deep safety in the middle of the field. Jones had the right idea to buy time and attack downfield to an open Nelson Agholor. However, the Pats’ rookie QB and newly signed wide receiver weren’t on the same page when Agholor heads towards the corner, and Mac throws the post.

“The receiver and the quarterback just saw it a little bit differently. Those are the kind of plays you’re working on leverage, and obviously need to see it the same way. Missed a good opportunity there,” Belichick said.

Not seeing things the same way is a theme at every level of New England’s offense in the first three weeks of the season.

Here’s another missed opportunity on the first third down in Sunday’s loss to the Saints. This time, New Orleans ran a replacement pressure, where safety Malcolm Jenkins blitzes up the middle and edge rusher Demario Davis takes running back James White in coverage. White has a step on Davis on a similar wheel route that Jones hit in Week 1 against Miami. However, left guard Mike Onwenu fails to see Jenkins blitzing and Davis dropping. Instead of taking the nose tackle as center David Andrews picks up Jenkins, Onwenu goes to block the defensive end, thinking Wynn has to block Davis. Onwenu and Wynn end up blocking the same rusher, allowing Tanoh Kpassagnon to come through the line unblocked, and the immediate pressure alters the throw.

“Seeing it through the same set of eyes is something that’s been written on the walls in our meeting room well before I got here – and working together breeds it,” offensive line coach Carmen Bricillo told CLNS Media on Tuesday.

The Pats are having protection issues, miscommunications between quarterback and receiver, and now they’ll face Todd Bowles’s Buccaneers defense that leads the league in blitz rate.

According to Pro Football Reference, Tampa Bay has dialed up 61 blitzes so far this season, leading the NFL by a wide margin. New England’s opponent in Week 1, the Miami Dolphins, are second with 49 blitzes in the first three weeks.

“They bring some secondary players, and when they get into their base defense, it’s a lot of five-man pressure with their edge guys who are very good, so if you want to call those blitzes, then they blitz quite a bit in that formation when they’re in that group. But when they get to their nickel group, they mix it in there. They play a variety of zones. Mix in a little man. Mix in a little pressure, and they keep you honest, so he does a good job of that,” head coach Bill Belichick said.

As Belichick alluded to in his breakdown of Todd Bowles’s blitz package, the Bucs bring more five-man pressures than all-out blitzes.

Still, Bowles’s go-top pressure design will likely cause the Patriots problems based on their issues picking up second-level blitzers who then work in a stunt with the defensive line.

In last season’s NFC Championship Game, the Bucs sacked Aaron Rodgers by sending linebacker Lavonte David into the rush and wrapping him around penetrators Jason Pierre-Paul and William Gholston.

Then, Bowles took it up a notch in the Super Bowl against Patrick Mahomes with a fire zone where the Bucs blitz the outside corner and take KC by surprise.

The Patriots’ offense will need to get on the same page in a hurry as they face Bowles’s Bucs defense this Sunday at Gillette Stadium.

Plus, they’ll likely need to do it without receiving back James White, who suffered a hip subluxation injury last week in the loss to New Orleans.

White was a quick outlet for Jones against the blitz and a reliable blocker in blitz pickup. Without White, New England turned to veteran Brandon Bolden. Bolden was solid in pass protection but didn’t give the offense much as a receiver. Other backfield options, such as fullback Jakob Johnson (one hurry) and lead back Damien Harris (sack allowed), didn’t hold up well.

Patriots offensive coordinator Josh McDaniels could have one trick up his sleeve that we haven’t seen much yet: tight end Jonnu Smith working out of the backfield.

McDaniels could turn to a 02 personnel package in passing situations. Yes, three wide receivers and two tight ends, with no running back on the field, thanks to Smith’s versatility.

If there was ever a week to unveil some new formations, facing Tom Brady and the defending champs is that week.