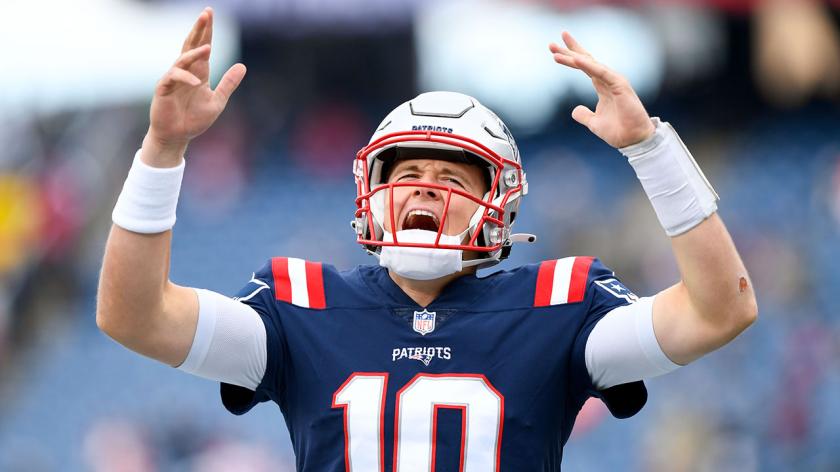 The Patriots’ offense has gone through the expected growing pains with a rookie quarterback, but Josh McDaniels’s group is again rising to the top.

After a 45-point explosion against the Browns on Sunday, New England’s offense is executing game-plan wrinkles and core concepts alike as a finely tuned machine.

Although rookie quarterback Mac Jones’s performance is the headliner, the other pieces fit onto McDaniels’s chessboard the way the team envisioned in the offseason.

Arguably the biggest development is the Patriots’ offensive line finding itself during their four-game winning streak, capped off by the return of right tackle Trent Brown in Week 10.

In a matchup against one of the league’s premier defensive fronts, the Pats had an 81.8 pass-blocking win rate, best in the NFL in Week 10, and ran for 92 yards before contact.

Along with the offensive line rounding into form, Bill Belichick’s offseason additions are filling the voids that made them Patriots targets in the draft and free agency in the first place.

And it still feels like there’s another level for Jones’s supporting cast if the Patriots can get Jonnu Smith and Nelson Agohlor going down the stretch.

Then, there’s the quarterback. Jones isn’t just out-performing the rest of the 2021 draft class; he’s out-performed the vast majority of starting quarterbacks over the last seven games. 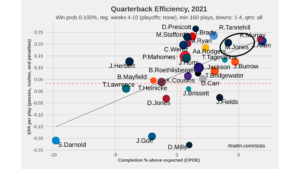 Jones isn’t just good for a rookie. He’s arguably a top-ten quarterback in the NFL, with 11 big-time throws in that span, which ties him with Mahomes, Dak, and Lamar in “wow” passes.

In Sunday’s win, the Pats’ first-rounder had his best performance of the season, with a +16.2 CPOE (best by a rookie this season), 7-for-9 on third downs, an EPA per drop-back that ranks in the 96th percentile (0.6), and three big-time throws against a legit pass defense.

Plus, Jones’s average time to throw without screens (2.39s) coupled with his average depth of target on those throws (10.9 yards) shows how quickly he was processing the defense.

Jones is leading the Patriots’ offense like an elite quarterback in year one with his supporting cast rounding it form. Here are five throws from Sunday’s win that prove his elite status:

As we mentioned, the Pats were terrific on third down (7-for-9), taking advantage of the 23rd-ranked third-down defense entering Week 10.

“Mac Jones, in particular, but their offense played really well. We could not get them off on third down,” Browns head coach Kevin Stefanski said following the game.

In the Patriots’ first third-down attempt on their opening drive, Jones picks up late movement by the Browns secondary before the snap to read a two-high zone structure. Mac works to Henry on the Y option series, where the Pats’ tight end will break off leverage to find a void in the zone. As Henry begins to open away from the zone-dropping linebacker, Mac begins his throwing motion as Henry settles in the cover-two hole.

Jones was proficient at reading the defense and working the correct read against the coverage, while his post-snap manipulation is also fantastic.

Here, Henry’s short motion gives Mac a pre-snap indicator that it’s man coverage. Once the ball is snapped, he sees the safeties rotate into a one-robber scheme and throws off the “rat” defender. Jones moves the safety in the robber role with his eyes, staring down the outside dig route by Nelson Agholor to influence the safety in that direction, then throws Bourne open on the other side of the rat defender to move the chains.

The Patriots’ young quarterback also does an excellent job of using the information presented to him by McDaniels with pre-snap motion as a guide of where to go with the ball. 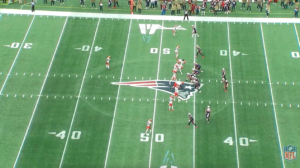 This time, the Browns are showing a man-blitz before the snap with the mug alignment. When Henry goes in motion and isn’t followed by a defender, that’s an indicator to Jones that Cleveland will likely bail out of the pressure and play zone coverage instead.

As we roll the play, Mac is mostly correct, as Cleveland’s linebackers drop into coverage with the slot corner coming on a blitz. Jones immediately goes to his matchup, Jakobi Meyers working the vertical route from a tight split. Meyers beats Browns’ rookie corner, Greg Newsome, at the line, and Jones drops the dime.

The biggest area of growth from Jones as the year has progressed is his willingness to attack tight windows downfield, something that his detractors doubted he’ll ever do at the NFL level.

Jones attacks a tight window that he probably wouldn’t have thrown earlier in the season on his touchdown pass to Kendrick Bourne.

New England sets it up with a three-receiver combination against a post-safety structure. Nelson Agholor’s backside glance route hopefully holds the deep safety in the middle of the field. Jones sees Bourne winning on the seam pattern and throws a rocket between the two closing DBs that allows Bourne to high-point the ball for six.

The tight-window throws continued for the Patriots’ rookie in the second half as well.

In this play, the Pats motion Henry to form a 3×1 formation and clear out the sideline with two vertical routes from the number one and two receivers. Jones sees Henry working a corner route against an out-leveraged linebacker, an excellent matchup for the Pats, and puts the ball up for Henry to go and get it along the sideline.

The Patriots knew they were getting a highly intelligent quarterback prospect with good downfield accuracy when they selected Mac Jones 15th overall in April’s draft.

As you can see, all of those traits have carried over to the pro level, and with each passing week, Jones’ confidence grows, as does his willingness to push the ball downfield.

Now ten games into his rookie season, it’s safe to say that the Patriots have a franchise quarterback.

Although the coaches want to play it close to the vest, the Patriots are sticking with their zone coverage formula with 70% zone against the Browns.

Patriots safety Kyle Dugger’s interception was a perfect example of the rotating and disguising the Pats are doing to confuse quarterbacks into mistakes.

In the play, the Pats show cover-one robber with the DBs aligning in man coverage techniques and safety Adrian Phillips giving the allusion that he’s in the robber role. The Pats rotate into a cover-two shell at the snap, but Baker Mayfield thinks he has tight end David Njoku out-leveraging Kyle Duger on an out-breaking route. Instead, Dugger and Jalen Mills drop into low zones and jump Njoku’s route, with Dugger coming away with the interception.

The Belichick’s are using their man tendencies to their advantage by showing man coverage pre-snap, then rotating into zone structures, and it has opposing quarterbacks’ heads spinning.

After a shaky start on the Browns’ opening drive, the Patriots made some key adjustments in their run defense to neutralize Cleveland’s dangerous rushing attack.

The Pats tried to use run stunts to get penetrators into the backfield on the opening drive, with the second-level defenders taking on the pullers. The execution wasn’t great, and it left their DBs (J.C. Jackson here) to press the fullback kicking out the edge. Plus, they played it out of nickel, with safety Adrian Phillips in the box in a linebacker role.

Once the Browns exposed those run fits, Belichick adjusted by playing more base defense with Dont’a Hightower and Ja’Whaun Bentley both off the ball. Then, the Pats threw out the stunt schemes, going downhill at the pullers with edge defenders (Judon above) handling edge-setting responsibilities.

Patriots second-rounder Christian Barmore continues to perform at a high level, making it known that Mac Jones isn’t the only Pats rookie from Alabama that can ball.

Christian Barmore upper-body power is crazy. Look at him bench press the right tackle here and build a wall. Causes Johnson to run right into the back of Blake Hance. #Patriots pic.twitter.com/ojZ2HNvygJ

Barmore recorded another five hurries as a pass rusher and made some terrific plays against the run as well by flashing his upper-body power at the point of attack.

With Jones, Barmore, and Stevenson leading the way, the Patriots have a terrific rookie class.