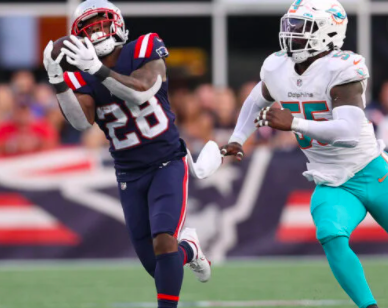 The Patriots’ run of successful pass-catching running backs is unprecedented, and James White’s place in that legacy is well established.

White, a three-time Super Bowl champion and a major contributor in two of those title runs, is resume padding at this point of his career.

The eight-year veteran played through an absolute tragedy last season when his late father was killed in a car crash that also put his mother in critical condition. Luckily, White’s mom, Lisa, survived the accident.

Despite his father’s passing, and his mother’s battle with grief and her own health, White continued to suit up for the Patriots in 2020.

As one would expect with everything going on off the field, the Pats’ running back’s production wasn’t up to its usual standards.

White’s 49 catches and 375 receiving yards were his lowest since the 2015 season, and he had by far his worst season in blitz pickup, allowing a career-high ten quarterback pressures.

“Last year definitely wasn’t my best year in any aspect, so definitely a lot of improvement, especially with the blitz pickup,” White told reporters before Week 1.

“Just being more physical, using your technique. It’s nothing major. Just all about the will to get it done, and just gotta block the guy in front of you and allow the quarterback to get the ball off.”

Although White was his own harshest critic, longtime running backs coach Ivan Fears didn’t see a drop off in White’s game a year ago.

According to Fears, New England’s offense with Cam Newton at quarterback didn’t utilize White to his fullest potential.

“I never thought he dropped off. I think last year we couldn’t take advantage of him. New scheme. Young. The way we were doing things,” Fears said. “This guy (Mac) has the chance to take advantage of James. It’ll be a good thing for James. Utilize the things that he does well.”

In the Patriots’ season-opener against the Miami Dolphins, rookie quarterback Mac Jones took advantage of White in the passing game.

White had a complete game, hauling in six catches for 49 yards, including a 26-yard grab, the Pats’ longest play through the air. Plus, he didn’t allow a quarterback pressure in six pass-blocking snaps.

On the 26-yard dime from Jones, the Pats’ rookie quarterback took advantage of White’s matchup on linebacker Jerome Baker. White sells a release into the flat, then breaks upfield on a wheel route and catches a perfectly thrown over the shoulder ball.

Expecting the Pats’ new quarterback-receiving back duo to connect in the passing game is one thing, but White’s stellar performance in blitz pickup was the icing on the cake.

Fears agreed with the assessment of White’s blocking by saying, “he didn’t really miss any. He was definitely on top of his game as far as that goes. He was there when he needed to be there. He made his blocks.”

“People are trying to come after him because they think he’s 200-pounds or whatever he is. They don’t think of him as a big back. They think they can — these 330-pound linebackers can run through him. James is also a tough guy,” Fears continued.

“He can be pretty tough in there, and that’s what he’s got to do for us. He’s got to do it consistently, and he knows it. People will start coming after him.”

One of the reasons why the Patriots are reluctant to trust young running backs in the passing game is the complexities in pass protection.

The Pats run a dual-read system with their backs in blitz pickup, meaning they’re tasked with reading multiple defenders at once and deciphering who is the biggest threat to the quarterback.

Here, Jones moves the MIKE point to no. 49, making the offensive line responsible for the four players on the line of scrimmage. White is going to read inside out, from the inside backers to the slot. When those inside backers drop into coverage, White gets his eyes outside to see if there’s an incoming blitzer and is in position to pick up the slot blitz. Jones then rips a big-gainer up the seam to Nelson Agholor.

In this play, the Dolphins show a zero blitz. White is responsible for the backside threats, and again, reads it inside-out. White blocks the rushing linebacker through the B Gap when both defenders blitz, the rusher with the shortest path to Jones. That gives Mac time to get the ball out and move the chains on third down.

From Faulk to Woodhead to Vereen, and now White, the Patriots’ receiving back lineage is as good as any team in NFL history.

White, who looks as good as ever in his eighth season, might be the best of them all.

The Patriots now have a quarterback in Mac Jones who has a quick release and makes sound pre-snap reads to hunt matchups.

The stage is set for another big year for James White.