Lazar: Patriots Rookie OL Michael Onwenu is a Stud in the Making 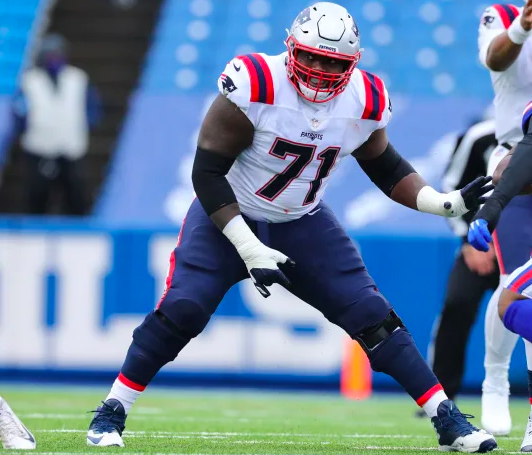 Belichick gave Scarnecchia a ring to get his impression of a 380-pound guard from Michigan that caught the eye of current offensive line coaches Carmen Bricillo and Cole Popovich.

Scar then did Belichick another solid by attending the 2020 NFL Combine, eventually giving his seal of approval on New England’s future sixth-round pick, Michael Onwenu.

Onwenu didn’t meet privately with Scarnecchia, but Scar gave the thumbs up after studying his tape, and the 2020 sixth-round pick immediately became a consensus draft target in the organization.

“I know they liked him, and I liked him, too. So it was nice to see him get drafted by the team. That was a great choice. It’s worked out good. He’s a really good player,” Scarnecchia said via the Boston Herald’s Karen Guregian.

The Patriots’ track record of finding talent along the offensive line speaks for itself; all five starters along one of the league’s elite offensive lines were either drafted or undrafted signings by New England.

The newest member took a similar path as other Patriots success stories as a sixth-round pick after starting three seasons for the Wolverines, mostly at right guard.

In Week 1, Onwenu had a breakout performance splitting duties at right tackle and serving as a sixth offensive lineman in certain packages, but we don’t crown rookies after only one game.

After seven games, we don’t crown players either, but it’s hard to ignore that Onwenu is grading out as one of the top offensive linemen in the NFL and keeps getting better; we now have a large enough sample size to say the Patriots found a baller.

The Pats rookie has the fourth-highest Pro Football Focus grade among all offensive linemen, not just rookies, with an elite 90.6 overall grade and a 91.3 run-blocking grade (third-best among OL).

Onwenu has lined up at both guard spots and right tackle, showing tremendous versatility and has only allowed one sack and six quarterback pressures in 203 pass-blocking snaps, per PFF.

“Mike’s a hard-working kid. He takes coaching well. Whatever you ask him to do, he tries very hard to do it and is a real smart kid that can correct mistakes and pick things up the second time around,” Patriots head coach Bill Belichick told CLNS Media this week.

“Mike’s not only a good player in terms of having position flexibility and the intelligence to handle different positions and different assignments and be on a different side of the ball, but his fundamentals and techniques are very good,” Belichick continued.

“He’s a good football player, and he’s shown the versatility to play two different spots, guard and tackle – which, in this league, as a rookie, different sides of the line, it’s really been impressive.”

Onwenu’s play strength was eye-catching watching him at Michigan, and that has translated immediately to the pro level as one the NFL’s most powerful run-blockers.

Here, the Pats ran their crack toss scheme with wide receiver Gunner Olsezweki getting two himself as Onwenu pulled in front as a lead blocker from his right tackle position. Onwenu makes contact with the “first color” in his sights, Bills linebacker A.J. Klein, blocking Klein into teammate Tremaine Edmunds. Both Buffalo linebacker’s go down with one Onwenu-sized jolt.

“During the film session, all the guys cheered me on,” Onwenu said of the block on Thursday. “That was a good feeling. To be honest, I didn’t even know that happened until I watched it, but I’m glad.”

The Patriots will also use Onwenu as a puller on either power or counter plays when he’s at guard. New England ran one-back power here, and he kicks the MIKE out of the hole before finishing him off by table-topping the Chiefs linebacker over Ryan Izzo.

Along with lead or pull blocks, Onwenu makes his presence felt on combination blocks, forming a formidable tandem with right guard Shaq Mason, another elite run-blocker.

In this play, the Patriots ran a power-read with Cam Newton in a pistol formation. Onwenu’s job is to execute a double-team block with Mason to the play side while the backside guard, Joe Thuney, pulls to the MIKE linebacker. Onwenu and Mason drive the Buffalo defensive lineman out of the point of attack, and when Mason comes off the combo block to work to the second level, Onwenu finishes no. 91 Ed Oliver into the ground.

On Onwenu’s climbs to the second level, he punishes smaller linebackers and defensive backs, adding to his stack of pancakes.

In Week 1, the Pats used Onwenu as an extra run-blocker at tight end (next to left tackle). Onwenu introduced himself to old friend Elandon Roberts after popping the defender on the line of scrimmage then climbing to an off-balance Roberts who ended up on the ground.

Onwenu got another pancake a few weeks later on a combo block that showed excellent post-snap processing to put himself through to the second level immediately.

This time, the Patriots ran power once again, but the defensive line slants away from Onwenu looking to get on another combination block, so the rookie puts himself through to the linebacker level climbing to and finishing Chiefs safety Daniel Sorensen.

In all these clips, Onwenu’s versatility to play multiple spots along the line is on full display, something that the Pats rookie never envisioned when the Patriots drafted him.

On playing all over the offensive line, Onwenu said, “I definitely didn’t think it was a possibility, besides playing left or right guard. But, honestly, I’m open to anything that comes my way. I’m grateful for that opportunity.”

But is it difficult for such a young player to master blocks and techniques playing so many positions?

“It’s not that difficult,” he said. “Whether I’m at guard or tackle, it’s kind of doing the same thing, just maybe a little bit different. Just remembering the fine detail.”

Although all evaluators expected Onwenu’s run-blocking prowess to show up on Sundays, his success as a pass-blocker is more surprising.

Onwenu doesn’t necessarily have quick feet, but his steps are efficient. He also leans on his immense size and strength even in pass protection. Like most gigantic lineman, Onwenu usually sets back and forces pass-rushers to go through him to the quarterback since not many guys will overpower him.

Here, the Raiders ran a T/E stunt. The Pats rookie passes off the penetrator to left tackle Isaiah Wynn and then recovers to the looper showing excellent foot speed and hand placement.

Along with stunts, teams are also trying to confuse the rookie with different blitzes, but he’s learning quickly and picking up those rushers.

In this play, the Bills put four defenders over three blockers on the right side. With safety Jordan Poyer and linebacker Matt Milano over the tight end, Onwenu needs to make a quick post-snap read. Milano takes Ryan Izzo in man coverage with Poyer blitzing off the edge. Onwenu reads it out perfectly, eclipsing Poyer, making his block look easy at right tackle.

Later in the game, Buffalo tried to confuse Onwenu again. This time, they blitz Klein from off the ball with Trent Murphy rushing off the edge. Onwenu initially looks to engage Klein, but it clicks in that he has Burkhead in blitz pick-up behind him, so he redirects towards Murphy and runs the Buffalo pass-rusher past the quarterback in the pocket.

Here’s a more traditional pass set where Onwenu uses great hand usage to keep Shaq Lawson off his chest and footwork to run the rusher past the quarterback once again at right tackle.

Onwenu also held up well against power rushers at guard. In the play above, he shows off his sturdy anchor and hand strength giving up no ground to the Chiefs’ Derrick Nnadi.

The Patriots’ recent draft record has led to plenty of criticism of Belichick’s ability to build his roster through the easiest avenue of team building.

Although the Pats have missed in other areas, evaluating the offensive line continues to be a strength, and it looks like they found another diamond in the rough with Onwenu.

As the sample size continues to grow, Onwenu’s play improves, leading to the realization that the Patriots have a stud in the making at either guard or tackle.