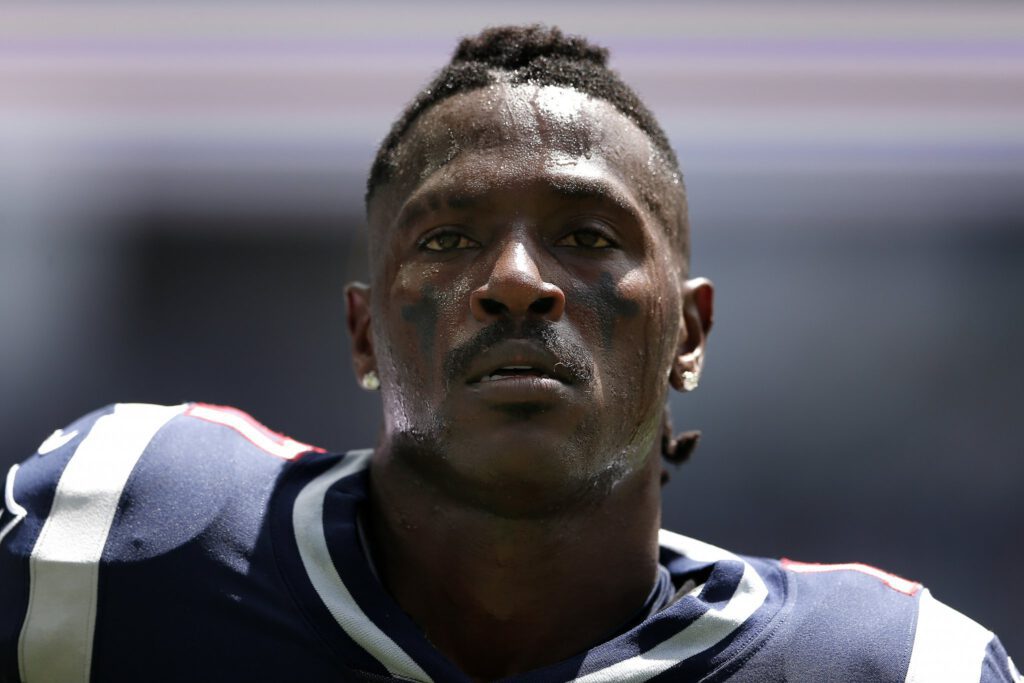 FOXBORO — The Antonio Brown saga in New England is finally over as the team announced they’re releasing the star wide receiver after 11 days as a Patriot.

In the building, Brown was buying into the “Patriot Way” working diligently on the field and in the classroom. But off the field, it was an absolute mess.

Days after signing in New England, the seven-time Pro Bowler was accused of sexual assault and rape by his former trainer, Britney Taylor.

Then, Sports Illustrated’s Robert Klemko revealed that Brown made unwanted sexual advances towards another woman in 2017.

On Thursday, Klemko reported that Brown’s accuser received what she characterized as intimidating text messages and a lawyer for the woman sent a letter to the NFL with screenshots of those messages. The letter said the former Patriots wide receiver, “has engaged in conduct intimidating and threatening to our client, in violation of the NFL personal conduct policy.”

During his Friday morning press conference, Patriots head coach Bill Belichick refused to answer questions on Brown saying, “We take all the situations with our team seriously, and there are some things that we’re looking into, but I’m not going to have any comment on any of the off-the-field situations.”

And now as of Friday at 5 p.m. Antonio Brown is no longer a member of the New England Patriots.

Before you start to worry about the Patriots offense, don’t, they still have plenty of firepower to chase a seventh Lombardi Trophy.

There’s a sense of relief on all sides of this story that Brown is no longer on New England’s roster, and everyone is truly better off this way.

Tom Brady and Josh McDaniels will revert to the original plan with Phillip Dorsett and eventually first-round pick N’Keal Harry alongside Julian Edelman and Josh Gordon.

And undrafted rookies Jakobi Meyers and Gunner Olszewski could be factors as well in certain situations.

Dorsett will now return to his Week 1 role where he played 84 percent of the snaps hauling in all four of his targets for 95 yards and two touchdowns.

Since Week 5 of last season, Brady and Dorsett have connected on 22 consecutive passes in the regular season for a near-perfect 154.0 passer rating on those throws.

Dorsett’s expected points added success rate since the beginning of 2018 is second only to Saints Pro Bowler Michael Thomas. And Brady’s 24.9 adjusted net-yards per attempt on throws to Dorsett this season is the second-highest mark in the NFL through two weeks.

When given the opportunity, Dorsett catches every pass thrown his way and continues to make tremendous strides as a route runner.

“Phil does a very good job of changing up his mannerisms and using his body to influence defensive backs,” Patriots wide receivers coach Joe Judge told me on Friday. “He’s technical about everything he does. He loves going over the one-on-one film with you and what you see in practice whether it’s against our defensive backs or how opponents DBs play and applying what he sees on tape to what he can do better in that matchup.”

Dorsett would’ve likely taken a back seat to Antonio Brown leading to fewer snaps for a potential breakout star, but now the former first-round pick will get his chance.

Along with Dorsett, the Patriots can also lean on a focused and presumably clean Josh Gordon.

Gordon is in a good place mentally and said he feels at home at the Patriots facility. He also spoke about his growing knowledge of the Patriots playbook and how comfortable he feels in the system in year two of his Patriots career.

Since he debuted with New England last season, Gordon has racked up chunk plays at an extremely high rate, ranking fourth in adjusted net-yards per attempt in that span.

For those that don’t know, adjusted net-yards per attempt is an efficiency metric that puts a heavier emphasis on big plays and fewer turnovers. Although Brady has only completed 58.4 percent of his passes to Gordon, the Pats wideout is a big-play machine.

Dorsett gives them a consistent chain-mover and speed dimension while Gordon creates big plays with his rare combination of size and speed.

Finally, we can’t forget about 2019 top-pick N’Keal Harry, who is at the Patriots facility daily, rehabbing his injuries and taking part in team meetings.

Harry’s career is off to a turbulent start when it comes to health, and he has a long way to go as a route runner, but he can still make an impact once he returns.

Before the Patriots signed Antonio Brown, the wide receiver position was a strength. And they also have two of the league’s best pass-catching running backs in James White and Rex Burkhead.

And we didn’t even mention a stellar Patriots defense that hasn’t allowed a touchdown since the fourth quarter of last January’s AFC Championship Game.

New England will be fine without Brown, and quite frankly, might be better off without the constant distraction of a great player that has lost his way.

The Patriots, as they should be, are still heavy favorites to win Super Bowl 54.