Lazar: Patriots Will Miss David Andrews, But Are in Good Hands With Ted Karras 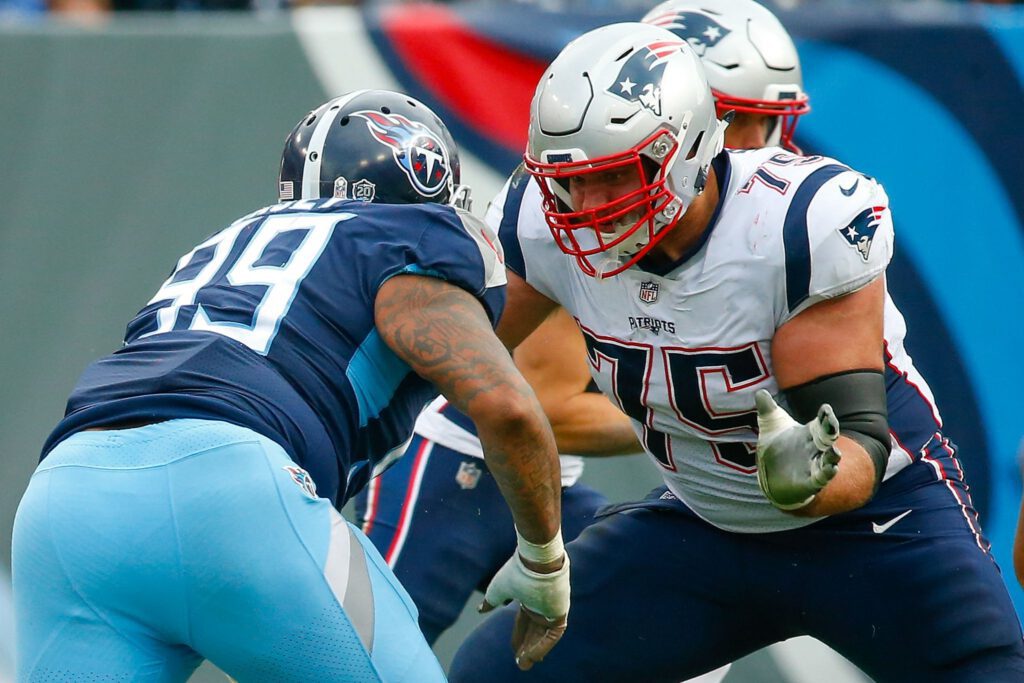 FOXBORO — the unexpected loss of center David Andrews puts the Patriots in an unfortunate spot 11 days before the season opener.

Over the last three seasons, Andrews started 55 of the Patriots’ 57 games as the anchor in the middle of the offensive line, including three consecutive Super Bowls.

The best-case scenario for the Pats captain is a three-to-six month recovery from blood clots, meaning his 2019 season is very much in jeopardy.

“He’s the quarterback of the OL,” starting right guard Shaq Mason said of his linemate.

Along with his skills as a blocker, Andrews’s role as the quarterback of the offensive line is vital to New England’s success.

As the center, Andrews, with the help of quarterback Tom Brady, gets the offensive line in order so that they can pick up whatever rush plan the defense sends their direction.

With the Patriots and most NFL teams, the play call will tell the offensive line the pass protection plan.

Here’s an example of a play call in the Pats’ playbook: zero near open zing 62 Y cafe raft.

In that sequence, “62” is the protection call that tells the offensive line what to do.

However, things can change once the offense gets to the line of scrimmage.

The protection call can also change if the quarterback audibles to an entirely new play at the line of scrimmage, and if the offense goes no-huddle, the Patriots will use a one-word play-call, and the center needs to know the protection scheme.

Andrews’s replacement will now work with Brady to get everyone pointed in the right direction, and then they have to snap the football and execute their blocks.

The likely replacement for the Pats center will be fourth-year pro Ted Karras, a 2016 sixth-round pick of the Patriots that has started five games in his first three seasons.

Karras, one of the best quotes in the Pats locker room, knows he has big shoes to fill, and that it all starts with the QB-center exchange both before and during the snap.

“It’s been part of my role here going on four seasons now to be ready to do that [make protection calls],” Karras told CLNSMedia.com. “Whatever role I take on that’s a coaching decision, and I’m just trying to help the team win.”

“From day one, I think my first day was May 5, 2016, they teach us the offense, and I’ve really tried to learn it, and I still find things that I need to learn and improve on every day.”

Back in 2017, Karras made two starts at center when Andrews missed two games due to illness.

In those two games, Karras allowed three quarterback disruptions and only blew one block in the running game with 22 designed runs into his gap, according to Sports Info Solutions.

(blown block: any time a blocker does not successfully block the defender they attempt to engage with and, as a result, gives the defender an opportunity to negatively affect the play)

The tape on Karras during those two games, and in two starts last season, makes me optimistic about his ability to replace Andrews.

Let’s start with pass protection where Karras received a starter-level grade of 76.6 from Pro Football Focus in his two starts in 2017.

Here’s a pass set early in the first quarter against the Oakland Raiders in Mexico City. The Patriots are in an empty formation, and Karras is blocking a one-technique defensive tackle in an even front. Based on the front, Karras knows he has help from left guard Joe Thuney. He sets to keep his inside leverage with his helmet inside the defender and lands a strong two-handed punch to the chest to stop the defenders’ initial progress. The defender tries to cross his face, but Karras moves his feet and landing another punch to take the defender out of the play.

Later on, Karras is in a one-on-one situation with the defense in an odd front. The Patriots run play-action, so Karras sets aggressively with a hard punch and vertical set. The defender tries to come downhill at Karras, and he anchors comfortably to give Brady time to make a throw.

Karras also handled passing off defensive line games well. On this play, All-Pro pass rusher Khalil Mack runs an inside stunt with a head-up nose tackle on the center. Mack slants inside while the nose tackle wraps around the penetration by the Pro Bowler. Karras sees the rush by Mack and uses his help from Mason to wall off the now Chicago Bears superstar.

Here’s a similar action where Karras picks up a slanting Mack to keep Brady clean.

Karras is a clean pass setter, but everyone can improve, and for him, that starts with keeping sturdy edges by maintaining his leverage.

Last season, Karras allowed a sack to then Packers defensive tackle Mike Daniels filling in for Mason at right guard.

On the play, Karras stepped too aggressively, giving up his inside edge, maybe expecting help from Andrews. Daniels saw Karras leave the door open, and used a swim move to jump inside and sack Brady.

We’ll see how Karras does with his responsibilities before the snap, but he was a reliable pass protector when called upon as a pro.

In the running game, Karras can get the job done as well with sound body positioning.

Here’s another excellent block by Karras, this time at the line of scrimmage. The Patriots ran a pin-pull scheme where Karras is going to pin the one-technique DT while Mason pulls to the play side on a toss. Former Pats running back Dion Lewis sees the defense overcommit to the play side and cuts the run back with Karras sustaining his block.

Lastly, the Patriots ran a tight end “wham” scheme here. Shaq Mason lets the three-technique through for Dwayne Allen to block at the line of scrimmage. The exchange between Mason and Allen, with Mason going across to block the opposite A-Gap, let’s Karras climb immediately to the second level. Karras finds the linebacker and finishes his block with a little nasty.

The loss of David Andrews was felt both on and off the field by the Patriots.

On a human level, we are all praying for Andrews as he battles a scary bought with blood clots.

On the field, the Patriots will miss his leadership and knowledge of the system but are in good hands with Ted Karras.

Karras has three-plus years under offensive line coach Dante Scarnnecia that prepared him for the opportunity to start in the NFL, and he should fill in admirably.

As for the depth behind Karras, everyone that follows me knows that I’m a massive fan of rookie Hjalte Froholdt aka the Danish Destroyer.

Froholdt is an intriguing prospect with tackle-like traits for an interior offensive lineman but based on my conversation with Scarnecchia, and the tape, he has a long way to go.

“He’s a bright kid, and he understands a lot of things,” Scarnecchia told me. “What we are trying to do with him is to get him to be more disciplined in the things he does and less wild in the things he does, and he has four holding penalties in three games, and that’s unacceptable. There are habits that we have to fix and techniques we have to get better with him. He is working hard and trying his best to do it right. We are pleased with his development, but we have a ways to go.”

For the time being, the Patriots will rely on the veteran Karras to fill the giant void left behind by Andrews.