Lazar: Plenty of Reasons to Believe That Patriots QB Mac Jones Will Continue to Improve 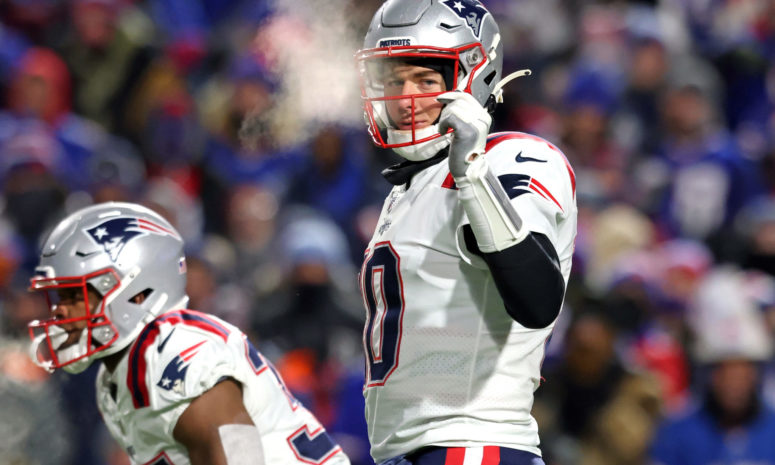 Every rookie thrust into a major role in his first NFL season has their ups and downs, and Patriots quarterback Mac Jones wasn’t an exception to the rule.

Although Jones hit a rookie wall down the stretch, he essentially ran the equivalent of a quarterback gauntlet. Mac won the starting job at Alabama, started 13 games for the Crimson Tide, including two College Football Playoff games, went through the pre-draft circuit, and was in the building in Foxborough starting immediately in early May for rookie minicamp.

From there, Jones won a quarterback competition over the summer by beating out incumbent starter Cam Newton and started the second-most games ever for a rookie quarterback (18).

Since 1950, only four quarterbacks started 18 games or more in their first NFL seasons, and Joe Flacco’s run to the AFC title game marks the only QB to start more games than Jones (19).

The Patriots’ quarterback doesn’t need excuses for what was still an impressive rookie campaign. Still, a long journey, which included learning one of the most complex offenses in football, is necessary context in any discussion about how Mac Jones’s season ended. 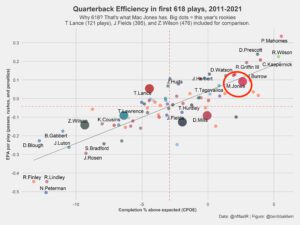 Even with a rocky finish, Jones was still one of the most prolific rookie passers we’ve seen over the last decade, putting up efficiency numbers on par with the best first-seasons in that span.

#Patriots QB Mac Jones's final ranks for the regular season (out of 31 QBs):

Furthermore, Jones was no worse than a top 16 quarterback by the metrics we should use to evaluate QB play, meaning he was already an above-average starter in year one.

And the Pats’ quarterback did that with zero career Pro Bowlers or 1,000-yard receivers among his arsenal of weapons and after losing top receiving back James White in Week 3.

The most important aspect of evaluating a rookie quarterback is, were there enough flashes to believe that player could keep elevating his game with more consistency and help around him?

With Jones, his consistency in an extremely complex system was at times remarkable, putting him ahead of most rookies in terms of knowing what you’ll get every week.

Plus, the positive signs came in droves from elements to Jones’s game that we expected based on our pre-draft evaluation of the Pats’ quarterback and even unexpected add ons.

Starting with the expected, Jones’s post-snap processing to diagnose defense’s coverages was apparent from the very first start he made in the NFL against the Miami Dolphins.

Here, former Dolphins head coach Brian Flores dials up an “exotic” for Mac on third down. The pre-snap look signals to the quarterback that the man-heavy Dolphins are in cover-one. But the safety to Jones’s right rotates at the snap, and Miami forms a cover-two structure. Jones gets his eyes to the branch concept (slot out, outside fade), pump fakes to the “branch” route to get the flat defender to jump Kendrick Bourne and then dots a back-shoulder throw to Nelson Agholor in the cover-two hole along the sideline.

Jones’s mental acumen to process NFL coverages and operate within structure continued throughout the season, as he operated Josh McDaniels’s system at a high level.

In our favorite sequence of the season from Jones, McDaniels dials up the same concept three times against the Colts defense in Week 15. The route concept is called “levels,” where the Pats will stress zone defenders with short and intermediate dig routes.

With the defense altering its structure slightly each time, Jones completes first-down throws to both dig routes based on the movement of the MIKE linebacker in the first two plays, then hits the explosive downfield to N’Keal Harry when the safeties jump the “levels” side.

As the season wore on, we saw Jones’s confidence from the pocket to attack downfield with aggressive decisions improve.

In Week 18, the Pats flooded Miami’s zone defense by releasing three receivers away from the passing strength. The concept is snag-corner, with the running back (flat) and strong-side receiver (curl) occupying the two zone defenders to that side of the formation. Jones recognizes Xavien Howard (bottom of screen/outside corner) jumping Kendrick Bourne’s curl route, and knows there’s nobody behind Howard to take Hunter Henry on the deep corner pattern, so he lets it rip to his tight end.

Along with the expected, thriving within structure and quick mental processing, Jones doesn’t get enough credit for making plays on the move.

Most draft analysts, myself included, questioned if Jones had the physical tools to extend the down and make things happen on second-reaction plays, which are all the craze right now.

The main reason why Jones fell in the draft was that he didn’t have elite arm talent or mobility to win later in the down when the scheme couldn’t carry him. In other words, the plays we see Patrick Mahomes or Josh Allen make that everyone loses their minds over.

Regardless of your opinion on the validity of that thought process, the reality in today’s NFL is that every evaluator wants a quarterback who can make magic happen, which is why Lawrence, Wilson, Lance, and Fields went ahead of Mac in the 2021 first round.

Even in the Pats’ blowout loss to the Bills in the postseason, Jones was escaping a sack attempt by veteran pass-rusher Jerry Hughes and finding Hunter Henry for a 30-yard gain.

In the Week 16 loss to Buffalo, the Pats went for a fourth-and-short and tried to run a pick play to Brandon Bolden out of the backfield with Jones rolling out. The Bills shut the play down, but Mac converted by keeping the play alive and finding Jakobi Meyers.

Although Jones doesn’t have elite physical gifts, a la Mahomes or Allen, he certainly did more with his legs and on second-reaction plays than anyone expected.

As is the case with any player, Jones isn’t a perfect quarterback, and working with a QB coach in the offseason to maximize his throwing velocity is on the docket, I’m told (this isn’t big breaking news. Every quarterback works with mechanics coaches in the offseason).

Since Jones doesn’t have an arm cannon, he needs to generate that extra zip on his throws by throwing from a solid platform and getting that extra zip from his hips and shoulders. Along with sharpening his mechanics, the Pats’ strength and conditioning staff will continue to help Mac get physically stronger.

Former NFL quarterback Kurt Warner recently also pointed out something about Jones’s game that is arguably a bigger developmental step than adding velocity.

Warner said that Jones needs to “slow down” on his reads and stop trying to go at warp speed all the time to make fewer mistakes.

We saw this come up on Jones’s pick-six against the Dolphins in Week 18. Before the ball is snapped, Xavien Howard lines up with an open stance at the line of scrimmage rather than square, which Jones takes as a tell that he’s bailing at the line of scrimmage. Instead, Howard jams #1, sits in the flat with eyes on #2 and jumps Meyers’ route. If Mac takes an extra half-beat to confirm Howard’s zone drop, he likely saves seven points.

Here’s another example from earlier in the season where Mac cuts a corner with his reads.

In this play, the Pats ran a four verts-style concept out of 22-personnel play-action to take a vertical shot against a single-high zone. Mac looks off the deep safety from Jonnu Smith’s seam route but doesn’t account for the backside corner, A.J. Terrell, who is reading him the whole way. If Jones takes a quick look at Smith before releasing the ball, he’ll see that Terrell came off the deep-third to jump the Pats’ tight end’s route and maybe progresses to a wide-open N’Keal Harry on the boundary or checks it down to the back underneath.

Earlier, we highlighted plays where Jones’s quick mental processing helped him immensely, but sometimes it can be a blessing and a curse for the Patriots’ quarterback.

On the Terrell interception, Jones also throws off his back foot, and the ball hangs a little, which speaks to the improvements he’ll need to make in that area as well.

The reviews from Mac Jones’s rookie season should be overwhelmingly positive, and although it wasn’t all perfect, he put enough good tape out there to make you a believer.

As he tries to take the next step in year two, improving in the areas we highlighted while his overall comfort level in the system and with being an NFL quarterback improves is a good starting point. There are probably many other things we don’t know about that Mac wants to improve on, too.

Based on what we’ve seen so far, it’s foolish to think he won’t keep getting better.