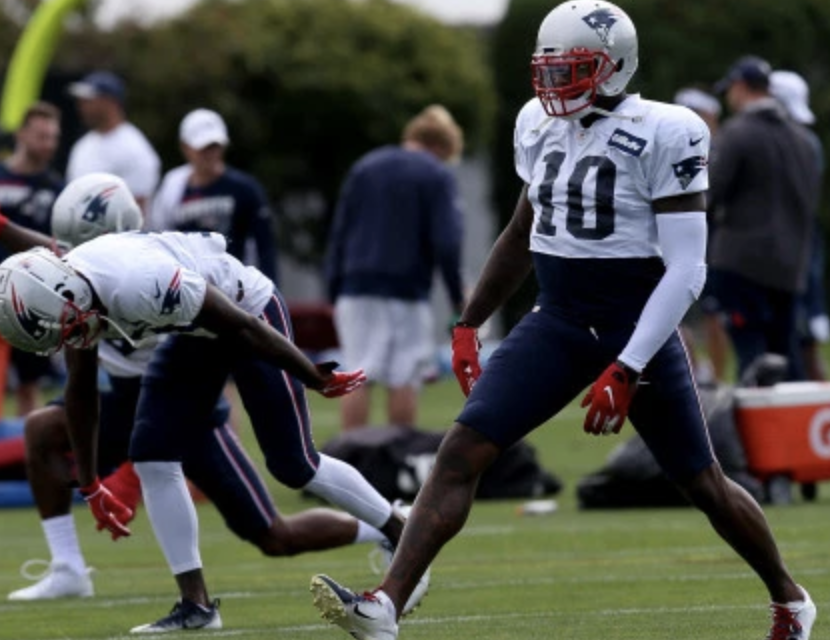 FOXBORO — The Patriots made another series of roster moves at the wide receiver position releasing Maurice Harris and activating Josh Gordon off the non-football injury list on Sunday.

The release of Harris, a standout in minicamp and the early part of training camp, is not a major surprise after he suffered a lower leg injury during joint practices with the Titans.

But once upon a time, I wrote that Harris could be a useful role player in New England’s offense.

Less than a month ago, Harris was running with the starters, then Jakobi Meyers passed him on the depth chart, and Josh Gordon and Demaryius Thomas returned ahead of schedule.

Harris’s release puts into perspective how quickly things can change in the NFL, and how little the early stages of the summer matter in the evaluation process.

Harris was waived with an injury designation, meaning he could revert to New England’s injured reserve if he clears waivers and could make another run at the roster next season.

With Harris’s release and Gordon’s return, let’s reset a complicated wide receiver depth chart less than a week away from roster cuts.

Here’s how I view the position as we enter the final week of the preseason (excludes special teamer Matthew Slater):

And here are some notes on Demaryius Thomas and other players still battling for a roster spot:

Thomas – the Patriots activated the former Pro Bowler off the PUP list last Wednesday as he completes a speedy recovery from a torn Achilles. Although Thomas is not the player he once was, I believe that he can still contribute to an NFL team. The question is how much, and if his roster spot is worth it over younger players that will contribute as returners? Ideally, rookies N’Keal Harry and Jakobi Meyers will continue their upward trajectory and emerge as contributors. In Harry’s case, if the first-rounder is healthy, he should see the field over Thomas. The situation with Harry reminds me of Sony Michel a year ago; the Patriots invested heavily in Harry, and he needs snaps to continue his development. It’s debatable whether or not Thomas is worth keeping only as Gordon/Harry insurance.

Berrios – the second-year wideout was back at practice on Sunday after missing Thursday’s game against the Panthers. There are concerns about Berrios’s ability to separate against starting-caliber corners, but he has improved this summer and is more explosive in his routes. Berrios also offers an NFL-ready punt returner and potential kick returner as well. Partially due to injuries, he saw more time this summer with Tom Brady, but as a receiver, he reminds me more of Austin Carr than Danny Amendola or Julian Edelman. Carr is now a borderline NFL player. With that said, you never know how a player can develop.

Olszewski – based on how he looked a few weeks ago, I never thought we’d seriously be having a conversation about Olszewski on the initial 53. To his credit, the D2 standout is making a late push, mostly as a returner. Gunner is a little more explosive as a punt returner than Berrios, but he has a long way to go before he’s an NFL caliber receiver. This season, Olszewski would make the team solely as a return man, but there’s value in that. The Patriots would benefit from taking some of those reps off of Julian Edelman’s plate.

Before we deliver a verdict, one quick note about the usage of four-wide receiver sets across the NFL.

Many, including myself, have theorized that the Patriots might explore formations with four wide receivers due to their depleted tight end group.

According to Sports Info Solutions, the Pittsburgh Steelers led the NFL in drop-backs with four wide receivers on the field with 63 for the entire regular season, that’s a shade under four per game. The Patriots only had 18 such snaps a year ago, and the NFL average was 17.

Unless the Patriots go completely outside the box, they’ll only go four-wide a few snaps per game at most.

Based on what we know, the Patriots will likely go with six wide receivers on the initial 53-man roster.

The idea of carrying an extra wide receiver assumes that the team will only go with two tight ends.

If that’s the case, my guess is that the following six players will make the roster: Julian Edelman, N’Keal Harry, Josh Gordon, Phillip Dorsett, Demaryius Thomas and Jakobi Meyers.

However, if Thomas doesn’t show the team something in the ten days he has to work with before roster cuts, a healthy Berrios would be my next man up.