Lazar: Seven Things to Watch For at Patriots Minicamp This week 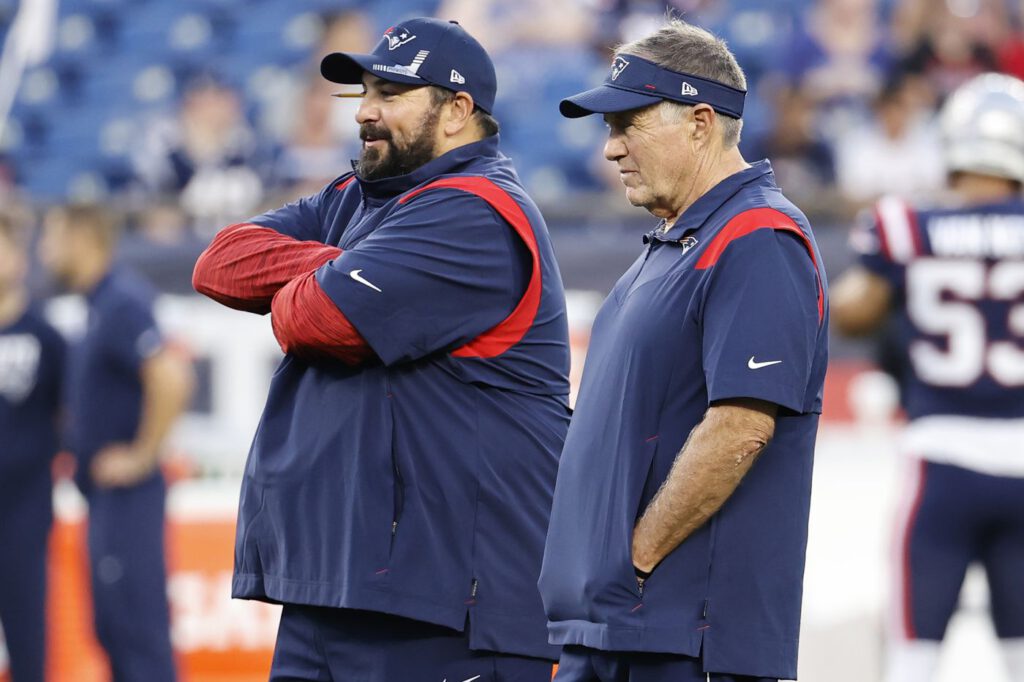 The Patriots will begin their three-day mandatory minicamp on the practice fields behind Gillette Stadium on Tuesday in Foxborough.

Patriots minicamp is open to the media, meaning we’ll have full coverage here on CLNS Media and Patriots Press Pass, with all eyes on New England’s reworked offensive coaching staff.

The Athletic’s Jeff Howe is reporting that former Pats defensive coordinator-turned-top offensive assistant, Matt Patricia, is the early front-runner to assume the role of offensive play-caller.

Although Patricia will have a major influence on offense, where he’s working with the offensive line and contributing to play-calling based on OTAs, the expectation here is that the responsibilities will be divided between Patricia and Joe Judge rather than one voice.

After viewing two organized team activities and speaking to those around the team, Patricia is taking on a run-game coordinator role while Judge is serving as the passing-game coordinator.

Publicly, that structure was more or less confirmed by Patriots wide receiver Kendrick Bourne when he cited Judge as the new voice for New England’s passing offense several times.

Ultimately, as head coach Bill Belichick said at his first press conference during OTAs a few weeks ago, the play-calling duties mean nothing until the regular season starts in September.

However, as the Patriots lay the foundation of their system during the spring, the overall direction of the offense remains a major storyline heading into minicamp.

Here are six things we’ll monitor at Patriots minicamp over the next three days:

Based on spring practices and remarks by Bourne in the media recently, the Patriots are tweaking their offensive system as they move away from the Josh McDaniels era. Over the last few weeks, we reported that New England was running more zone-blocking schemes and incorporating Shanahan-style elements offensively in OTAs. However, a team source quickly downplayed any seismic scheme shifts calling it, “a non-story at this point.” The source added that it’s June, and any reactionary takeaways to June practices should be taken with a grain of salt. Although that’s a fair sentiment, we will certainly monitor the foundational plays that the Patriots run this week to see if they continue a shift to a Shanahan-style offense.

2. How Will the Patriots Look Schematically on Defense?

Although the offensive scheme and coaching are the headliners, the Patriots’ defense is undergoing significant change personnel-wise. New England is working towards getting faster and lighter at linebacker, which will likely lead to schematic changes upfront because running a two-gapping odd front system with 235-pound linebackers is asking for those linebackers to get run over by a pulling guard. We have seen the Pats use their 4-3 over front with some regularity dating back to last season and could see more of it this season. Basing out of more even fronts would cover up offensive linemen on the line of scrimmage, keeping the second-level clean to fly around rather than forcing them into head-on collisions with blockers.

With J.C. Jackson now in LA, the Pats are going through a transition period at cornerback. When the Patriots haven’t had dominant cover corners in the past, they’ve relied more on a bend-don’t-break philosophy with softer zone coverages in the backend. During their seven-game winning streak a year ago, zone and zone-match structures were a big part of the turnaround defensively, even with Jackson in the fold. The Patriots’ top draft picks at the position, Marcus Jones and Jack Jones, still fit the mold of man coverage defenders, and Steve Belichick has said in the past that New England will always favor man coverage. But they might not have the horses to keep up with teams playing in man the majority of the time this season.

New England’s offensive line is another area with significant roster turnover. Rookie Cole Strange (left) and third-year standout Mike Onwenu (right) will replace longtime starter Shaq Mason and steady vet Ted Karras at the guard spots. With two new starters already sharpied into roles, it might be a bridge too far for the Patriots to part ways with starting left tackle Isaiah Wynn this summer. However, Wynn decided to sit out the voluntary portion of the offseason program after doing the same last spring. Last summer, he came into training camp out of shape, had a rough start to the 2021 season, and is now in a contract year with a $10.4 million cap hit on his fifth-year option. Again, creating another void along the O-Line as the team did by trading Shaq Mason in March is a risk. But the Pats are tight against the cap, and Wynn might not be fully buying into the program. With Wynn’s cap hit and performance last season, the Patriots could get similar production at tackle from Trent Brown, Justin Herron, and Onwenu.

4. How Will the Top-Four Wide Receivers Split Reps, Can Thornton Break Into Rotation?

During the OTA sessions, the Patriots had a clear hierarchy at the wide receiver position. DeVante Parker, Kendrick Bourne, Jakobi Meyers, and Nelson Agholor made up the top group in drills, while an “everyone else” group worked in behind them, which included rookie Tyquan Thornton at times. The question here is, can Thornton start to work his way into that top group? The Pats need to roster an insurance policy with Parker’s injury history at the “X” receiver spot. But Agholor is a very expensive backup at a $14.8 million cap hit. Along with Wynn, Agholor is the most likely surprise trade candidate given his projected workload relative to cost. Clearly, the team could get much better value from an outside field-stretcher on a rookie contract, such as Thornton, if the Pats’ second-rounder is grasping things quickly enough to give them quality reps in his first season.

5. Outside Cornerback In-Focus During Passing Camp

As most coaches will tell you, non-padded practices during the spring will always emphasize the passing game more than the running game. Although the team will drill blocking techniques and run fits without contact, they’re not live reps. Teams can live-rep the passing game more, though, with team drills serving as glorified flag football. With that in mind, the Patriots were allowing the outside cornerback competition to organically work itself out during OTAs, rotating in the following players in the top group: Jalen Mills, Malcolm Butler, Terrance Mitchell, and rookie Jack Jones. New England’s coaches will allow that group to determine roles on the field, with a wide-open competition to fill the massive void left by J.C. Jackson and Stephon Gilmore over the last year. Although Mills is a favorite to man one outside corner spot after playing well there last season, it’s truly anyone’s guess who will start opposite of him come September.

6. How Will the Patriots Deploy New Linebackers, Hybrid Safeties?

The Patriots are ushering in a new era at the linebacker position by moving on from Dont’a Hightower, Kyle Van Noy, and Jamie Collins in favor of younger options. Plus, they signed former Michigan star Jabrill Peppers in free agency to add to their hybrid/box safety group. The Pats want to get younger and faster at the second level, putting heavy expectations on second-year linebacker Cameron McGrone and third-year pass-rusher Josh Uche. The Patriots hope that the three Michigan men will bring legitimate explosiveness to a defense that couldn’t hang with the Buffalo Bills down the stretch last season. It’ll be interesting to see how the competition works itself out at inside linebacker and edge rusher opposite Pro Bowler Matthew Judon.

The most positive development for the Patriots heading into the 2022 season is the tireless work ethic of second-year quarterback Mac Jones. Jones has improved his diet, shed the bad weight from his college days, worked with throwing guru Tom House, and is putting in long hours at Gillette Stadium this spring. As the speed of reps wraps up, we’ll begin to unearth whether or not the physical transformation and improved mechanics are adding zip to Mac’s fastball. Although he’ll always lean on touch and ball placement, the year-two leap for Mac relies on him pushing the ball into NFL passing windows with more velocity. The early returns are overwhelmingly positive, and from this perspective, Jones is prepared to carry the Patriots to the playoffs this season if the rest of the team and coaching staff can pull their weight.