Lazar: Stock Up, Stock Down After Wide Receivers Put on a Show at NFL Combine

If the Patriots are targeting speed on offense, this the draft for them. 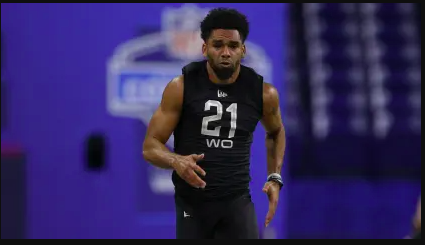 The first night of workouts on the field at Lucas Oil Stadium was a big audition for the Patriots.

New England’s front office is doing their homework on the wide receivers that we saw work out on Thursday night. Although the Pats don’t usually tip their hand with prospect meetings in Indy, the buzz around the combine is that this is truly a wide-open wide receiver class.

On the one hand, league executives admit that the lacking consensus is related to the fact that there aren’t any sure-fire elite prospects in a Calvin Johnson-type mold, which are rare anyway.

But on the other hand, the conversations about the wide receivers is that this is a “flavor” draft, with something for everyone depending on what you’re looking for at the position.

For example, bigger wideouts in the first round, such as USC’s Drake London (6-3, 219 pounds) and Arkansas’s Treylon Burks (6-2, 225 pounds), who project as outside receivers.

If a team wants speed and separation skills, then Ohio State’s duo Garrett Wilson and Chris Olave, as well as injured Alabama receiver Jameson Williams have you covered.

The “flavor” draft leads to debates and lengthy discussions in draft rooms about this group, which makes the measurement and workout numbers more important when stacking this class.

If Thursday night was any indication, this wide receiver class is filled with burners for the Patriots to add more speed on offense. More wide receivers ran faster than 4.4-seconds in this group than any other combine since they began collecting the data officially in 2008.

After the TV broadcast said that Olave put down a 4.26-second 40-yard dash, the official times from the league brought the Ohio State product back down to earth. Officially, Olave ran a 4.39, which keeps him in play for the Patriots at 21. In my first mock draft of the offseason, I had the Patriots selecting Olave with the 21st overall selection. The silky-smooth receiver from Ohio State still has plenty of vertical speed to threaten defenders off the line of scrimmage and snaps off routes with incredible precision to create separation. He would bring an excellent blend of speed and route-running prowess to the Patriots’ offense.

After weighing in at 183 pounds, Wilson needed to run well in the 40-yard dash to solidify himself as a top-20 talent. If Wilson didn’t break 4.5-seconds, he would’ve been the first wide receiver selected in the first round to weigh under 185 pounds and run slower than a 4.5. Well, forget about it. Wilson put down a terrific time with a 4.38-second 40-yard dash and will have his name called early in April’s draft.

3. Arkansas WR Treylon Burks is a Future NFL Star, But Not in New England

For Patriots fans still in the N’Keal Harry fog, drafting another big-bodied wideout with route-running limitations gives understandable pause. Burks has fantastic build-up speed with excellent balance and tackle-breaking abilities as a ball carrier, modeling his game after 49ers star Deebo Samuel. Although his usage at Arkansas was Deebo-like, his athletic profile and vertical element projects more like Titans wideout A.J. Brown. My eyes say that Burks will be a star in the NFL based on the tape, but his athletic profile hasn’t panned out in New England, and his 4.55-second 40-yard dash isn’t offering any optimism for his projection in the Pats offense. This week, Burks publicly admitted that his biggest flaw was his footwork and ability to get in and out of his breaks. Unfortunately, he’s probably better off developing into a stud somewhere else.

If Chris Olave is my day one draft crush, Skyy Moore has quickly become my day two crush. Moore had a relative athletic score in the 83rd percentile with a 4.39-second 40-yard dash. His explosive footwork in his releases and stems threaten corners early in his routes, he has the speed to pull away from defenders, and YAC skills as a ball carrier. Moore’s route-running polish is reminiscent of Julian Edelman’s shiftiness in his initial movements, but Moore has more vertical speed than Edelman. He was the best in show among the first group of wide receivers.

5. NDSU WR Christian Watson is the Outside Receiver For the Patriots

Since we aren’t as high on Burks and USC’s Drake London here, if the Patriots want a receiver who profiles as an X receiver, the name is Christian Watson. The North Dakota State wideout tested like an elite athlete, with a relative athletic score (RAS) above the 90th percentile. Watson is a top 50 talent in this class. He also has fantastic tape on the vertical route tree at NDSU with a schemed touch element. He created big plays on verticals, lining up in the backfield, and on jet sweeps. Plus, he stops his momentum impressively well for his size coming out of his vertical stems for intermediate possession routes. Cincinatti’s Alec Pierce is another size/speed prospect with excellent tape and a 9.98 RAS if Watson is off the board.

Dotson’s 4.41-second 40-yard dash and smooth trips through the on-field drills solidified the Penn State star as a potential first-rounder. Here’s the catch: Bill Belichick has drafted just one former Penn State prospect in his 20-plus seasons with the Patriots. Could that be a coincidence? Sure. Plus, Dotson’s field-stretching ability and sure hands would give New England another playmaker who projects as a Z receiver moving around the formation. But when there’s a strong trend with Belichick, we can’t ignore it. They stay away from Penn State guys.

8. Rutgers WR Bo Melton is Squarely on the Patriots’ Radar

With Belichick’s confidant Greg Schiano back at Rutgers, any prospect from the Scarlet Knights is on the Patriots’ radar as when Devin McCourty, Duron Harmon, and Logan Ryan were New England draft picks. Melton, like Austin, is another gadget weapon that will take jet sweeps and bubble screens for big plays with low 4.3-speed.

Boston Herald scribe Andrew Callahan reported on Phillips’s interaction with Bill Belichick on the UCLA campus during the Patriots’ trip to LA in 2020. As we know, UCLA head coach Chip Kelly is another Belichick confidant in the college ranks. I finished my report on Phillips this week, and his tape was okay. He doesn’t separate from defenders at the second or third levels, limiting his ceiling down the field. There’s some wiggle and certainly plenty of nuance in his underneath routes. Phillips tested along those lines with a below-average athletic profile and a 4.58-second 40-yard dash. He’s a nice day three option who can play the shifty slot role. But on a night where everyone was running fast, Phillips was one of the slower wide receivers in the class.

If you were expecting Bolden to run a blazing time in the 40-yard dash or look good in this environment, then you have the wrong idea about Slade Bolden. Bolden is a late day three pick who will make an NFL team because of his savvy route running and return ability. I’m not writing him off as a Patriots fit because he didn’t look good at the combine.