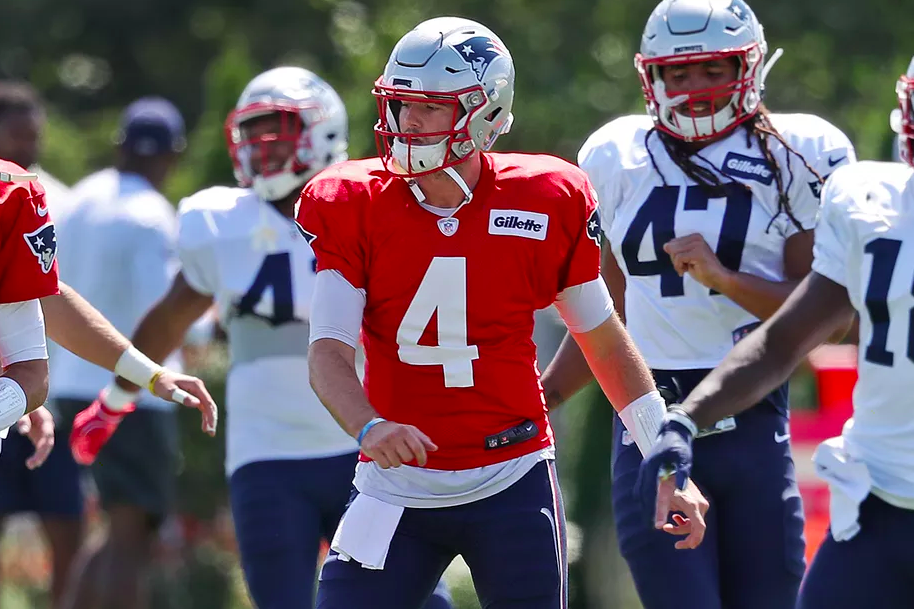 The Patriots had their first official practice of the 2020 season as the team had a helmets and shells session on Wednesday.

During his media availability following practice, Patriots running back Rex Burkhead observed the already intense competition that took place even in a non-padded, no-contact situation.

With a shortened camp and no preseason games, Burkhead pointed out that players trying to make their case for the initial 53-man roster have fewer opportunities to make an impression.

As a result of the time crunch, the practice had more energy than a typical first day of camp session, with players fighting for roster spots in a finite amount of time.

Along with the heightened intensity, players continue to point out quarterback Cam Newton’s infectious energy on the practice field, where Newton is running the show already.

Although any takeaways from the 30-minute live stream on Patriots.com are mostly meaningless, here are a few observations and thoughts from Wednesday’s pressers:

One aspect of Stidham’s game at the top of my watch list is his windup and release. In the past, when he loads up to drive the ball or throw deep, Stidham tends to extend his arm too far back where it takes longer to release the ball and gives pass rushers a chance to swat it out of his hand.

Stidham is working on shortening his release, and we saw that in a few throws on Wednesday as you see a more compact release in the clip above. Nobody is looking too much into these live streams, but we’ll continue to take mental notes of how Stidham’s release looks. In an offense that often relies on precision and timing, the extra tenth of a second it takes Stidham to wind up and throw compared to, let’s say, Brady, was notable in his rookie preseason. The good news is that, along with processing speed from a mental standpoint, he’s working on a faster time to throw. Both Hoyer and Newton looked fine in drills as well with Hoyer taking the first reps based on seniority.

First drill of Training Camp for the Patriots WR’s. Even in a release and stack, Sanu’s technique stands out above the rest. pic.twitter.com/fGg3idcMtN

During the stream, wide receiver guru Brad Kelly pointed out that Mohamed Sanu’s releases during a release and stack drill stood out above the rest of the Pats receivers. Sanu’s technique to move defensive backs at the line of scrimmage with his feet and finish with his hands to create space for himself to release at the line is something that wide receiver coaches such as the Footwork King pointed out numerous times in conversations this offseason. Sanu has excellent footwork and suddenness in his movements at the line, which helps him get cornerbacks off-balance. Unfortunately, the camera cut away during N’Keal Harry’s rep of the same drill.

The Patriots officially list the undrafted rookie as a tight end, but he was working out with the edge defenders (DE/OLB) during practice on Wednesday. Berry played both ways at Ohio State and has decent length and speed-to-power as a pass rusher, but the initial expectation was he’d try out at tight end, where he’s a sound blocker and had some highlight-reel plays after the catch. Berry is a longshot to make the 53 but seems like a prime practice squad candidate as a developmental prospect. He’s an NFL athlete that just needs to pick a position and improve his techniques and fundamentals.

Patriots starting right guard Shaq Mason met with the media following practice. Along with assuring us that’s healthy, Mason shed some light on new offensive line coaches Carmen Bricillo and Cole Popovich. The theme amongst the offensive linemen is that Bricillio and Popovich teach the same system and techniques as retired OL coach Dante Scarnecchia. Although the duo can’t be Scar, and counterproductive to try, it should make Pats fans feel good that they’re carrying over Scarnecchia’s philosophies. Both Bricillo and Popovich spent time learning under Scarnecchia before his second retirement, and sticking to the blueprint created by the legendary coach should make things easier for everyone. The Patriots would love to get similar results out of their offensive line as they got with Scarnecchia over the last two decades.

We heard from free-agent addition Damiere Byrd for the first time since the wide receiver signed with the team in March. Byrd is taking a similar approach to other new wideouts joining the Patriots in the past by learning the entire playbook (X, Z, and slot) rather than focusing on one position. Due to the optionality of the Pats offense, learning the whole picture rather than just your role helps receivers keep their spacing and understand their options based on the route combinations. Byrd also mentioned that throwing sessions with his Pats teammates this offseason helped him build connections with those players both on and off the field. The speedster might have a leg up on other non-roster locks at the position due to his three seasons in Carolina with Newton.