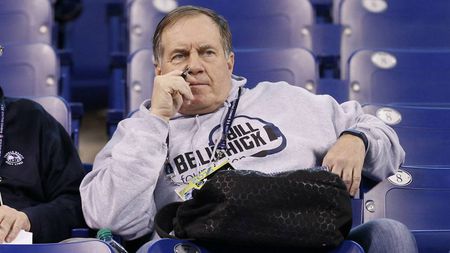 The Patriots and most of the NFL will converge for the scouting combine this week in Indianapolis.

Patriots head coach Bill Belichick and Director of Player Personnel Nick Caserio, armed with a new contract extension, will be in attendance scouting the best players in the 2020 NFL Draft.

Belichick always has a hands-on approach, but New England’s early exit from the 2019 playoffs has the coach even more entrenched in the draft this early relative to other seasons.

The Patriots have plenty of holes to fill and potentially significant needs depending on how free agency shakes out this March, and Tom Brady’s free-agency will be the talk of the combine.

Along with Brady, and ongoing negotiations with the new collective bargaining agreement, there’s plenty of league news to monitor in a busy time for the NFL.

Many rumors you’ll hear come from players’ agents trying to increase interest in their clients, and the physical testing is nowhere near as important as medicals and interviews for draftees.

With that in mind, here are ten Patriots-related things to monitor over this week:

Although the purpose of the combine is to get to know this year’s draftees, we’ll keep our ears peeled for any real Brady news. According to Tom Curran and others, the Pats and Brady are expecting to begin contract negotiations as early as this week, so we might find out roughly where the two sides are at, and if any dark horses are entering the Brady sweepstakes. Brady’s market might come to light over the next few days, and the same can be said about other free agents. Of note, the tight end market in free agency and the asking price for trade targets such as Cleveland’s David Njoku or Tampa Bay’s O.J. Howard will be of particular interest to the Patriots. The Pats would like to add veteran tight end help this offseason.

Sticking with quarterbacks, after his first checkup came back clean, Patriots fans hoping to see Alabama quarterback Tua Tagovailoa fall down the board might be out of luck. Tagovailoa will not do any physical testing in Indy, but he’ll have an all-important medical check where teams can inspect his surgically repaired hip themselves, and he’ll go through the interview portion at the combine as well. The expectation based on his first checkup early this month is that Tua won’t need to wait long to hear his name called in April. Barring a setback, Tagovailoa will be a top ten pick.

Besides Tua, Pats fans might want to keep an eye on Georgia’s Jake Fromm and Washington quarterback Jacob Eason. Fromm has the clean mechanics, experience, and high I.Q. that the Patriots covet. Eason has a huge arm and makes in-rhythm anticipatory throws. Both could be in play for New England with Eason potentially sneaking into the backend of the first round.

3. Is There a First-Round Tight End in This Class?

After studying the top tight ends in this year’s class, the options are a little barren at the top. There’s no T.J. Hockenson or Noah Fant this year, and not a single tight end finished with a round-one grade from me based on the tape. Dayton’s Adam Trautman currently sits atop my board, but it seems unlikely that a team would take a chance on an FCS product in the first round. There are some other intriguing options, such as Brycen Hopkins or Cole Kmet, that could separate themselves from the pack with an eye-catching combine. Hopkins gives off some Evan Engram vibes, assuming he tests well, and Kmet has the size and burst to be an every-down player. Will one of those three, or another, emerge as a clear-cut first-rounder? The information we get this week will go a long way in setting the Patriots’ board next month.

4. How Fast Is Henry Ruggs and Justin Jefferson?

Teams in need of a quarterback or offensive linemen in a stacked class at both positions could push some of the wide receiver talent down the board. If so, that would be great news for the Pats, starting with Alabama speedster Henry Ruggs. Ruggs wins at all three levels with a full route tree and is expecting to run one of the fastest 40-yard dashes this year. There’s an outside shot of one of the “big three” of Ruggs, teammate Jerry Jeudy, or Ceedee Lamb falling, but if Ruggs runs in the 4.2s, you can all but kiss that dream goodbye. We’ll also be monitoring LSU’s Justin Jefferson closely. Jefferson is the best scheme fit in the draft following the big three, but there are some concerns about his play speed and explosiveness. He can solidify himself in the round one conversation with a strong combine.

Just my gut talking here, but this offseason feels like Belichick returning to his team-building roots. Two of the Pats’ last three first-round picks were skill position players, with N’Keal Harry at the top a year ago, and something tells me that Belichick would like to get back to drafting in the trenches, leaving the skill positions to free agency and trades. Every NFL offense has a tough time projecting college players into the pro game, and we saw that first-hand in Harry’s rookie season.

If my instincts are correct, Michigan offensive linemen Cesar Ruiz plays the game like a Belichick offensive linemen. He’s nasty and a bully, plays all three spots on the interior, communicates well, and is lethal as a puller and anchors well in pass protection. Outside of Isaiah Wynn, the Pats haven’t gone to work on the trenches until later in the draft in recent years. With some potential shakeups coming on both lines, Belichick could go back to his bread-and-butter. If he does, Ruiz will be squarely in the mix at 23.

6. Don’t Sleep on Defense for the Patriots

We talk so much about needs on offense, and rightfully so, but we could also see some of the defensive talent fall with quarterbacks flying off the board. For the Pats, that brings up a few interesting names, but we’ll talk about safeties Xavier McKinney and Grant Delpit here. The Patriots need to think about the future at a vital position in their defense with free agent Devin McCoury (age 32), Patrick Chung (age 32), and Duron Harmon (age 29) starting to get long in the tooth. McKinney is a do-it-all type with the aggressiveness and size to hold up in the box and the range to play on the backend. As for Delpit, he’s more of a ball skills and man coverage guy. Delpit had a rough year at LSU with too many missed tackles in critical games, which could see a top ten talent a year ago fall to the back-half of the first round. Minnesota’s Antoine Winfield, Jr. is another intriguing name at safety on day two.

Although the Pats have a future need at safety, they have an immediate need along the defensive line and could need a new strong side edge defender if Kyle Van Noy leaves in free agency. Epenesa was the consensus EDGE1 going into the college football season, but Chase Young’s breakout combined with a lack of first-step explosiveness saw Epenesa lose that top spot, and potentially fall into the late teens or early 20’s.

AJ Epenesa's hands are stupid. His technique/strength/size combination is incredible, the reason why he should be considered the No. 2 edge defender in this class.pic.twitter.com/cqmbIdk2sZ

The Iowa product reminds me a lot of Trey Flowers. He wins with technical savvy and processing speed rather than elite athleticism. Epenesa’s hands are dominant with a variety of pass-rush moves and the hand strength and power to set the edge against the run. At 280 pounds, he can also kick inside in sub fronts and rush the passer over the interior offensive line. He checks every Patriots box from size, playing style, and the Iowa connection can vouch for his work ethic and I.Q. Keep an eye out for Epenesa this week.

There are several changes to this year’s combine, including changes to the on-field drills and the interview process. We’ll get to the on-field changes, but first, it’s worth mentioning that teams will have fewer individual interviews this week than in the past. Teams will now have 45 player interviews that last 18 minutes rather than 60 meetings that last 15 minutes. Although the Patriots don’t typically draft players they interview at the combine, they met with Isaiah Wynn and Sony Michel before the 2018 draft.

The combine organizers also made changes to the on-field drill portion of the event this year, with new drills at every position. The best changes from this perspective came on the line of scrimmage, where offensive linemen will now respond to coaching cues rather than fellow draftees holding the bag during blocking drills.

The timed “Figure 8” drill will be a new addition for DL at the NFL Scouting Combine.

Prospects are to stay as close to the hoop as possible. There’s an object on the ground for them to grab while staying on the move, which shows their bend/flexibility.

On the defensive side of the ball, defensive linemen will now go through the “run the hoop” drill that mimics bending the arc, flexibility, and balance. Scouts are lukewarm when it comes to combine drills, so these new additions and subtracting some of the useless stuff will hopefully make that portion of the event more worthwhile.

According to our online sportsbook partners BetOnline, Alabama’s Henry Ruggs is -400 to win the 40, and Ruggs might break John Ross’s combine record, which is -1000 odds. If you’re looking for more of a sleeper, Utah cornerback Javelin Guidry can flat-out fly.