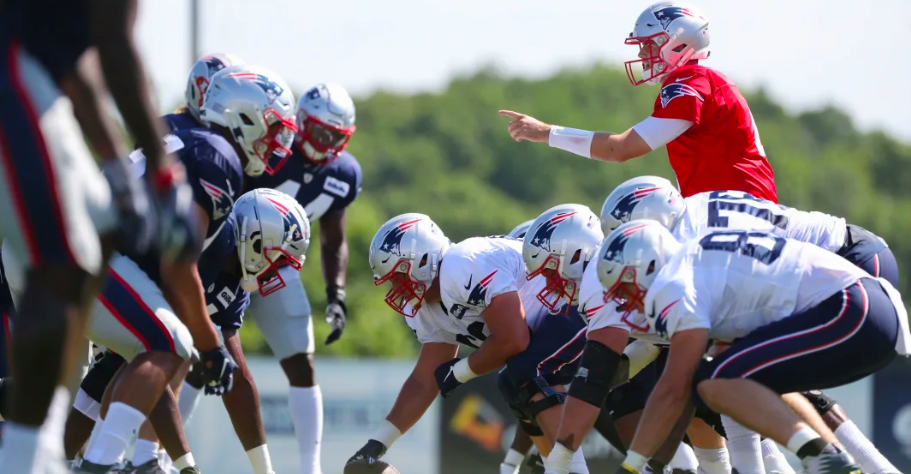 FOXBORO — the Patriots held their final open practice of training camp at Gillette Stadium on Tuesday morning, a walkthrough with players in shorts and shells.

Rookie wideout N’Keal Harry missed the non-padded practice with multiple ailments including issues with his hamstring and foot, but none of his injuries are believed to be serious.

Along with Harry, tight end Matt LaCosse and rookie Yodny Cajuste (NFI list) were not spotted at practice.

The wide receiver experiment for 2018 seventh-round pick Danny Etling also came to an end on Tuesday.

The Patriots waived the converted quarterback after it was clear from the beginning that the LSU product had little hope of becoming an NFL wide receiver.

Etling has some scout team value on the practice squad since he can play wide receiver, quarterback and special teams. He could return in that capacity in a few weeks.

With the Patriots partaking in a light walkthrough on Tuesday, here are ten storylines that I’ll be monitoring as we make the trip down to Nashville for a week with the Tennessee Titans:

1. How Much Isaiah Wynn Will We See?

On Monday, the 2018 first-round pick took part in full-contact drills for the first time this summer. He then rotated in with Dan Skipper during Tuesday’s walkthrough as the starting left tackle. We’ll see if Wynn is a full participant this week in Nashville and what that means for Skipper and others behind him on the depth chart. Wynn looked great for a player that hasn’t hit anyone in a year, showing off excellent footwork and hand usage. Behind him, the team seems to be grooming Skipper as the third tackle while also welcoming back Cole Croston this week. Until rookie Yodny Cajuste comes off NFI, that backup swing tackle role is up for grabs.

Before we get to Stidham potentially being Tom Brady’s heir, let’s see if he can unseat Brian Hoyer as Brady’s backup. A strong week in Nashville after his breakout performance against the Lions would make things very interesting at QB2 for New England. Stidham showed great poise, downfield accuracy and command of the offense in his preseason debut against Detroit. If he continues to build on those things, Hoyer becomes expendable.

3. The Honeymoon is Over For Maurice Harris

After a strong minicamp and start to training camp, Harris was playing his way onto the roster. Since then, Harris has cooled off considerably as everyone hitches their wagon to the Jakobi Meyers bandwagon. Typically sure-handed, Harris dropped two passes in last Thursday night’s preseason opener and then dropped another ball from Tom Brady in practice on Monday. Harris still has inside-outside versatility and a decent feel for finding soft spots in zone coverage. But with veteran Dontrelle Inman and second-year pro Braxton Berrios breathing down his neck, Harris needs to pick it up to make the roster.

Berrios has left a good impression on me over the last few weeks. He’s a jitterbug in the slot that also adds value as a return man; he’s a potential asset as a punt returner and backup to Julian Edelman. However, Berrios hasn’t always separated against starting level competition like when he goes up against Jonathan Jones in practice. Berrios proved he could uncover against two’s and three’s last week in Detroit. But he’ll need to take that next step against Malcolm Butler and company to earn a roster spot.

5. Dontrelle Inman Making a Push, Is It Enough?

After a slow start, the veteran wideout is starting to find his footing in the New England offense. Inman had a few nice grabs in Detroit and took some reps with the starters this week back in Foxboro. The veteran was great in the playoffs for the Colts a year ago and had 58 catches for 810 yards with the Chargers back in 2016. He’s an NFL receiver, but he’ll need to out-play some of the younger guys to the point where his experience outweighs their potential.

6. Eric Saubert and the Rest of the Tight Ends

Matt LaCosse is injured, Ben Watson is suspended, Stephen Anderson is limited, and the Patriots tight end group is a concern. Yes, the Patriots can devalue the tight end position post-Gronk, but this group isn’t offering much at all outside of Watson. Saubert stepped up in his first practice in New England taking special teams and first-team reps instantly, and he even caught a touchdown from Tom Brady in a red zone drill. The former Falcons tight end has size, athleticism and special teams value, but only five career receptions. The Patriots are shopping at the dollar store right now at tight end.

7. We Need to See More From Obi Melifonwu

The Patriots are giving third-year safety Obi Melifonwu every opportunity to make the roster, but he still needs to show me more to earn a spot. Melifonwu has made some plays covering tight ends in practice but was out of position a few times in the game against the Lions. As of now, he’s still more of an athlete than an assignment sound football player.

On the 16-yard reception he gave up against Detroit, the Lions ran a play-action pass with tight end Jesse James leaking out on the same side as a quarterback bootleg. James ran into Melifonwu’s coverage, but Obi got his eyes caught in the backfield on the play fake. I like the idea of keeping Obi on the roster to develop him behind the veterans, and he can contribute on special teams, but he’s pretty raw for a third-year pro.

8. Can Shilique Calhoun Be a Surprise Addition?

Calhoun rotated in with the starters this week after a terrific week in Detroit. The Raiders castoff was a very productive player at Michigan State but didn’t pan out as a third-round pick in Oakland. He has a nice toolbox of pass rush moves and has been okay against the run as well. There are a lot of bodies at his position, but Calhoun is playing his way onto the roster.

9. Derek Rivers in a Battle For a Roster Spot

Rivers is another edge defender drafted in the third round that’s in a battle for a roster spot. The 2017 third-rounder has improved this summer from where he was a year ago adding to his repertoire of pass rush moves. But it doesn’t look like Rivers will be an every-down player in the NFL at this stage. He’s in the mix as a situational pass rusher on third downs or obvious passing situations, though.

The fifth-round pick is growing on me, and he fits the Patriots’ odd front base well. Cowart has the perfect body type and physical playing style for a five-technique defensive end in a three-man defensive line, and he beat up on scrubs last week against the Lions. The numbers game is challenging for Cowart, but it would be nice if he could stick around as a developmental piece on that defensive line.