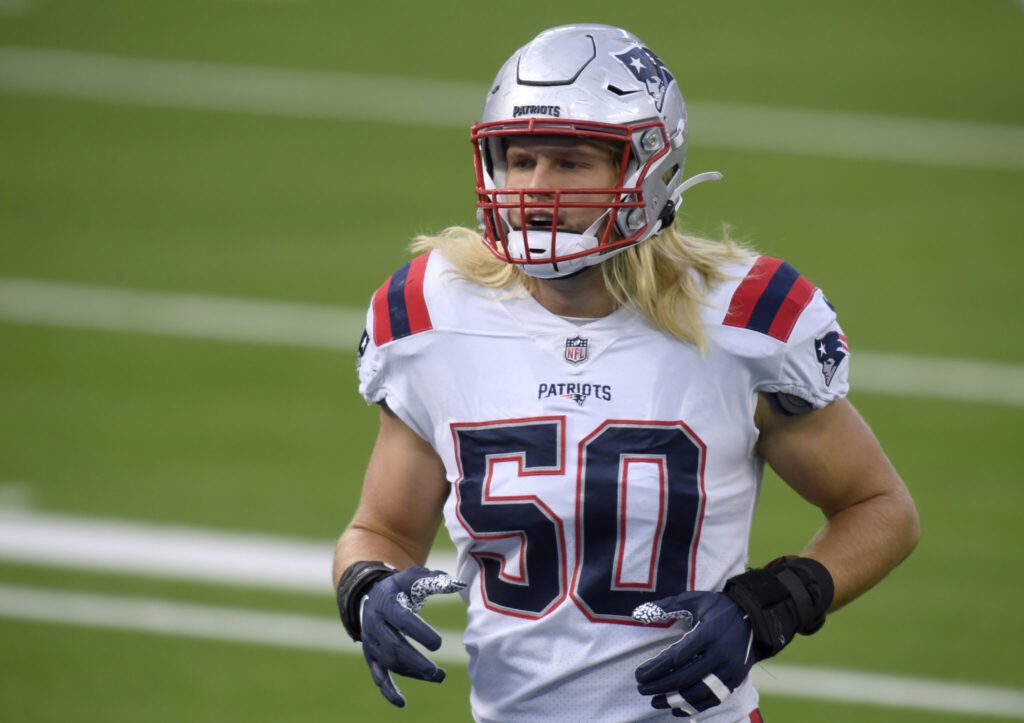 INGLEWOOD, CALIFORNIA - DECEMBER 06: Chase Winovich #50 of the New England Patriots during warm up before the game against the Los Angeles Chargers at SoFi Stadium on December 06, 2020 in Inglewood, California. (Photo by Harry How/Getty Images)
Share
Facebook Twitter Email

The Patriots and Eagles will cap off a busy week in Philadelphia in Thursday night’s second preseason contest at 7:30 PM ET.

However, rookie quarterback Mac Jones will likely dominate the snaps once again, which gives this game plenty of juice from a Pats perspective.

The quarterback situation is always top of mind with the Patriots, so we’ll go through non-QBs and situations in a preview of Thursday night’s game.

The former first-round pick will top our preview list all summer long. Harry is stringing together good days at practice, with two strong ones in Philly. The 6-foot-3 wideout caught a ~25-yard touchdown from Mac Jones at the end of Monday’s session, streaking down the left sideline. The touchdown in team drills came after Harry went 3-0 in one-on-ones, and he then used his large frame effectively in Tuesday’s red-zone heavy practice by making himself big in-between zone defenders. At some point, Harry’s practice performance needs to show up on game day. It didn’t happen against Washington, but he’ll get another chance on Thursday night.

Winovich returned to practice this week after landing on the active/PUP list for the first 12 practices. The promising Winovich was once tabbed a premier young player on the team, but issues setting the edge of the defense saw him fall out of favor last season. Now, Winovich is late to the party at a position where the Pats added Matt Judon, Kyle Van Noy, and Ronnie Perkins this offseason (plus Josh Uche in 2020). There’s a lot of competition at outside linebacker, and questions remain about Winovich’s fit in Belichick’s defense. If the 2019 third-round pick doesn’t hit the ground running, Winovich might be a surprise trade candidate.

Asiasi is a lone wolf. Hunter Henry, Jonnu Smith, and Matt LaCosse are unlikely to suit up, while the team released Troy Fumagalli with an injury designation to get down to 85 players by Tuesday’s deadline. The good news is that Fumagalli’s release signals that Henry and Smith aren’t dealing with serious injuries. A source described the dynamic TE duo by saying that Henry and Smith could play if it were a meaningful regular-season game. As for Asiasi, he is still getting his footing after landing on the COVID list to start camp. He flashes abilities as a receiver by threatening defenses up the seam and is a solid run blocker. However, Asiasi’s hands are sometimes shaky, and he still makes an occasional mistake in his route running. The injury bug at tight end is a good opportunity for Asiasi to get live game reps and show his worth.

One positive development for the Pats over the last week is the emergence of third-year corner Joejuan Williams. Williams still needs to do a little more before we say the light officially came on, but he earned starter reps with a solid preseason opener and didn’t look out of place in joint practices. The Pats’ CB had a nice PBU on speedster Jalen Reagor up the left sideline and contested another pass in the end zone. Williams playing outside also frees up Jalen Mills to move inside the formation, where he’ll play once Stephon Gilmore returns. The puzzle pieces make more sense with Williams at outside corner and Mills inside, while the Pats need one of their depth CBs to emerge. Maybe Williams is finally becoming that guy.

The Kristian Wilkerson hype train is screeching to a halt. After a great start to camp, Wilkerson is suddenly dropping everything. He had three drops in the joint practices, two of which were easily catchable balls. Wilkerson is still getting open, but creating separation isn’t as appealing if you can’t finish the play. He is trending towards a development player that could end up on the practice squad. Earlier in camp, Wilkerson looked like a legit contributor, which is still possible if he eliminates the drops.

New England’s second-round pick will likely make his preseason debut on Thursday night after sitting out the opener. Barmore was a full participant in joint practices and had a very good summer before the toe/foot issue. The Alabama product brings some juice and versatility to the defensive line. Barmore is a pass-rushing threat on the interior of the line, with the potential to round out his game into a three-down player. Lawrence Guy, and Davon Godchaux, among others, play their roles extremely well on the defensive front. But Barmore has the game-changing talent to make splash plays as an interior rusher. The Patriots need that juice.

Another sneaky storyline that came out of last Thursday night’s preseason game was veteran Henry Anderson playing into the second half. Anderson looks good in practice, especially during one-on-one drills, but it’s usually not a good indication when a seven-year vet plays in the second half of the first preseason game. Anderson was an easy free-agent target to project due to his heavy playing style and versatility. However, it wouldn’t be the first time a defensive lineman with an NFL pedigree didn’t catch onto New England’s system (Mike Pennel, Michael Bennett, etc.). We aren’t in surprise cut candidate territory yet, but if Anderson is buried on the depth chart again this week, the seat is starting to heat up.

Colbert was banged up in the early portion of camp, but he practiced this week and is another under-the-radar vet who had solid tape with the Giants a year ago. On Tuesday, Colbert got a few opportunities when Kyle Dugger and Adrian Phillips were struggling with the Eagles’ tight ends. Plus, he is drinking the New England kool-aid, all the way down to praising the strength and conditioning program for getting him in the best shape of his life.

New England’s kicker competition isn’t quite the same because the Patriots didn’t draft Nordin. Still, the Nordin hype due to his ridiculous leg strength reminds me of the brief punter battle between reigning All-Pro Jake Bailey and then-incumbent Ryan Allen. Allen was coming off an outstanding Super Bowl performance, but Bailey came into minicamp his rookie season and was booming punts. Allen didn’t report right away, but he came in to compete a few days into minicamp. The Patriots cut Allen shortly after that because Bailey was so good. Again, it’s not a perfect comparison, but it feels like Nordin is stealing Folk’s job while the 36-year-old vet is hurt. The undrafted rookie made all three of his kicks in Tuesday’s practice, and there was a moment where the referees standing under the goalposts looked at the kick sail through in awe. I’ve never seen refs look that impressed by how far a kick traveled.

When we did our third 53-man roster projection, Bethel was listed under special teams in the “coverage specialists” category. However, Bethel was decent in the opener at outside corner and is getting more looks there in practice. Earlier in his career, Bethel was a rotational cornerback that played 43 percent of the defensive snaps in 2017 with Arizona. He wasn’t always exclusively a special teams player, and with few options at outside CB, Bethel could play a little on defense if he’s their best depth option.