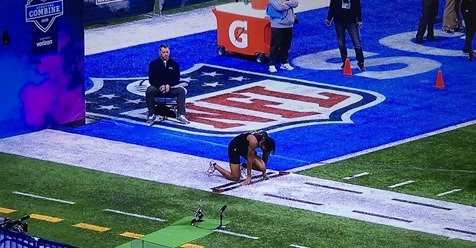 INDIANAPOLIS, IND. — the first night of primetime combine coverage is in the books as the quarterbacks, wide receivers, and tight ends went through athletic testing inside Lucas Oil Stadium.

Although we’ll always trust the tape over combine testing, some categories and thresholds translate directly to NFL success depending on the position.

For example, studies show that speed score, which is weight-adjusted 40-yard dash times, has a strong correlation for tight end success at the NFL level, so the information isn’t irrelevant.

Plus, there’s often prospects that are lower on the board that stand out athletically, which puts them on my radar if I missed them in my film study before the combine.

Here are ten things we learned from a Patriots perspective on Thursday night:

One of these tight ends might prove me wrong down the road, but trusting my eyes and the testing numbers, this class is underwhelming.

Cole Kmet and Adam Trautman are at the top, and they’re starting-caliber prospects, but this group lacks top-end talent and isn’t deep with in-line options that also have receiving upside.

Plus, the receiving specialists didn’t perform well with Brycen Hopkins, Hunter Bryant, and Harrison Bryant lacking the explosiveness and speed you’d like to see with that skill set.

One of these guys could develop into something unforeseen, but based on the information we have, I don’t see it, especially earlier on in their careers and compared to recent tight end classes or the loaded 2021 class.

Any tight end selected in the top 50 picks would be a reach from this perspective.

Be prepared for me to put LSU’s wideout Justin Jefferson at the top of every big board and mock draft for the Patriots, he’s my guy, and I will pound the table for him in the first round.

Jefferson solidified himself as a first-round prospect with a terrific 4.43s 40-yard dash, answering the only question marks he had, which were his long speed and explosiveness.

The LSU product is a smooth criminal with natural hands and incredible body control. In the gauntlet drill above, watch how easily Jefferson brings in each pass, the fact that he doesn’t move off the line as he comes across the field, and doesn’t slow down as he works through the drill.

Asked Justin Jefferson about his slow-mo style on certain routes. Said it’s all about timing and pacing the play. Mentioned he wanted to give Burrow a chance to read out the play and still come back to him. #Patriots #NFLCombine pic.twitter.com/GC0vuas6Ea

During his media availability this week, Jefferson broke down the importance of pacing and spacing in his routes. On tape, he takes his time getting into routes sometimes, which he said was his way of staying on time with quarterback Joe Burrow.

Jefferson has it all for the Patriots. He’s an outstanding athlete, has inside-outside versatility, natural receiving skills, is a proficient route runner and separator, and an ideal scheme fit.

The Patriots might not want to draft a wide receiver in the first round two years in a row, but Jefferson is a perfect match that will be difficult to pass up assuming he’s on the board.

3. Cole Kmet is Now TE1 After Testing Backs Up Tape

We took some time to get here, but combining my tape study with Kmet’s athletic testing, he’s now the top tight end on my board with a second-round grade, ahead of Adam Trautman.

Cole Kmet with an elite RAS at the #NFLCombine. Doesn't surprise me at all that he posted great speed and explosiveness scores but struggled with agility. Exactly how he looked on tape. https://t.co/Asr7DNLSix

Kmet posted an elite RAS score, a metric created by Kent Lee Platte, that is a terrific summation of a players’ athletic profile, and his numbers back up what we saw on tape.

The Notre Dame product is an in-line tight end at 6-5, 262 pounds, has excellent initial burst off the line, and enough speed to carry vertical routes. And like we saw on tape, he struggles to change directions and transition his hips to create separation on horizontal routes.

Kmet said he played at 260 this past season, now up to 262, expects to run around a 4.7. #Patriots #NFLDraft pic.twitter.com/X0ORK2BFrc

As Kmet explained this week, he’s at his best working the seam and on crossing routes off of play-action, which is perfect for the Pats, and backs up those explosiveness scores.

Kmet needs to improve his blocking technique to get the most out of his big frame, with his hip stiffness factoring in there as well, but he’s the most complete tight end in this class.

Although Kmet is my top tight end, Dayton’s Adam Trautman didn’t do anything to change my mind on his potential at the NFL level, even if his 40 time wasn’t the best.

Trautman puts up good numbers across the board. Thought he also did the best in the blocking/sled drill. #NFLCombine https://t.co/IXqKtksXLP

Trautman wasn’t a burner by any means on tape, so his slowish 40-yard dash didn’t surprise me, and he still posted a great RAS thanks to good explosiveness and terrific agility.

Trautman’s 6.78-second three-cone time was the fastest by a tight end at the combine since 2003, which is as far back as the NFL data goes.

We all know how much Belichick loves the three-cone, and Trautman also was the best blocker of the group in the sled drill.

Besides Kmet, Trautman is my second choice for the Patriots at tight end and is also a complete option that will be an immediate red zone threat due to his size and catch radius.

5. Four Quarterbacks Selected in the Top Ten, Five in Top 20?

The Patriots might be happy, or maybe they won’t be if Brady leaves, but the feeling around the combine is that four quarterbacks could go in the top ten, and five will go in the top 20.

The first three are top ten locks assuming Tua is healthy, and the NFL is never one to turn down a quarterback with Eason’s arm strength and smooth throwing mechanics.

Plus, Utah State’s Jordan Love is receiving tons of buzz here in Indy this week and could be a fifth quarterback going in the top 20 or earlier.

The Bengals, Lions, Dolphins, and Chargers all have top-ten picks and needs at quarterback, and another QB-needy team could always trade up into the top ten to grab one of the prizes.

If five quarterbacks do go early, and the rest is filled out by the likes of Chase Young and a loaded group of offensive tackles, it’ll push the talent at other positions down the board for the Pats.

Assuming Brady is back, that means all the skill player talent will slide, even potentially one of the “big three” wide receivers in Jerry Jeudy, Henry Ruggs, or CeeDee Lamb.

There’s also plenty of defensive talent, both defensive backs, and defensive linemen, that might interest the Patriots if they fall, such as Iowa defensive end A.J. Epenesa.

The Patriots should welcome a quarterback-heavy top ten.

With stigma against air raid quarterbacks gone, Washington State’s Anthony Gordon impressed me with his quick feet and lightning-fast release, which is probably the best in this class.

Gordon is likely a late-round option that might interest the Patriots as they try to find Tom Brady’s heir, and he has a lot of qualities that they like in quarterbacks.

The Washington State product has excellent footwork and poise in the pocket, makes quick decisions with the ball, has a terrific work ethic by all accounts, and that smooth release.

Watching him throw on Thursday night, Gordon’s feet and release stood out among the participants, which was surprising because I didn’t love his tape.

If any of you had Okwuegbunam destroying the rest of the class in the 40 and running one of the best times we’ve seen by a tight end of his size, go to Vegas and place a million bets.

Okwuegbunam didn’t look fast or like a dynamic athlete on tape, at all, and I’m honestly still shocked that he ran a 4.49s 40-yard dash. How the hell did that happen?

After he measured in at 6-5, 258 pounds, went back to watch more of Missouri TE Albert Okwuegbunam. Have him as a backup with plus-receiving skill.

Vertical routes are smooth. Nice set up and rocker step to get outside the safety here, and his ball skills are great. #Patriots pic.twitter.com/sYd33SZMEB

Okwuegbunam had some nice downfield grabs working the seam and finding the ball over his shoulder, which is not easy for most tight ends, especially the bigger guys. He’s not a very effective blocker due to poor pad level and balance, but he could grow into a passable in-line option due to his size and athleticism.

My instincts tell me to trust my eyes and leave Okwuegbunam where he is based on my tape grade, which is on day three of the draft, but that 40-yard dash was something.

8. Patriots Should Stay Away From Laviska Shenault, Jr.

Shenault’s tape is a lot of fun to watch, and he’s faster and more explosive than his 40 time suggests, but his skill set is worrisome from a Patriots perspective.

The Colorado product is a combination of Cordarrelle Patterson and N’Keal Harry with the versatility to line up all over the field, including at running back or wildcat quarterback.

His route running needs work as he drifts coming across the field and doesn’t have his timing down coming out of his breaks, so he relied on versatility and schemed touches in college.

However, his 4.59s time in the 40-yard dash is troublesome for his stock, seeing that he needs to be elite as a ball carrier to thrive, and he isn’t running away from anyone at that speed.

Shenault plays faster than 4.59s, so maybe the 40-yard dash isn’t his vibe, he’s hurt, or when the bright lights are on, he finds another gear in pads. But it’s a no for me with New England.

Boise State wide receiver John Hightower is someone I watched live during the season but didn’t get the chance to study before the combine.

Hightower’s speed that was apparent on tape as a ball carrier and deep threat translated on the combine stage with a 4.43s 40-yard dash.

As a vertical route runner, Hightower makes smooth transitions and creates room for himself at the top of the route to use his speed into pockets of space. On the play above, he runs a stutter-and-go where he angles his stem at the defensive back playing with inside leverage. He gets up on the defensive back, then explodes out of it on the fade and hauls in the touchdown.

Along with deep receiving skills, Hightower’s speed translates to schemed touches such as reverses and screens as well as in the return game where he’s an elite kickoff returner.

Hightower is a mid-round option to replace Phillip Dorsett and add a dangerous kick returner after playing it safe on kickoffs with Brandon Bolden in 2019.

Okay, so hopes that Ruggs might fall far enough in April for the Patriots to steal the Alabama speedster probably died on Thursday night when he clocked in at 4.27s in the 40.

Ruggs wasn’t John Ross fast, but he’s also an all-around athlete with a 42-inch vertical and 131-inch broad jump, showing off his explosiveness as well as his straight-line speed.

There’s a chance that the quarterbacks and offensive tackles push one of these great receivers down the board, but the Pats will need an aggressive trade up to make it happen.