Lazar: Ten Things We Learned From the Patriots 14-10 Win Over the Bills

The Patriots now have sole possession of the number one seed in the AFC. 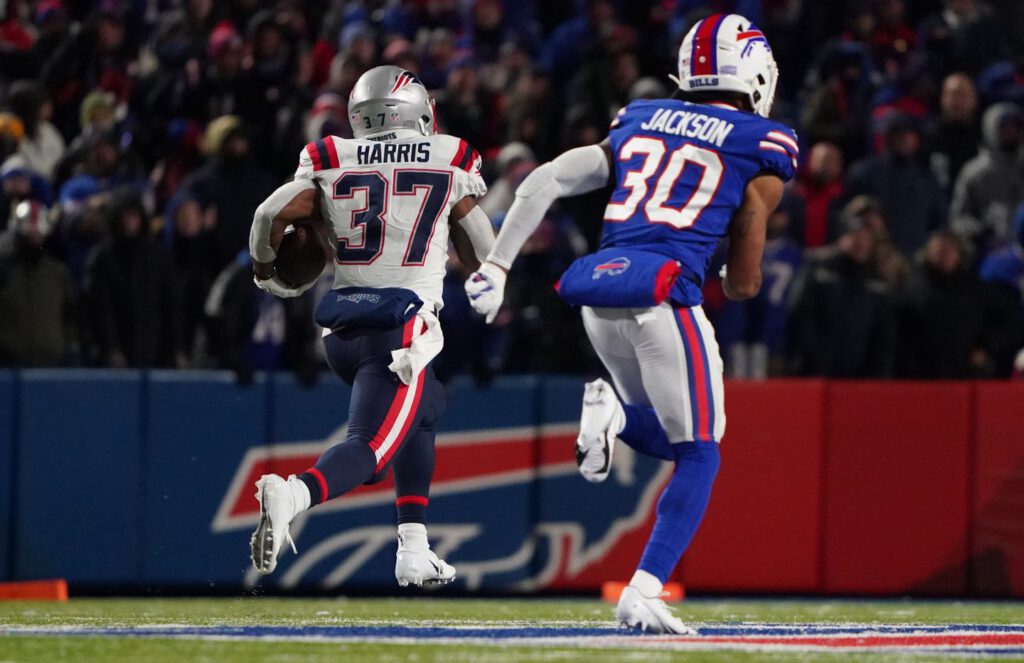 ORCHARD PARK, NY – The Patriots held on to the top seed in the AFC by defeating the Buffalo Bills 14-10 in one of the most bizarre NFL games we’ll ever see.

New England became the first NFL team since 1974 to win a game with their quarterback, Mac Jones, attempting only three passes in a Belichickian statement on playing to win the game.

We’ll tell stories about the wind storm in Buffalo on Monday night for years. The Pats are a gritty bunch, Belichick won a weird chess match, and we aren’t trying to take away from any of that.

The Pats lined up across from Buffalo’s defense and ran the ball with six offensive linemen on 64% of their snaps right down their throats for 222 yards, even though the Bills knew it was coming.

The Patriots can run the ball and control the line of scrimmage against a finesse Bills team who had no choice but to throw the ball to generate offense with their own anemic running game.

Belichick and New England’s defense executed a plan that forced Bills quarterback Josh Allen to dink-and-dunk down the field, then held Buffalo to one-for-four in the red zone.

It was fun, it was weird, and the big brother beat up the little brother, but we will never see another game like this one again.

When the Patriots play the Bills up in Foxboro in Week 16, the game script will likely follow a completely different blueprint, and we’ll see if New England wins a more open passing game.

Here are ten things we learned as the Patriots improved to 9-4 on the season:

1. Pats Lean All the Way Into Playing to Win the Game in Windstorm

There’s playing to the conditions, and then there’s doing what Bill Belichick did on Monday night. The Pats ran the ball 46 times, played field position, and made sure they had the win in their favor in the fourth quarter.

Following the game, rookie quarterback Mac Jones told CLNS Media, “we run the plays that are called. We had a game plan, but obviously, that changes a little bit with the conditions. At the end of the day, we had the looks we wanted to run the ball, so we kept doing it.”

It’s important to note that Jones said all the right things after the game about the Pats’ strategy and wasn’t bothered by the run-heavy plan.

Jones added that the Patriots knew that if they took care of the ball, they’d win the game and did what they needed to do to win.

Entering Monday night’s game, the Pats knew they had a distinct advantage in the trenches against Buffalo. The Bills defense is built to stop the pass. Even though they had eight-plus defenders in the box at times, Buffalo was still playing with lighter personnel at edge defender and only two true defensive linemen.

New England got their run game started by attacking the edges on crack toss schemes.

In the game’s biggest play (+6.5 EPA), the Pats spring Damien Harris with a few key blocks. First, Harry “cracks” the end, letting Wynn kick out the outside corner to get the edge. Then, Ted Karras goes through to the second level, and Jakob Johnson kicks out the initial force defender, which creates a cutback lane for Harris. Harris reads the Bills defense over pursuing beautifully and is shot out of a cannon to the house.

The Patriots ran the same play to the scheme side on their two-point conversion, making it 8-zip.

After that, the Pats began using Buffalo’s aggressiveness against them in run situations.

Here, New England blocks a trap scheme where Karras lets his man through to Andrews, then cleans out the shaded nose tackle for a big third-down conversion with Brandon Bolden.

On their second-half field goal drive, McDaniels called “G lead” schemes where the frontside or play-side guard pulls as a lead blocker instead of the more conventional call where the backside guard pulls in power or counter.

If there’s anything we can use from this game offensively, it’s how the Pats physically imposed their will with their rushing attack.

Another element that’ll translate into future matchups is how the Pats defense limited the Bills offense and Josh Allen to -0.09 expected points added per pass play.

The Pats ran man coverage in the secondary, with Kyle Van Noy serving as a quarterback spy on the agile Allen here. When Allen breaks the pocket, KVN closes his space to force a throw, and Phillips makes a terrific late pass breakup to jar the ball loose against Knox.

On their critical fourth-down stop, New England ran an all-out zero blitz. Buffalo sends only three receivers into the pattern, with the Pats bringing seven rushers. But the tight end lets the inside threat (McCourty) through, and DMac pressures Allen into a throw to nowhere.

When the Pats were in zone coverage, they often forced Allen to hold the ball in the pocket by disguising those zone schemes before the snap.

Above, the Pats have the same defenders over those man coverage matchups and fall into cover-three. Then, they execute a coordinated rush plan to keep Allen from escaping the pocket and force him to step up into pressure for a sack.

Although Allen got free on a few scrambles, the Patriots mostly forced him to step up through the pocket rather than extending plays to the left or right where he’s the most dangerous.

Belichick once again proved that he can flummox Allen when he has the personnel to do so on defense.

In contrast to the Patriots’ winning strategy, Buffalo had to throw the football 30 times despite the conditions because the Bills couldn’t get anything going on the ground.

New England’s defense held the Bills to 3.2 yards per rush on 19 running back carries for a success rate of 14 percent, which gave Buffalo no choice but to throw the ball into the wind (Allen: 15-of-30, 145 yards).

Here, the Bills try to run outside zone, but the Pats press Buffalo’s offensive line into the backfield with Deatrich Wise and Kyle Van Noy on the strong side. Once those two hold it up, it allows nose tackle Davon Godchaux to work down the line and make the stop.

The above play was a regular occurrence when Buffalo tried to run the ball as the Patriots’ defensive front dominated in the trenches.

New England has a formidable two-headed monster that will drive the bus as the team heads into late-season football, where they’ll play more games in terrible weather.

The #Patriots adjusted to inclement weather and ran the ball on 94% of their plays, the highest run rate in a game in this millennium.

Rhamondre Stevenson and Damien Harris led the Patriots backfield and both finished with more rushing yards than expected.#NEvsBUF | #GoPats pic.twitter.com/drecVMw0Sz

According to NextGenStats, Harris and Stevenson ran for 86 rushing yards over expected against the Bills on Monday night. Both Pats’ backs ran with great patience behind their blocks, vision to see rushing lanes develop, and saved several runs from becoming negative plays.

Note: Harris left the game with a hamstring injury but was seen after the game and didn’t seem like a player who suffered a severe injury.

6. Don’t Read Too Much Into Mac Jones’s Three Pass Attempt Yet

Bill Belichick and Josh McDaniels deserve credit for sticking with the running game, but we all know the takes are coming saying it’s an indictment on Mac Jones’s arm strength. The Patriots did what they needed to do to win the football game, and if the Bills offense woke up, that might’ve forced their hand to throw the ball more. Since Buffalo never went ahead in the game, it’s difficult to assess whether or not the Pats trusted Jones to throw. Let’s reassess this conversation after the next bad weather game where the opponent pushes the Pats more to call passing plays. On the surface, it’s hard to argue that Belichick had full confidence in Jones to throw under these conditions, but Buffalo never made him throw it either.

The one snafu in the game for the Patriots coaching staff was the decision to have wide receiver N’Keal Harry field punts for the first time in his NFL career during a windstorm.

In the first quarter, Harry’s muffed punt set up the Bills on New England’s 14-yard line, and the Bills scored their lone touchdown of the game on the ensuing play (a -6.5 EPA swing for NE, second-biggest play of the game).

On the return, the Pats had All-Pro punt returner Gunner Olszewski as the up man to field a short punt even though Buffalo was punting with the wind. Harry was the deep returner, stumbled going back for the ball, then let it graze his helmet instead of getting out of the way.

Although it’s easy to blame Harry, the Pats’ coaches asking Harry to field a punt in those conditions for the first time is where the biggest piece of the blame pie goes.

8. Pats CB J.C. Jackson Holds His Own vs. Stefon Diggs

As we mentioned earlier, the Patriots played a significant amount of man coverage in Monday night’s win where Jackson drew the difficult assignment against Buffalo All-Pro receiver, Stefon Diggs.

Although there were some zone calls mixed in, Jackson held Diggs to 51 yards on four receptions and only one of those came against J.C. in man coverage.

Plus, Jackson nearly had a pick-six on a third down play where he anticipated Diggs stopping his route at the sticks beautifully. Jackson mirrors Diggs’ release, and knowing the situation (third-and-five), reads the route break and breaks up the pass.

After Diggs went crazy on Jackson in the Week 16 matchup a year ago, it must’ve been nice for Jackson to hold Diggs in check this time around.

The Patriots had two injury scares on defense that hopefully aren’t long-term issues. After walking off with trainers in the fourth quarter, Judon quickly returned to the game and held a post-game press conference.

As for Phillips, the Pats’ safety tweeted some words of encouragement that signal he dodged a bullet. Based on their on-field procedure, it appeared trainers were doing an ACL test on Phillips’ knee. But his tweet serves as an assurance that he didn’t suffer a severe injury.

With the Patriots heading into their bye week, we’ll keep an eye on all injuries moving forward.

Making the win even sweeter for the Patriots is that they’ll now get some much-needed rest as they head into a late bye week in Week 14, riding a seven-game winning streak. On the other side, the Bills have another high-stakes showdown with the Buccaneers next week. There’s a very real chance that the Pats come out of the bye with a two-game lead in the division.