Lazar: Ten Things We Learned From the Patriots’ 17-16 Loss to the Dolphins 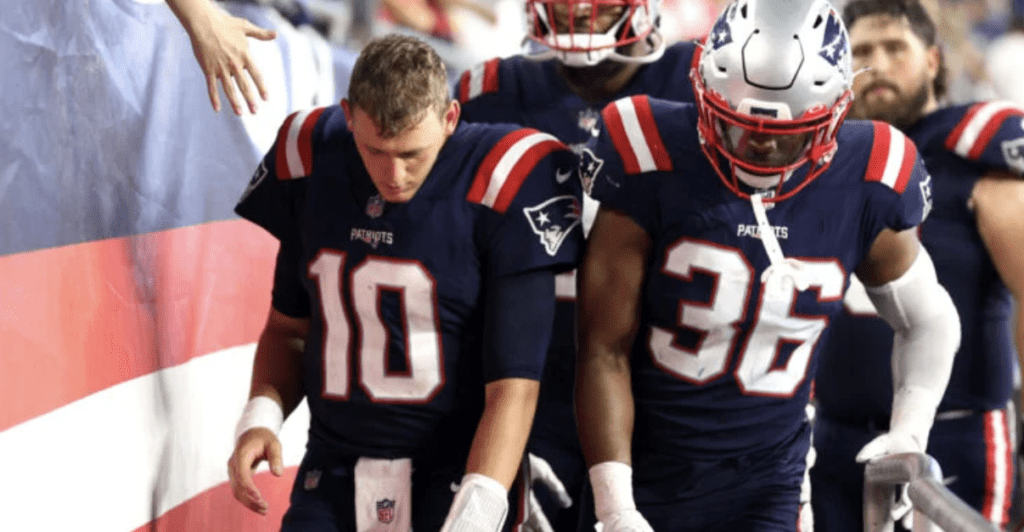 FOXBORO, MA — The Mac Jones era is off to a disappointing start, with the Patriots falling in the season-opener to the Miami Dolphins by a score of 17-16.

In an ending that felt similar to last year, New England took favorable field position after a Jonathan Jones interception and drove deep into Dolphins territory. However, the game slipped away when running back Damien Harris lost a fumble on the Miami 11-yard line with 3:35 remaining.

Finishing drives and games was an issue for the Patriots offense with Cam Newton under-center in 2020 and carried over to the opener with the Pats coughing up the football four times (two lost fumbles) and going one-for-four in the red zone against the Dolphins.

In defense of Mac and the offense, it felt like the play-calling was too conservative at times. Jones averaged 0.28 expected points added per drop-back, a positive output, but averaged just 6.1 air yards per attempt with a short passing philosophy.

Furthermore, the Dolphins matched the Patriots’ 12-personnel package with their base defense, yet the Pats spent most of the first half running the ball into the big Miami front.

On a positive note, rookie Mac Jones continues to prove he’s a long-term answer at quarterback and played very well in his first career NFL start.

Still, Jones was the first to tell us that the offense has a long way to go.

Here are ten things we learned from the Patriots’ 17-16 loss to the Dolphins in Week 1:

(Huge shoutout to the very best highlight thread follow in the business, @FTBVids_YT)

Despite the final score, Patriots rookie quarterback Mac Jones was impressive in his first career start. Jones finished the game with a 68.6 QBR and a +7.7 completion percentage over expected, high marks across the board.

The Pats’ rookie got the offense into the proper protections and plays against several blitzes. Above, James White picks up the slot blitz, and Jones reads the two-high structure to thread a dart to Nelson Agholor in between the safeties.

New England’s first-round pick then dropped a beautiful dime on a wheel route to White. Jones recognizes the linebacker dropping with White off the line of scrimmage in man coverage and attacks the matchups.

Mac also had several downfield throws where he took a huge hit in the pocket and still delivered completions while under pressure.

After the loss, the rookie spoke about how the offense needs to improve, but Jones once again looked the part in his first time out.

The Patriots’ offense was deep in Miami territory when Damien Harris fumbled the ball, and the game, away in the fourth quarter. Stevenson also fumbled early on in what looked like a promising start to New England’s second drive. You won’t win very many football games when you fumble four times. Stevenson might not be ready. He also got run over on a blitz pickup by Elandon Roberts on a bogus roughing the passer call.

3. Pats Corners Give Up Too Much Underneath

There were two big plays to DeVante Parker and Jaylen Waddle on deep passes. But the corners on the Patriots gave up way too many quick slants and then failed to get the Miami receivers on the ground. Surprisingly, the Patriots played more off-man coverage in this one rather than their typical press-man coverage.

Speaking after the game, cornerbacks J.C. Jackson and Jon Jones said the plan was to mix it up on Tua, but the Miami QB had the option to quickly throw it out when he saw certain coverages. To Tua’s credit, he timed those quick throws perfectly. The 13-yarder to Parker on Miami’s game-icing drive was tough. Bailing at the line and bailing them out of a 1st-and-14 from Miami’s own five.

4. Patriots’ Defensive Front Does its Part Against Miami’s Offensive Line

We discussed the mismatch with the Patriots’ defensive front against Miami’s offensive line all week, and New England indeed dominated.

Here, the Patriots run a replacement blitz where linebacker Kyle Van Noy drops off the edge into coverage while safety Adrian Phillips blitzes up the middle. Matt Judon gets inside penetration, Phillips wraps around it, and they swarm Tua to force an interception on third down.

Although the Pats’ secondary had some issues, the defensive front did its job on Sunday. Second-round pick Christian Barmore contributed with a few nice pushes of the pocket as well.

Patriots offensive coordinator Josh McDaniels didn’t waste any time putting his two new tight ends on the field together. Hunter Henry and Jonnu Smith were on the field together on 32 of New England’s 70 offensive plays, with 31 of those in 12 personnel. The duo combined on eight catches for 73 yards, which wasn’t exactly lighting the world on fire.

Still, there were flashes. Here, the Patriots get tight end Hunter Henry isolated in man coverage on an option route. Henry likely has the choice to break off leverage on this route. With the defender sitting outside of him, he breaks the route off inside, and Jones hits him with the pass. Smith was also open for a big play at one point, but Jones missed him.

New England will need more out of their two tight end packages to get their offense going.

The Patriots opened the game with a 35-yard run by Damien Harris that was an entire offseason in the making. Harris ran behind a right side that featured Trent Brown (RT), Shaq Mason (RG), and both tight ends.

You’ll also see a great climb to the second level by center David Andrews on the play. Andrews puts himself through to the second level with nobody over center, Mason and Brown turn their guys out, and Harris has a huge hole. Just how they drew it up on the whiteboard.

Unfortunately, Brown went out of the game early on with a calf injury, and his status will be worth monitoring moving forward.

7. Third Down Defense Dominates, Early-Downs Not So Much

In a theme that continues over from last season, it’s evident that the Patriots’ third-down defense is still dynamic when they’re getting into manageable down and distances. However, making plays on early-downs defensively is the first step to getting into those favorable exotic rush and coverage situations. The Patriots gave up a success rate of 50% on early-downs on Sunday, which made for some easy third downs for Miami. On third downs where the Dolphins had to pass the ball, they had a success rate of 12%. The Patriots need better early-down defense to get teams into obvious passing situations.

Pats wide receiver Nelson Agholor had a nice debut. Agholor was on the same page with Jones a few times in blitz situations where the quarterback was “hot” on the play, ran a well-paced route on his touchdown, and made a great diving grab between the numbers.

The Dolphins were in a two-high coverage shell on the diving catch, and Agholor dove in front of the oncoming safety to beat the defender to the spot. The Pts will take that kind of production from Agholor.

One of the breakout players of the preseason for the Patriots is second-year linebacker Josh Uche. Uche had a monster sack at the end of the first half.

On the play, Uche uses a speed-to-power rush, and left tackle Liam Eichenberg steps on the left guard’s foot, making this display of power look even better. Eichenberg tripped, but it’s still an explosive play by Uche.

As we know, the Patriots have a hole at outside corner. Jalen Mills had some good and bad moments. His pass breakup in the end zone was a great recovery and play on the ball. But Mills gave up too many plays underneath and was in on a few coverage breakdowns. Joejuan Williams was a step behind on far too many plays, and we continue to see this secondary miss Stephon Gilmore.