Lazar: Ten Things We Learned From the Patriots’ 24-6 Victory Over the Panthers

The Patriots pull closer to the Bills in the AFC East with third-straight win. 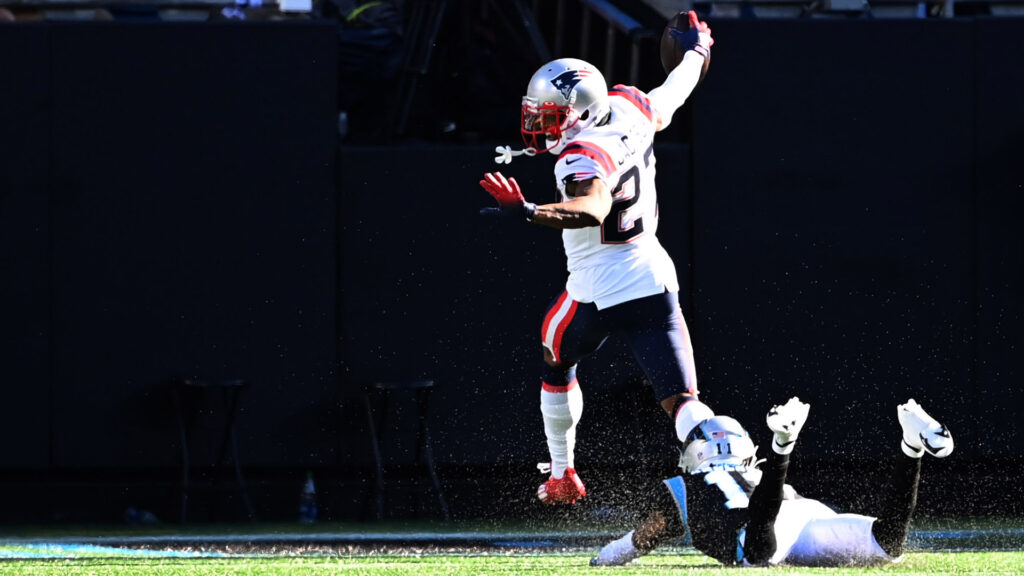 The Patriots are officially on a winning streak with a 24-6 victory over the Panthers on Sunday.

Patriots head coach Bill Belichick’s team has won three in a row, and four of their last five, with back-to-back shut-down performances by New England’s defense in a familiar winning formula.

Belichick’s defense completely locked down the Panthers’ offense by intercepting quarterback Sam Darnold three times, including a pick-six by cornerback J.C. Jackson in the third quarter.

New England held Carolina to -0.51 expected points added and 4.2 yards per play, ran the ball for a season-high 151 rushing yards, and won the game despite only attempting 18 passes.

Although it would be nice to see Mac Jones light up the scoreboard, the Pats won in Carolina with a more reflective blueprint of what Belichick had in mind for Mac’s rookie season.

After an active offseason, Belichick’s vision was to lessen the burden on his first-round quarterback and win football games with all three phases rather than putting it all on Jones.

The Pats will need more than 139 passing yards to win consistently, but it has to make Jones’s development easier that he doesn’t need to put the team on his back every week to get a W.

Here are ten things we learned as the Patriots improve to 5-4 on the season:

Patriots head coach Bill Belichick is finding a formula defensively by keeping opposing quarterbacks off-balance with a mix of man and zone coverage.

The Pats have always mixed in some zone. But now they’re playing more zone than in the past, making it difficult for opposing quarterbacks to read the defense before the snap.

Here, Darnold reads the post-safety structure with off-coverage on the boundaries and moves his eyes to the outside receiver on a deep curl route at the top of the screen. However, Pats safety Kyle Dugger drops off the line of scrimmage underneath D.J. Moore’s route, and Darnold has to hold the ball in the pocket as it collapses around him.

With the Patriots’ secondary sans Stephon Gilmore having issues in man coverage, Belichick is adjusting to his versatile, ball-hawking secondaries’ strengths with more zone.

The results are fewer big plays in the passing game and less stress on the Pats’ cornerbacks to track talented receivers in man coverage.

One of the reasons the Pats’ zone coverages are working is because rookie defensive tackle Christian Barmore and linebacker Matt Judon are leading a potent pass rush in recent weeks.

By getting home without blitzing, New England’s defense keeps the numbers in coverage to make it difficult for quarterbacks to find openings in their zone structures.

Plus, as was the case here, Barmore and company are aiding the coverage by disrupting the quarterback when there are openings in the secondary. In the play above, Barmore’s initial arm-over move is stalled, but the Pats’ rookie converts into a bull rush to collapse the pocket on Darnold, deflecting the pass at the line of scrimmage. If Darnold’s pass gets through, he has a wide-open Christian McCaffrey downfield for a touchdown.

Belichick’s defense was in zone coverage on J.C. Jackson’s pick-six as well, and Barmore and Judon are on the scene again. This time, Barmore impressively hurries Darnold by chasing after the Panthers quarterback on the bootleg. Then, Judon gets in Darnold’s face when the tight end blocking him releases upfield, and the pressure leads to an errant throw.

Another reason New England’s transition to more zone coverage on defense makes sense is that it allows Jackson to ballhawk.

Jackson’s pick-six was an example of how effective he can be when he has eyes on the quarterback to read the throw direction and make a play on the ball as a zone defender.

On Jackson’s second interception, the Pats’ corner showed off his press-man abilities by smothering D.J. Moore’s corner route from the number three spot out of the slot. Moore’s alignment gives him a lot of space to run his route, but Jackson is all over it.

After missing practice due to an illness, Jackson said after the game that he wasn’t sure if he’d play on Sunday until the end of the week. Well, the Pats are happy that he was out there.

The Patriots’ three-headed monster at running back in Damien Harris, Rhamondre Stevenson, and Brandon Bolden accounted for 220 of New England’s 273 total yards, or 80.6 percent.

Here, the Pats use their crack toss scheme to get rookie running back Rhamondre Stevenson around the corner with good crack blocks by Jonnu Smith and Kristian Wilkerson, allowing fullback Jakob Johnson and left tackle Isaiah Wynn to lead the way for Stevenson.

Once Carolina began allocating resources to protect against outside runs, the Patriots found more success on runs between the tackles with draw plays and man blocking schemes.

The only negative for the Patriots’ running back’s performance was that Harris and Stevenson suffered head injuries in the fourth quarter on Sunday.

Patriots quarterback Mac Jones is in a little bit of a slump, but the rookie has done enough on third down and in the red zone to win.

After struggling with his downfield accuracy a week ago, Jones’s decision-making was more of a concern this week. Jones threw an ill-advised interception to former Pats cornerback Stephon Gilmore on a pass that Mac shouldn’t have thrown.

Earlier, Jones appeared to have running back Brandon Bolden open over the ball with a blitzing linebacker vacating the middle, leaving the defender on Bolden out-leveraged. Instead, Jones holds the ball in the pocket, and Panthers pass-rusher Brian Burns registers a strip-sack.

On a positive note, Mac’s best throws were against Carolina’s man coverages, where he found advantageous matchups.

Here, Jones hits Bolden on his longest air-yard completion of the afternoon (28 yards) when the Pats running back is isolated on linebacker Shaq Thompson on the wheel route on third down.

The Panthers bring a blitz on this third-down play, and Jones finds tight end Hunter Henry behind the blitzing linebacker on an in-breaker against A.J. Bouye in man coverage.

The Pats need their quarterback to be more consistent down-to-down, but the flashes are still there for Mac.

Along with his contributions in the running game, Stevenson was the Patriots’ leading receiver with the longest play of the day on a 41-yard catch-and-run.

The Panthers are in man coverage in the play, and the Pats are in their “Go-Go” formation with two running backs in the backfield. The two route releases from the backfield get Stevenson matched up on defensive end Morgan Fox, and Stevenson wins that foot race easily.

Again, we’ll need to monitor Stevenson’s injury situation as we head into next week’s matchup with the Cleveland Browns. But the rookie running back has an impressive all-around game.

Following Sunday’s game, one talking point was left tackle Isaiah Wynn’s struggles this season after being in the middle of Burns’s strip-sack.

Without knowing the protection call, it’s difficult to say who’s at fault here. And as we mentioned earlier, Jones could’ve beaten the blitz with a quicker release to Bolden. Still, Wynn is late to get his eyes back outside because he either thought Hunter Henry would hold his block longer, underestimate Burns’s explosiveness, or possibly both.

In all likelihood, Wynn was confirming that the Panthers weren’t blitzing in his direction, knowing he had a half-beat to get back outside to Burns with Henry’s check-and-release.

Unfortunately for the Pats’ left tackle, Burns’s closing speed is rare, and Wynn was too late to set outside and pick up Burns before he got to Mac.

8. Pats LB Dont’a Hightower All Over the Line of Scrimmage

The narratives heading into the week were that Hightower isn’t the same player. But the Pats’ linebacker was disruptive on Sonday.

Here, Hightower recognizes the Panthers’ outside zone blocking scheme and goes right through the left guard to the ball carrier to stop Chubba Hubbard for a short gain.

As Belichick noted last week, Hightower is a thumper. He’s not a coverage linebacker that can stick with Christian McCaffrey in space. That’s just not his game.

Evaluating Hightower on his weaknesses in coverage misses what he brings to the Patriots defense when he’s used properly as a downhill player in the run game and as a pass rusher.

Henry shows off his physical route-running style by releasing upfield on a vertical stem to eat up the cushion with the defender in off-coverage and sitting down on the goal line to box out at the catch point to secure the catch.

Henry is doing exactly what the Patriots envisioned he’d add to the offense when they signed him in March as a free agent: a go-to target for Mac on third down and in the red zone.

10. Jaguars Deliver a Gift to Patriots With Upset Win Over Bills

Taking a quick look around the NFL, the Patriots pulled within one game in the loss column of the division-leading Bills after the Jags stunned Buffalo in Week 9. The Pats will play the Bills twice down the stretch. Plus, Buffalo came into the week with the fourth-hardest remaining schedule in the NFL, according to Football Outsiders. The division is in play.