Lazar: Ten Things We Learned From the Patriots’ 25-22 Win Over the Texans 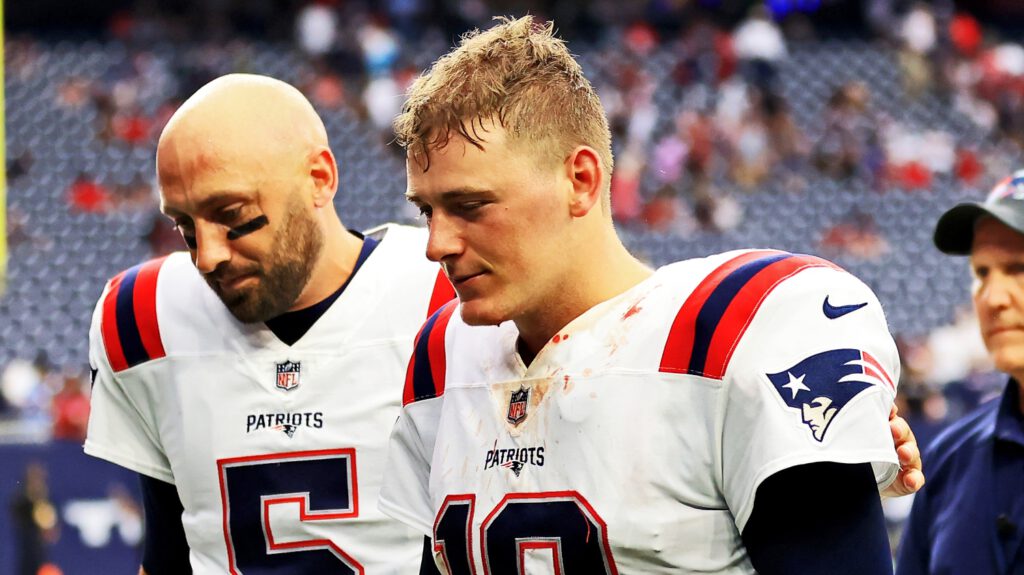 The Patriots (2-3) recovered from a horrific first half to win ugly over the Houston Texans (1-4) on a late Nick Folk field goal in a 25-22 victory.

On the one hand, rookie quarterback Mac Jones and the Pats offense rattled off 13 unanswered points in the second half to essentially save the Patriots’ season by all intents and purposes.

Although it’s hard to declare it over after just five weeks, digging out of a 1-4 start is suboptimal. Instead, the Pats climbed closer to .500, showed some fight, and the train stayed on the tracks.

On the other hand, the first 33 minutes against a Texans team undoubtedly headed to a top-ten draft pick was lousy football; bad ball security (Harris fumbles again), bad pursuit angles and technique in the secondary, and bad situational football on both sides of the ball.

The Pats somehow made themselves look worse in those 33 minutes than Houston, who might not win another game this season unless veteran Tyrod Taylor puts them out of their misery.

Bill Belichick’s team’s expectations and aspirations are higher than barely squeaking out a win over the Texans. If the Pats see themselves as a playoff team, that was unacceptable.

Nevertheless, a win is a win, and they avoided a disaster by mounting a comeback. Now, enough is enough because this team’s talent level is too good to play like that again.

Here are ten things we learned as the Patriots improve to 2-3 on the season:

Patriots quarterback Mac Jones wasn’t perfect in Sunday’s win, but the rookie continues to make enough plays to put the team in a position to win. Mac is a net positive and is helping the team win. Remember, Jones has now put the offense in a position to take the lead late against Miami in Week 1 (Harris fumble), Tampa Bay in Week 4 (Folk missed FG), and finally pulled off the comeback victory this week.

The first aspect of Jones’s game that stood out was his efficiency off play-action, where Mac was 9-for-11 for 11.6 yards per attempt.

In the play above, The Pats use a fullback lead fake to pull the linebacker level down, and Jones’s quick release to get rid of the ball as he hits the top of his drop doesn’t give the linebackers enough time to recover underneath Meyers’s in cut.

Mac was also excellent on third down by converting 7-of-10 pass plays on the money down.

Here, Jones sees the underneath linebacker widen to the running back’s release into the flat, which opens the passing lane to Hunter Henry. All Mac has to do at that point is get the ball to his tight end before the post safety breaks up the pass, and he moves the chains.

The Patriots finally let Jones throw the ball into the end zone inside the 20, and he didn’t disappoint. Mac holds the underneath coverage by staring down Meyers’s route in the flat then dropping a pretty floater over the coverage to Hunter Henry for six.

There was one interception that might fall on the receiver and a few close calls from Jones. Still, his compete-level and accuracy continue to impress everyone in the building.

Outside of linebacker Matt Judon, Bill Belichick’s defense looked utterly emotionless in the first 33 minutes of this game. Defenders in the back seven covering grass more than Houston receivers, undisciplined pursuit angles and reads, and just little effort all around. However, they made enough stops late in the game to give the Patriots a chance to win.

The one defensive structure that is saving the Pats’ bacon right now is their simulated pressure package. New England lines seven threats up on the line as potential rushers. At the snap, they drop three players into coverage and rush four. By dropping those three defenders into short zones, it’s causing the quarterback to hold the ball. With Mills expecting a blitz, he’s looking over the middle for his “hot” to beat the pressure. Instead, those short zone defenders are falling underneath the hots, and Mills has to hold it.

The first step for the Patriots’ defense is eliminating the lazy big plays we saw against the Texans. Once they iron those things out, the schemed stuff is still working at a high level.

New England’s defensive captain had a rough day against the Texans. McCourty was in the middle of Houston’s two biggest pass plays. Although he wasn’t the primary coverage defender, McCourty’s job as the deep safety was to limit the damage.

DMac completely ran himself out of the play on the 67-yard touchdown to Chris Moore, another instance where he needs to play the receiver rather than the ball.

On the 40-yarder on fourth-and-two, McCourty goes for the ball as he streaks over from his post safety position instead of the receiver. In that instance, you want to see McCourty make the tackle rather than take a chance on the interception.

McCourty knows better than anyone that those big plays can’t happen as the last line of defense.

The most significant drop-off due to injury or illness wasn’t along the offensive line. Instead, it was losing Jalen Mills to a hamstring injury forcing Joejuan Willians into the starting lineup.

Most of the Patriots’ secondary fell for the flea-flicker, but Williams was on the backside of the play as secondary edge force, yet he still was over-aggressive playing the run and got burned.

Earlier in the game, Williams gets moved off his spot (outside leverage) to open the outside break and gets spun around in off-man coverage. To his credit, Williams made a touchdown-saving tackle that saved the Pats four points. But that was an ugly rep.

After trading Stephon Gilmore, New England needs good health at cornerback because Williams isn’t cutting it at outside corner.

5. Did Backups on the Pats’ O-Line Earn More Playing Time?

We’ll have to wait until reviewing the coaches tape before we crown the offense line. But they were far from an issue against the Texans despite playing without four starters. The Pats ran the ball well enough with a 39 percent success rate on the ground, and Mac was sacked once with only four QB hits for the Texans. Given the circumstances, that was pretty darn good. If the film review is friendly, it’ll be interesting to see if any of the backups that played today earned more playing time. Based on our live viewing, guard Ted Karras and tackle Yodny Cajuste were solid. Maybe the Pats come back with a combination involving one of those two, and it steadies the ship. Two potential options:

In his first season with the Pats, Judon is emerging as the leader and by far the best player on Bill Belichick’s defense. He was the only big-name defender that showed up, saving the game with two sacks in a three-play sequence to force a field goal at the end of the half.

Judon shows excellent discipline on the first sack to contain Mills on the boot/rollout play, and then he beats the right tackle with an inside move to find Mills for another sack two plays later.

We see it in everything Judon does, from his press conferences to lightening the mood in the locker room to setting the tone on game day. The rest of the defense needs to follow the leader.

Patriots rookie quarterback Mac Jones and tight end Hunter Henry have something brewing. Henry was on the other end of the game-tying touchdown, caught a few quick-hitting routes over the middle to move the chains, and was effective off play-action concepts.

Remember these plays early in the year if the Patriots turn their season around.

The Patriots had two opportunities to swing the game in their favor, and offensive coordinator Josh McDaniels tightened up the play-calling at the worst possible time.

First, Houston tried to get the Pats to jump offsides on one of the worst special teams plays we’ve seen since the Colts’ infamous fake punt in 2015. Despite Houston handing the Pats the ball on the Texans’ 36-yard line, McDaniels called two straight runs that netted zero yards and a screen on third-and-ten. New England would kick a field goal on that drive.

Belichick’s defense finally stopped Davis Mills and the Texans to get the ball back to Mac Jones on the ensuing drive. Jones hit passes of 20 (to Agholor) and 21 yards (to Henry) to get the offense inside the red zone. Then, McDaniels called three-straight screen passes to nowhere, leading to a 32-yard field goal by Nick Folk.

There’s nothing to justify why McDaniels won’t let the rookie quarterback attack the end zone, and once they let Mac throw, he threw a dime for six to Hunter Henry. Let Mac cook.

Patriots running back Damien Harris bounced back with physical runs in the second half. But there’s no sugarcoating it: the Pats’ running backs have a fumbling problem. Harris’s fumble as he headed into the end zone to take the lead in the first half was a killer turnover. Harris’s late fumble cost New England the game in Week 1, and it seems that the only New England ball carrier who can protect the ball is Brandon Bolden. Unfortunately, Bolden is the least dynamic runner out of the group. Ivan Fears has some work to do.

In his first game without Stephon Gilmore on the roster, Jackson elevated in a trail technique to intercept a Davis Mills pass. Unfortunately, Jackson miss-timed his jump, and the ball sailed over his head. Devin McCourty takes a bad angle to the receiver, and it’s a 67-yard touchdown.

Before that, Jackson was called for pass interference when Brandin Cooks beat him at the break point, and Jackson gave up a completion on fourth-and-short to Cooks.

However, Jackson leveled off as the game progressed and made a big pass breakup on third down another slant by Cooks. The Pats continue to have their corners bail at the line in fourth down situations, and opposing quarterbacks are taking the easy conversation.

In Jackson’s pass breakup, he plays Cooks in a press-man technique, gets his hands on the speedy wideout, and doesn’t get moved off his spot to finish through the catch point.